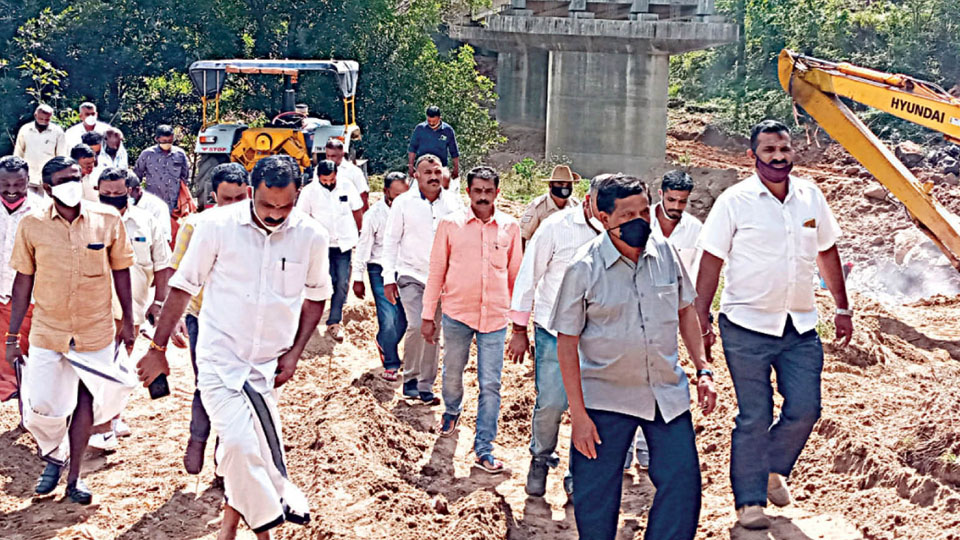 Virajpet: Virajpet MLA K.G. Bopaiah recently inspected the work on a bridge across Kootupole near Makutta which provides connectivity between Karnataka and Kerala.

The bridge is at the Karnataka-Kerala border and is part of the Kerala State Transport Project (KSTP) road between Thalassery and Valavupara. The bridge work has resumed as Karnataka Wildlife Board has decided to give permission for the construction of the bridge.

The old bridge, built during the British era across Kootupole, has been providing interState connectivity at Makutta and it was narrow and in dilapidated condition. With the construction of Kannur International Airport, the density of vehicles on the old bridge had increased. To provide connectivity to the Airport, the Kerala Government had developed a 55-km road at an estimated cost of Rs. 360 crore till Kootupole.

However, the Karnataka Forest Department had stalled the work in 2017 considering that the land belonged to Brahmagiri Wildlife Division. Now, the work has resumed once again.Though the claim of Kerala was that the river is in its territory, the Karnataka authorities claimed that a portion of the bridge is in Brahmagiri Wildlife Sanctuary in Karnataka and also they claimed that half the river belongs to them, following which the work had to be stopped.

The project has already missed many deadlines. Though Kerala had given the documents to assert its right over the river and the officials held meetings at various levels, there were many objections on the part of Karnataka authorities. This road is a major link between Kerala and Karnataka and it would be beneficial for the residents in many parts of Karnataka, including Kodagu to come to Kannur Airport.

The Central Government cleared the hurdles for the bridge and the work has commenced. The MLA said that the Central and State Governments have given conditional approval for the work on the bridge. The completion of the bridge will benefit passengers travelling to Mysuru and Hassan from Kodagu.