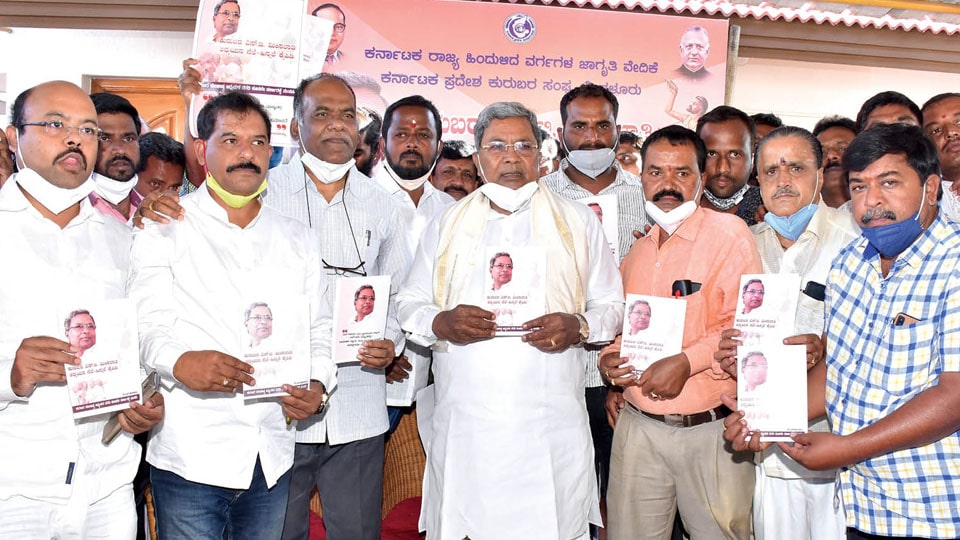 Mysore/Mysuru: Opposition Leader and former Chief Minister Siddharamaiah has urged the State Government to commission an ethnographic survey of Kuruba community, which has been demanding inclusion in Scheduled Tribe (ST) category.

He was speaking after releasing a booklet on ST reservation for Kuruba community brought out by Karnataka Pradesha Kurubara Sangha, at a programme jointly organised by the Sangha and Karnataka Rajya Hindulida Vargagala Jagruti Vedike, at his (Siddharamaiah) residence in Ramakrishnanagar here recently.

Urging RDPR Minister K.S. Eshwarappa, who is spearheading a movement seeking ST tag for Kurubas, to convince the Government to commission the survey, Siddharamaiah, who himself is a member of the community, said that the report of the survey must be tabled before the Assembly for approval, following which the State Government must formally submit its recommendation to the Union Government. He announced that he himself would lead the movement if the Centre then refuses to include Kurubas in the ST category. He further said that apart from Kurubas, all other tribal communities too must be included in ST list.

Maintaining that as Chief Minister in 2016, he had released Rs. 40 lakh to Karnataka State Tribal Research Institute at Mysuru for carrying out the survey, he said that the Institute had failed to come up with a report. Now, the present Government must commission an ethnographic survey and get the report, he said and added that the Government cannot make a recommendation to the Centre in the absence of such a survey report.

Reiterating his charge that the RSS was driving the campaign headed by Eshwarappa, he alleged that the BJP was making attempts to divide the Kuruba community for electoral gains. He also accused the RSS of trying to drive a wedge among AHINDA communities in the guise of supporting ST tag for Kuruba community.