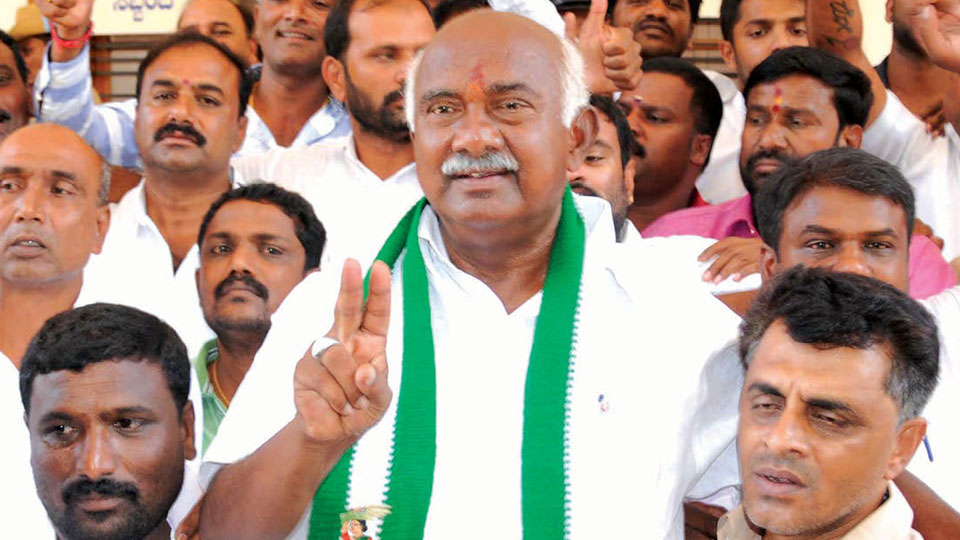 Mysuru:  Former Minister Adagur H. Vishwanath, who was fed up with the functioning style of Congress leaders and had quit the party last year to join the JD(S) registered a comfortable victory over Congress candidate H.P. Manjunath by a margin of 8,575 votes.

Vishwanath who had openly ridiculed the working style of Chief Minister Siddharamaiah and come out of the party, contested from Hunsur where there are 2,24,558 voters.

On May 12 election, 1,85,342 voters had exercised their franchise recording 82.54 per cent voting. Including the Congress, BJP and JD(S), a total of 15 candidates were in the fray. However, Vishwanath managed to overcome all of them and register a victory.

His rival Manjunath had already won twice in this constituency and was planning on a hat-trick. The leaders of all the three main parties canvassed in Hunsur for their respective candidates. But the preferred choice of the Constituency voters was Vishwanath. The final 20th round saw Vishwanath ahead as he recorded 91,667 votes, while his main rival Manjunath had to be satisfied with 83,902 and Ramesh Kumar was a distant third with 6,406 votes. Finally, Vishwanath emerged a satisfying winner.

Siddharamaiah’s arrogance dented: Adagur H. Vishwanath who addressed the press persons yesterday after his victory was announced said, “The election results in Mysuru district is a befitting reply to the arrogance shown by Chief Minister Siddharamaiah throughout the election campaign.

The voters in Chamundeshwari have taught him a befitting lesson. And also his claims that he is the end all and be all of everything have been punctured. The regional party JD(S) has emerged with highest number of winners in the district thus putting the CM in his place.”

He also thanked his voters, supporters and party workers for his win.