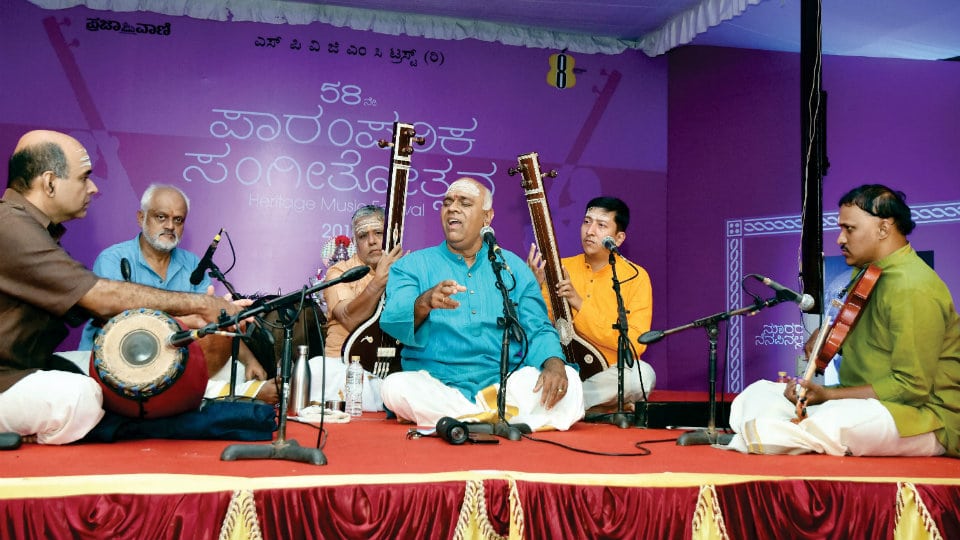 On the 4th day of the Music Festival at 8th Cross, V.V. Mohalla, Vijay Siva gave a vocal recital with his younger brother Manoj Siva on mridanga, Trivandrum Sampath on violin and G.S. Ramanujam of Mysuru on ghata.

Unstinted devotion to traditionalism, utter conviction, distinct clarity in diction, and a total commitment to classicism make Vijay Siva’s music appealing to classical music lovers. He has employed his own knowledge of his guru DKJ’s style, internalised from years of learning and practicing how a composition is to be rendered. In his music, the listeners feel that he knows the meaning of the songs word by word. Consider his rendering of ‘Ninnu vina Mari Galada’ in Reetigowla by Tyagaraja or ‘Shree Kamakoti Peethasthite’ in Saveri by Shyama Shastri. Raga delineation of Begade was glorious bringing ‘Abhimanamennadu Galgu Rama’ by Patnam Subramanya Iyer. ‘Tappulenniyu Talukonnu Chamundeshwari’ in Bhowli was morale-boosting.

Kharaharapriya, one of the main attractions was open-throated and treated with an in-depth elaboration. ‘Chakkani Raja Margamu’ by Tyagaraja saw an enjoyable garland of neraval and swaras weaved into the composition. Vijay Siva selects the neraval line carefully so as to bring auspicious and pleasant words to the ear. ‘Kantiki Sundaratara magu Roopame,’ the first line of the charana of the composition was chosen for neraval. Trivandrum Sampath played with enthusiawsm and gave the requisite support to the vocalist.

Rising to the occasion (Centenary celebrations of Jayachamaraja Wadiyar), the vocalist also presented a composition of Mysore Maharaja Sri Jayachamaraja Wadiyar in Kannada Raga — ‘Shree Chamundeshwari Devi.’ The RTP in Purvikalyani was expressive and sincere with no frills. The first line of Poochi Srinivasa Iyengar’s kriti ‘Parama Pavana Rama Papa Vimochana’ was chosen as the lyrics of the pallavi, which was set to Trishra Triputa Tala, Mishra Nade.

A shloka on Rama followed after taniyavartanam by Manoj Siva (whose mridanga had a shruti problem in the initial stage of Taniyavartanam) and Ramanujam. The shloka in ragamalika describing Rama in Purvi Kalyani, Hameer Kalyani and Abheri led to Mysore Vasudevacharya’s ‘Bhajare Manasa Shri Raghuveeram.’ Purandara Dasaru’s ‘Swami Mukhya Prana’ in Yadukula Kambhoji on Lord Hanuman and a Tulasidas Bhajan — ‘Janaki Natha Sahayaka Re Jab’ concluded the concert. Vijay Shiva had his equally music-literate mridangist as accompanist for the day. That Vijay Siva never refers any paper or book during his rendition makes his concerts even more revered.