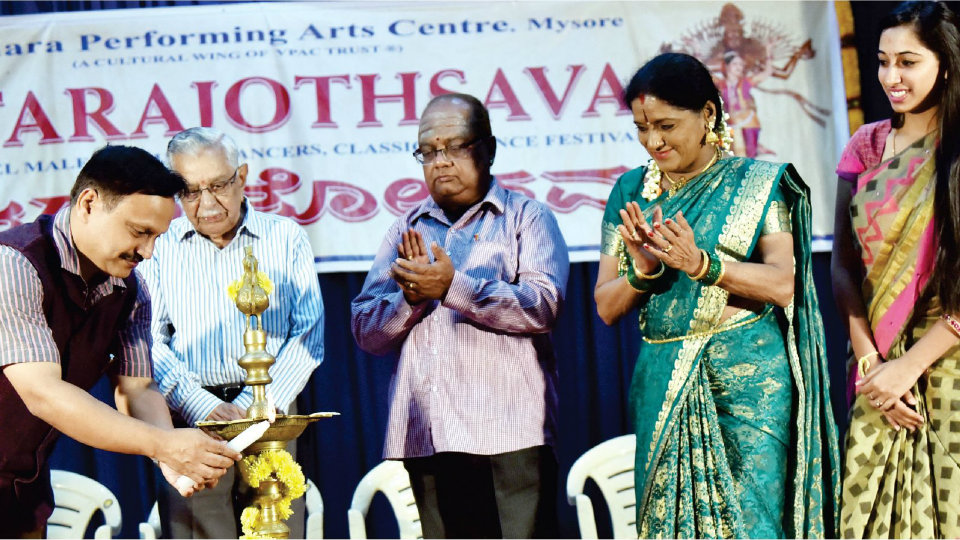 The inauguration was followed by a Kathak recital by  Pt. Rupesh Kumar Gupta from Darbhanga. He portrayed both the aspects of Kathak like Abhinaya, Nritta in the performance. His grip on tala was excellent. He was ably accompanied on tabla by Pt. Subhir Thakur, on vocal & harmonium by Pt. Pradeep Banerjee and on sitar by Pt. Sandeep Niyogi. It was followed by Bharatanatyam recital by Vidu. M.S. Sindhu Rao, Vidu. M.S. Bindu Rao and Vid. Pavan Kumar from KSGH Music & Performing Arts University. 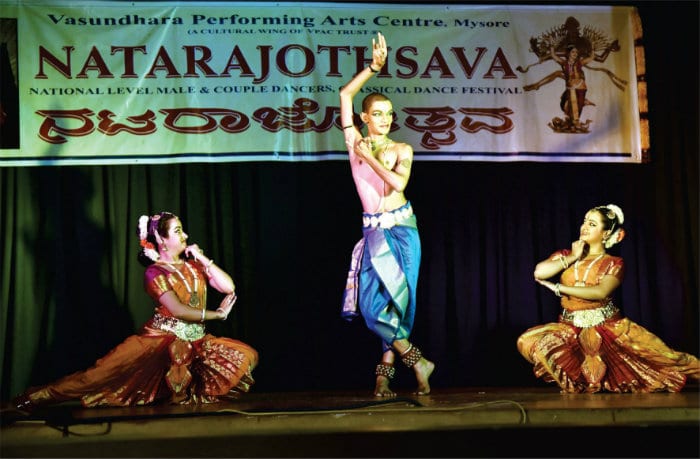 The choreography was excellent. The Angashuddhi of all dancers was great with the beautiful portrayal of Sanchari Bhavas. Since the festival was dedicated to Lord Shiva, many compositions were dedicated to the Lord of dance. The major dance piece of the performance — the Padvarna — was dedicated to Lord Krishna, composed in Raga Atana set to Adi talam. The Sanchari Bhavas or story Narratives where presented with grace. Dr. Chetana Radhakrishna accompanied the trio on vocal, on natuvanga was Dr. Chaitra Rao, mridanga by Vid. Nagaraj, violin by Vid. Tandava Murthy, flute by Vid. Rakesh and rhythms by Vid. Vinay Rangdol. Overall it was an enthralling performance. 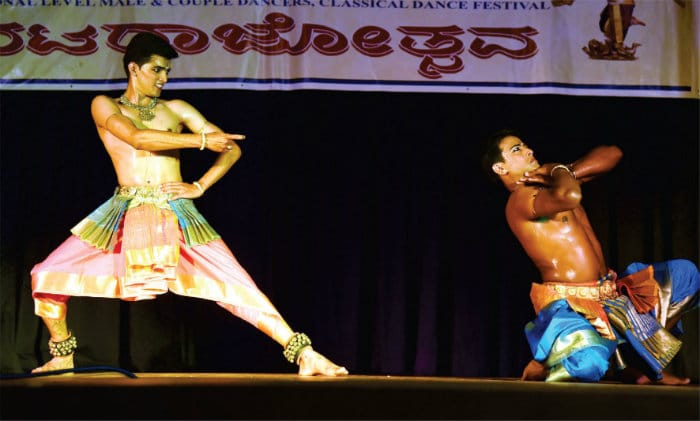 Day-2 began with a Bharatanatyam duet by Vid. Varun Sharma and Vid. K. Tejesh, disciples of Vid. Praveen Kumar, who is a well-known Bharatanatyam dancer, a guru and the Director of Chithkala School of Dance, Bengaluru. The duo performed many pieces depicting various forms of Lord Shiva. The choreography and selection of items in the presentation were excellent. Guru Vid. Praveen himself accompanied the duo on natuvanga, on mridanga Vid. Nagaraj, vocal by Vid. Karthik Hebbar and on violin was Vid. Mandya Nagaraj. The execution of nritta and abhinaya was neat. 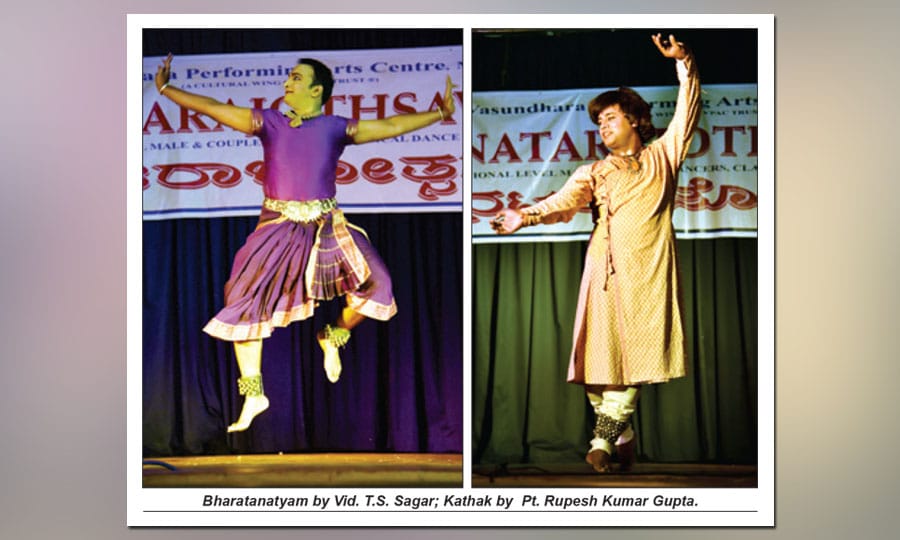 Followed by the duo was a Bharatanatyam recital by Vid. T.S. Sagar, who is an Assistant Professor, Department of Architecture, in Tumakuru. He was able to prove the balance between his profession and his passion through his performance in Natarajotsava. He presented a Padavarna based on Ramayana in Raga Ramapriya set to Adi tala composed by Mahesha Swamy. All the characters he portrayed were justified with excellence. He also presented a Jaavali in Raga Behag set to Adi Tala. A Vachana of Basavanna in Raga Hamsanandi.  The Jaavali is basically a female-oriented piece where the heroine expresses her pain and agony. But Vid. Sagar portrayed the feelings of a hero trying to console the heroine through Jaavali. His experience and excellence were very well exhibited through his performance. He was accompanied by Vid. Ananth Vikram on natuvanga, Vid. Raja Vikram on vocal, Vid. Nagraj on mridanga and Vid. M.P. Arjun on violin. 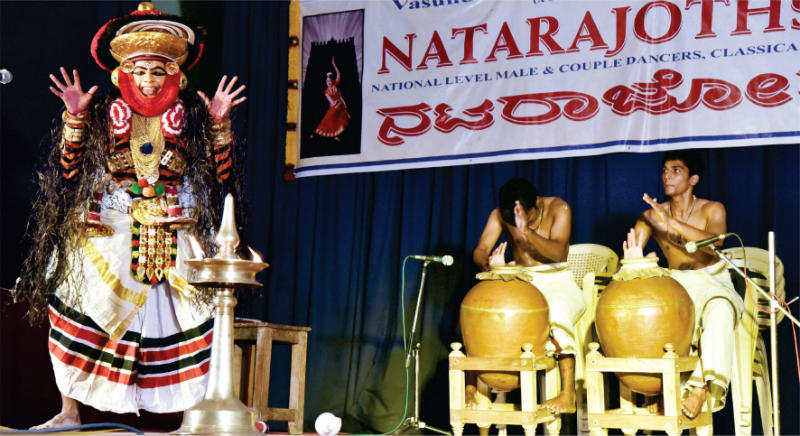 The youngest performer of the edition of Natarajotsava, Vid. Ammannur Madhava Chakyar started day 3 with a Koodiyattam recital. Efficiently portraying the character of Bheema with a wonderful Aaharya, a blend of make-up and costume. Choreography was very beautifully done. The portrayal of the characters like Bheema, Draupadi, the Elephant, the Lion and the Python through Gatibedha was great. He was ably accompanied on Milavu by Kalamandalam Rahul and Kalamandalam Vijay who gave an excellent support perfectly blending with the dance. The concluding performance of the festival, a Kuchipudi duet by Vid. Venkata Sai Satvik Bhagavatam and Vidu. Manisha Guda. The choreography was done by Vid. Vijayawalli Bharadwaj, an excellent dancer, choreographer and a great guru, she herself accompanied the duo on vocal and natuvanga. The performance was filled with energy and fluency throughout. They performed on songs like Bhajare Manasa Sri Raghuveeram, Yamanelli Kanenendu Kelabeke and a Thillana in Raga Gambheera Nata composed by Vid. Oothukkadu Venkata Subbaiar. The duo showed great level of synchronisation throughout the performance with impressive expression. 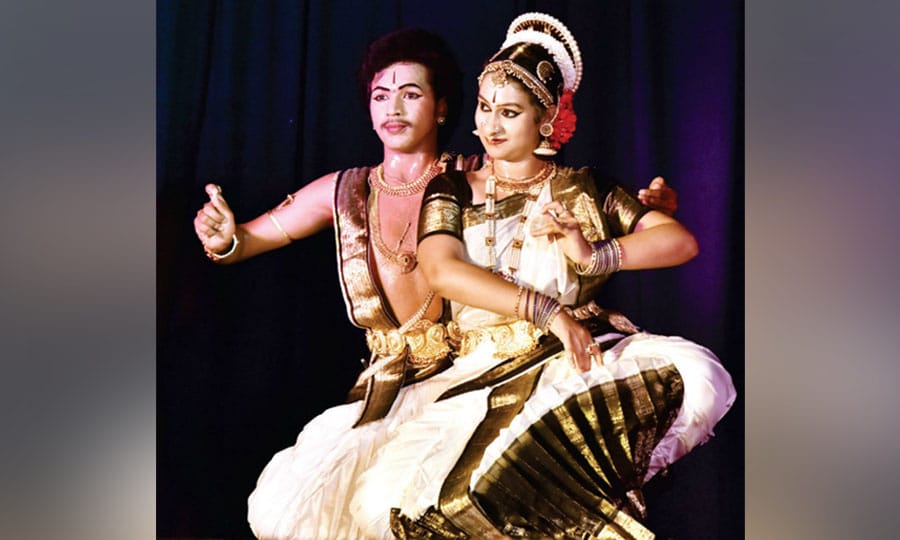 They played the characters of Rama, Krishna and Devi with ease. It was a typical and traditional Kuchipudi performance with an intelligent use of stage. Altogether the performance was a visual treat. Accompanying the duo were Vid. Bharadwaj on violin, Vid. Veimuri Vasudev Murthy on mridanga.