A classic-car show attracts vintage beauties worth tens of millions of rupees and the owners who are worth aconsiderably more. India’s golden age of the automobile was when the country’s obscenely rich Maharajas (of which there were once more than 600) ordered cars by the dozen from eager manufacturers who happily pandered to their every extraordinary whim. After democracy was established, the role of the Maharajas was taken over by vintage car lovers who go to any extent to own an old car or to repair a broken down yesteryear machine. One such person of passion is in our city and in a candid chat, as featured in this Weekend Star Supplement, the avid collector opens up about his love for classic cars and how he became so passionate about restoring antique models.

Drive back in time with Garage Goldies

These are Garage Antiques. This vintage car collection owned by M. Gopinath Shenoy is a testament to the grace of machines from bygone eras and a roadmap of automotive evolution.

Vintage cars are classic examples of art, craftsmanship and engineering. While they have every right to be in museums, they are best enjoyed (while driving) on the road with eyes of fellow commuters popping out to admire the beauty and ears tuned to hear the sound of these time-less machines. It is like driving an old-world soul through a modern landscape. Vintage cars always have a huge fan following and the people who grew up on them are reaching their levels of buying power, timed with their need for nostalgia. Tucked away from the busy streets of Mysuru, there is a beautiful property and a plush European-style bungalow owned by Gopinath Shenoy near Kurubarahalli Circle on the Lalitha Mahal Palace Road. This bungalow was constructed by Sir Mirza Ismail and the property was later purchased by Gopinath.

Well-known for his love for vintage cars, Gopinath has a fleet of about 32 such cars in his collection. His collection includes vehicles that once belonged to India’s maharajas, well known for splurging on luxurious rides. 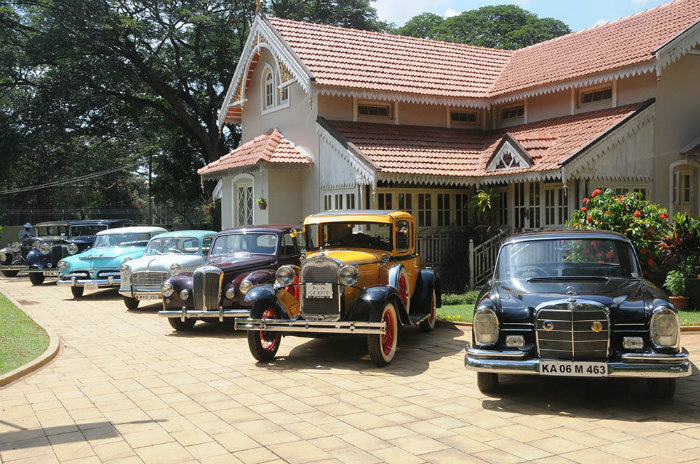 Some of his collections include Dodge, 1930 Ford, 1930 Cadillac, and Rolls Royce of the Maharaja of Ramgarh in Bihar, Daimler Saloon, once owned by legendary Bollywood actor Ashok Kumar.

Speaking about how vintage cars caught his attention and how he began to collect some of them, Gopinath Shenoy said that about 15 years ago, an auto expo was held in Bengaluru where a few vintage cars were displayed which fascinated him.

“I really wanted to own some of them and began my search and research. Luckily, I found a few owners who wanted to sell their vintage beauties and I straight-away bought them,” Gopinath said.

All his cars teach us a thing or two about technology. It’s not just the history of these vehicles that attracted Gopinath but their looks, technology, feel and of course on-road attraction. “All these came after the vintage bug bit me. From then on, I started collecting as many classic cars as I could — I was on a buying spree and it took me years to completely set up this collection,” he says and adds that he too could share stories about vintage cars and relive the best of memories.

“These vintage cars have brought me lots of fun, enjoyment and unforgettable moments,” he says, before adding “There are some challenges to me as well.  Storage is one among them. But unfazed by challenges, I’m still looking for more valuable and beautiful classic cars.”

Cars are like people, the care and feeding of cars and people is continuous and expensive. But the car has the advantage of being a machine. “A person is like a machine, only cleverer and much more complicated, totally amazing yet somewhat imperfect, and sometimes much harder or even impossible to fix. Needless to say, we humans come with no warranty, and there’s no money back if we go wrong. While we humans have no value as we get old, the value of these cars double, treble or go way beyond the price multiple times with time,” he said. 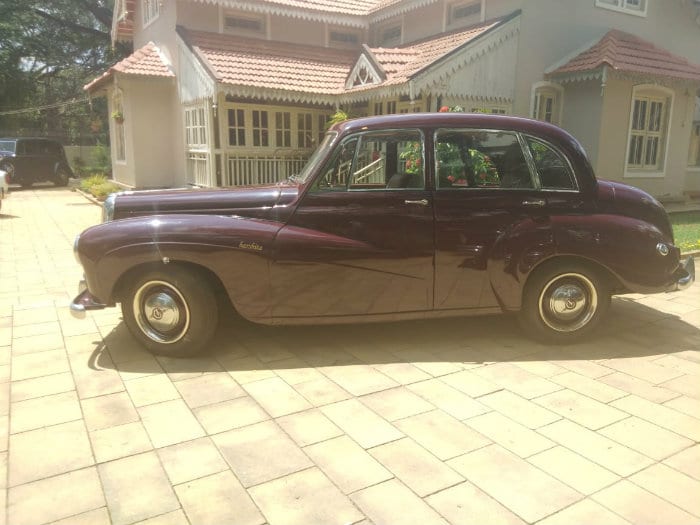 Speaking about repairs when these beauties breakdown, Gopinath again compares human beings with cars. “Both people and cars get old. And old cars can be like old people. They break down, and as time goes on they break down more and more. As very few people know about the mechanism of these vintage cars in city, I have sent a few cars to Mumbai and Kolkata for restoration and repairs,” he reveals.

If one is passionate about something, then he/ she is more than willing to take risks and that’s what Gopinath also did. He started researching about how to preserve and restore vintage cars. “You should understand the art and craft of vehicle restoration. Thanks to the internet and like-minded vintage car enthusiasts, I have gained knowledge about the cars. 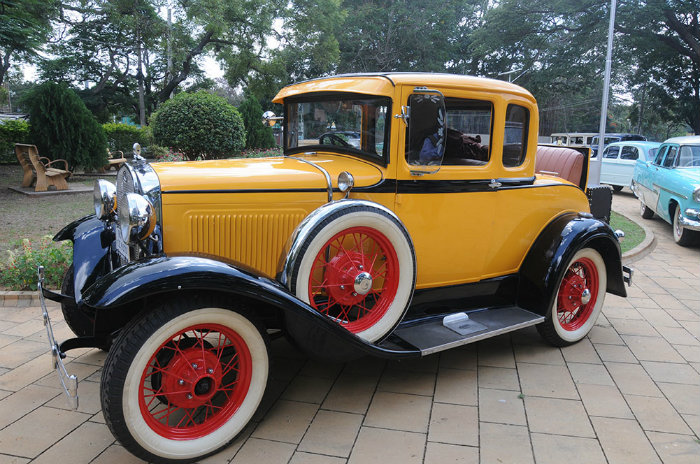 We all depend on each other because old cars need regular maintenance,” explains Gopinath.

Restoration of an out-of-production car is a difficult task and most of the time, sourcing materials is like a treasure hunt. “It is a definitely a time-consuming process and you need to have bucket-loads of patience. It is a challenge to repair and upkeep them, considering most of the parts are out of production,” he said.

“Every car is precious to me and driving them is a great stress-buster. I have plans to hold an exhibition of all my cars once the cars come back from fully repaired and restored,” he sums up. Rolls Royce Phantom 2 – 1935 model. This car was earlier owned by the Maharaja of Ramgarh and now it is with Gopinath Shenoy.

Savithri Shenoy, wife of Gopinath Shenoy said that it is her husband’s hobby of collecting vintage cars and she fully supported him. When the cars roll out inside their house compound, it will be the results of years of painstaking effort, which Savithri has seen first-hand.

Mysureans, who had a chance to see over 50 vintage beauties at the Dasara Vintage Rally that was organised on Oct. 1, will soon get a chance to see them at leisure and admire them as Gopinath Shenoy is planning to establish a “Collector’s Museum” or an exhibition of his car collection. 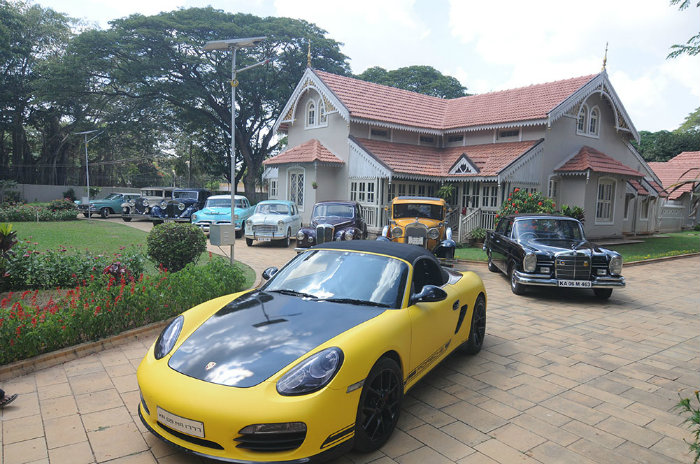 OLD WORLD CHARM AND NEW WORLD ATTRACTION: A Porsche sports car (not vintage car but a modern mean-machine) parked along with Vintage cars.

Sandheep Nayak, a relative, entrepreneur and a partner of Gopinath Shenoy, told SOM that after purchasing the vintage cars from Mumbai, Delhi, Kolkata and other places, Gopinath had kept them idle which resulted in some of the cars coming under repair. “As spare parts were not easily available, I began to search for the spares by collecting information from previous owners and friends,” he added.

“I took the initiative to get these vintage beauties restored and sent 10 cars to Kolkata and 10 to Mumbai for repairs,” he said. 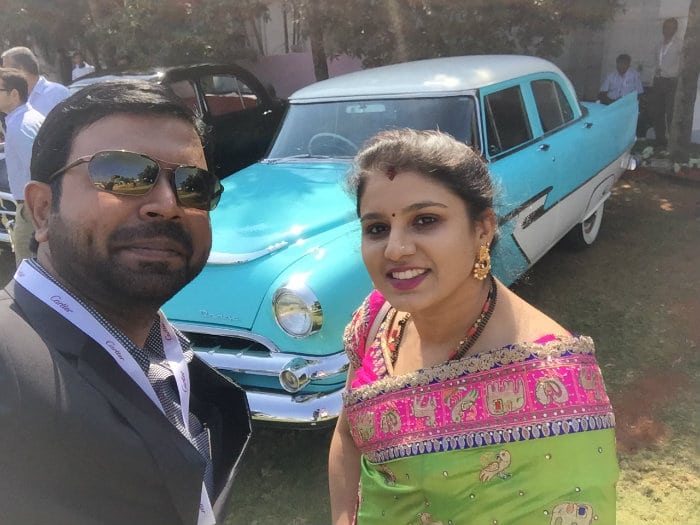 Sandheep Nayak and Yoggitaa Sandheep Nayak pose for a photo at the ‘Cartier Concours D’Elegance’ in February 2017, at Taj Falaknuma Palace in Hyderabad.

“One of the most prestigious events in the world for vintage cars is ‘Cartier’ that makes luxury cars and pens. It is called ‘Cartier Concours D’Elegance’. In 2017, four of our cars were taken for the Cartier exhibition in Hyderabad. “You cannot just take your cars there as it is by-invitation-only event. Over 50 to 55 cars had come from India and we had four there. All our cars were featured in the Auto Car magazine,” Sandeep explained.

“In India, there is not much love, awareness and funding available to restore these cars. “There are a lot more people and clubs interested in classic cars abroad, but the situation here is improving. It is important for this generation to realise the need to preserve these cars, because if we don’t, that need will go away,” he says.

Believe it or not type 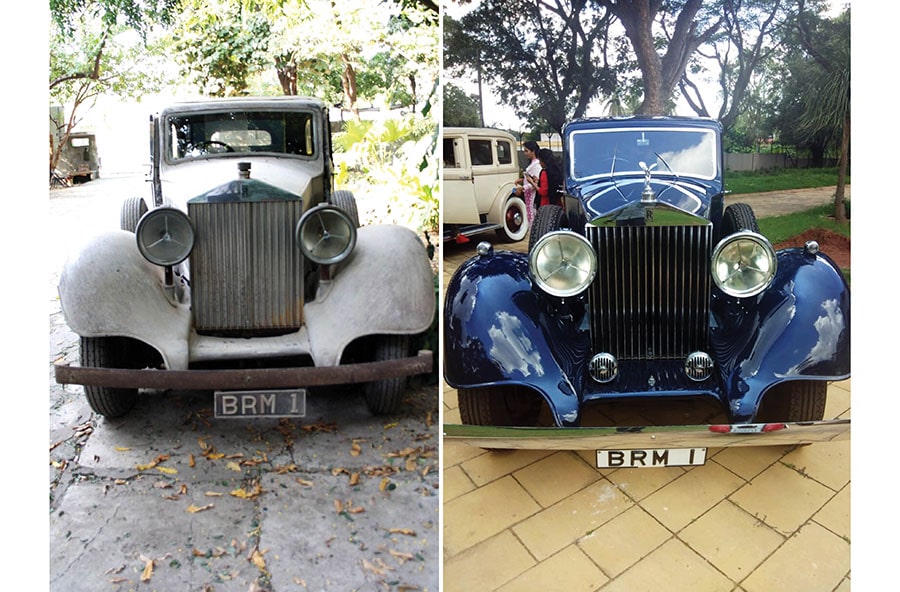 These before and after photos of Rolls Royce Phantom 2 – 1935 model shows what goes into repairing and restoring a junked car. It takes years of painstaking effort and a lot of patience to restore a vintage beauty.