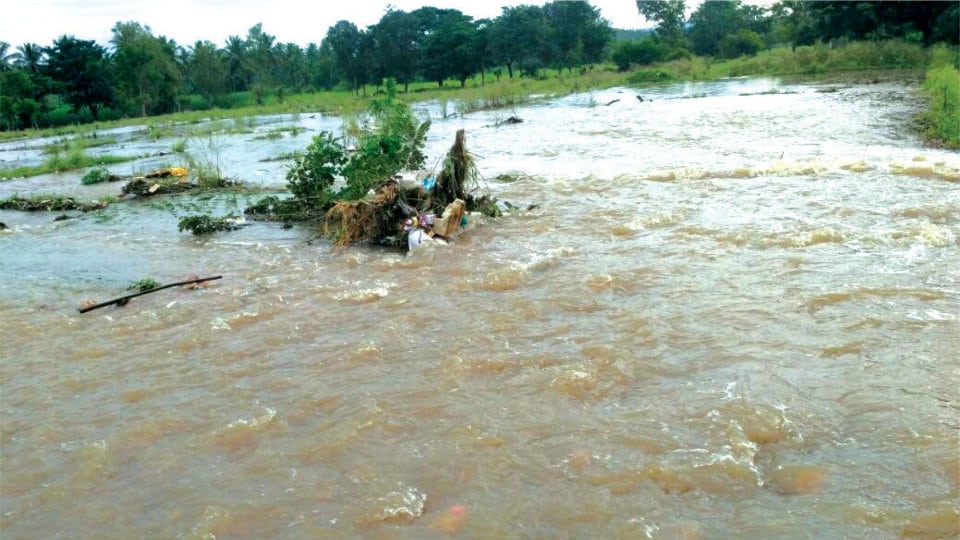 Over 20 acres of agricultural land were damaged after Hullahalli Canal or Ramapura Canal at Shankarapura Layout in Nanjangud Taluk breached on the night of Sept. 5. Heavy rain that lashed the region caused the breach of the Canal that resulted in rainwater entering the fields and causing extensive damage to the crops. The breach was observed at the 23rd kilometre.

The Canal was constructed at Hullahalli to supply Kapila River water to agriculture fields in over 6,500 acres of land. According to villagers, heavy rains and substandard work on the Canal have caused the breach which was modernised recently with a cost of Rs. 104 crore.

Irrigation Department Officers who rushed to the spot promised the farmers that they will initiate measures to plug the breach. Villagers, however, say that it would take at least six months to rectify the problem. Villagers have blamed the authorities and sand mafia — which had dug the ground to extract sand — for the breach and crop loss. The collapse of the Canal will affect irrigation in 4,500 acres of land. Kabini Executive Engineer Mariswamy visited the spot near Shankarapura and assured that authorities will inspect and take a call on taking up the work.

Standing crops in more than 50 acres of land in Melapura village in Mandya district have been washed away after Virija Canal breached due to heavy rain on Tuesday night. The Canal, on the Mysuru-Bengaluru National Highway, developed cracks due to heavy rain and substandard works. It breached at 35kms and gushing flood destroyed standing crops.

Paddy, tomato, sugarcane and other crops have been washed away. Cauvery Neeravari Nigam (CNN) Limited Assistant Executive Engineer Thammegowda visited the spot and carried out an inspection. Villagers took him to task alleging that even though the Canal development works were completed last year, the Canal has developed cracks this year due to poor-quality works.

Thammegowda explained that the officials have stopped releasing water to Canals from August 30. The heavy inflow to the Canal was due to rains that battered Mysuru on Tuesday night, he said. Huge silt deposits at Ullani, where water is allowed to seep into the Cauvery River, is also said to be the reason for the water to enter the fields.

Farmers said that they had been requesting the officials concerned to de-silt the Canals to prevent such incidents. “Our request to upgrade the Canal from 550 cusecs capacity to 800 cusecs has not been considered,” they complained.