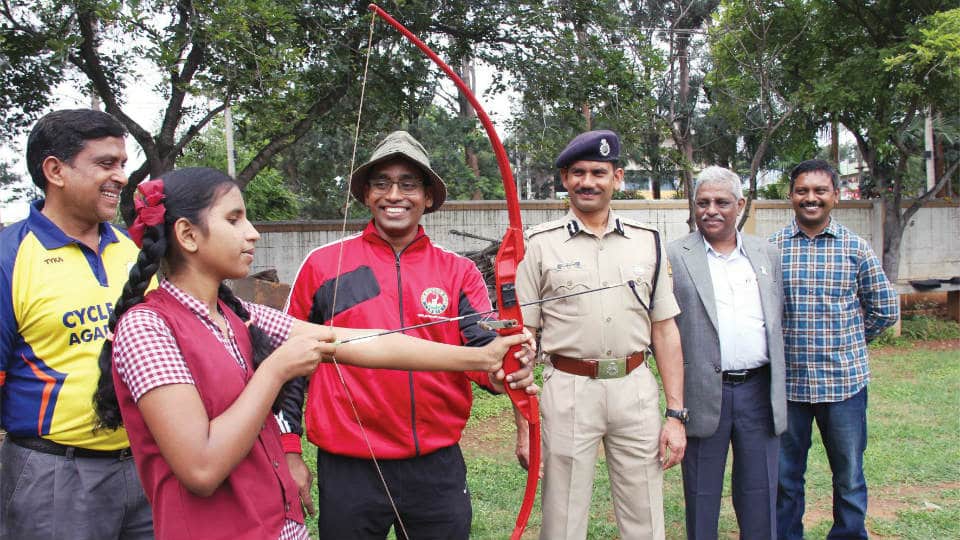 Mysuru: Rotary Mysore Midtown in association with Tiger Adventure Foundation conducted an archery camp for the visually challenged girls on Sunday at Ranga Rao Memorial School for the Disabled on KRS Road here in city.

Vipul Kumar, Inspector General of Police (IGP), Southern Range and Director of Karnataka Police Academy, inaugurated the programme by shooting the first arrow. Speaking on the occasion, he said this kind of activities builds confidence in them.

The event was to expose the visually impaired students to archery, said Rtn. Narendra Babu, President of Rotary Midtown.

Initially, the students were made to touch the bow, arrow equipment, target, essence of circles in the target and coding of marks. Later,  they measured the distance from the start line to the target and bell rings; they aimed on the sound and  shot the arrow to the target with navigation being done by trainers.

This programme is the brainchild of DSD Solanki, who has brought this sport to city since the year 2005, said A. Anil Kumar, Chairman of the Foundation.

About 45 girls from Ranga Rao Memorial School for the visually impaired girls participated in the programme. The participants were trained by Panjak Mallick, G.Lohit and Gowtham Devanoor. Rtn. Naveen Chandra of Rotary Midtown and Rtn. R. Guru of Ranga Rao and Sons were present.