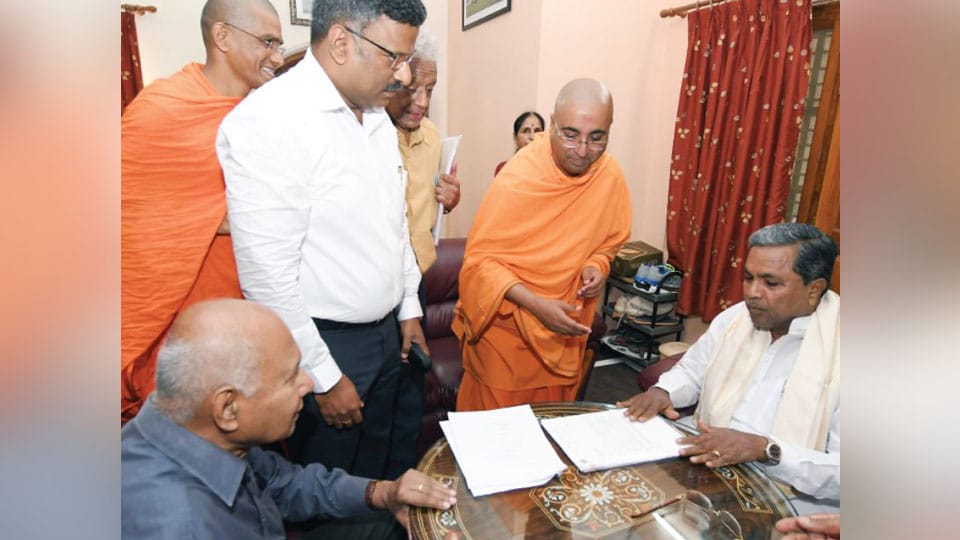 First Swami Atmajnanadaji, accompanied by Litterateur Prof C.P. Krishnakumar, N.S. Chakravarthi, Advisor to the Ashrama and Advocate Arunkumar met the CM and highlighted the issues about the Viveka Memorial.

Swamiji said, “When you visited our Ashrama sometime back we had brought to your notice the kind of social work we are involved in. You must also be aware that the Karnataka High Court recently cleared all hurdles by quashing the order issued by the Commissioner of Public Instruction that had asked the education department to continue the functioning of the New Type Model School (NTMS) in its existing premises.”

He went on to add that Viveka Smaraka will be dedicated to the people of Mysuru. Besides, the Ashrama has never been anti-Kannada as it has even admitted students under RTE, besides bringing out publications in Kannada.

Siddharamaiah who listened patiently to the Swamiji assured to look into the matter seriously and take a favourable decision.

Advocate Arunkumar speaking to Star of Mysore, said, “We explained to the CM about the ground reality and we have never been anti-Kannada. The locals also have extended their support to the historic Viveka Memorial.  We hope for a healthy and amicable settlement.”

The team led by Rajashekar Koti that included P. Mallesh and others later met the CM. Mallesh told SOM, “The CM is a Kannadiga who understands the water, land, language and culture of Kannadigas. He will not let us down and help us retain the NTMS in its present premises as it is Kannada school for girls.” 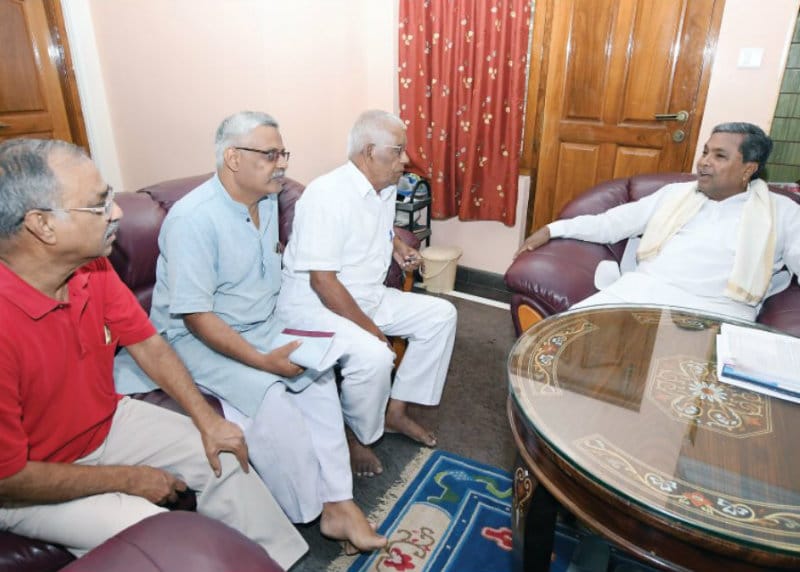 Members opposing the handing over of NTMS land to R.K. Ashrama. Rajashekar Koti, P. Mallesh and another talking to the CM.

There were a host of others waiting to call on the CM and it resembled a mini Janata Darshan.

The CM told Shivashankar, “I am aware of the dengue scare in the City. You must ensure that all steps are taken to prevent its spread. I do not want to hear about any deaths. If anything untoward happens, I will not spare anyone.”

First addressing about the farmers loan waiver, the CM said that he had passed an order regarding the loan waiver up to Rs. 50,000 to the farmers who have taken loan till June 20, 2017.

Asked about the Cabinet expansion, he told the media that it was a decision that was left to him. “Where and when I will take, I will decide.”

The CM said that the Government will have no option but to resort to cloud seeding if monsoon failed. He would wait for another two or three days and if it does not rain, then they would use cloud seeding.