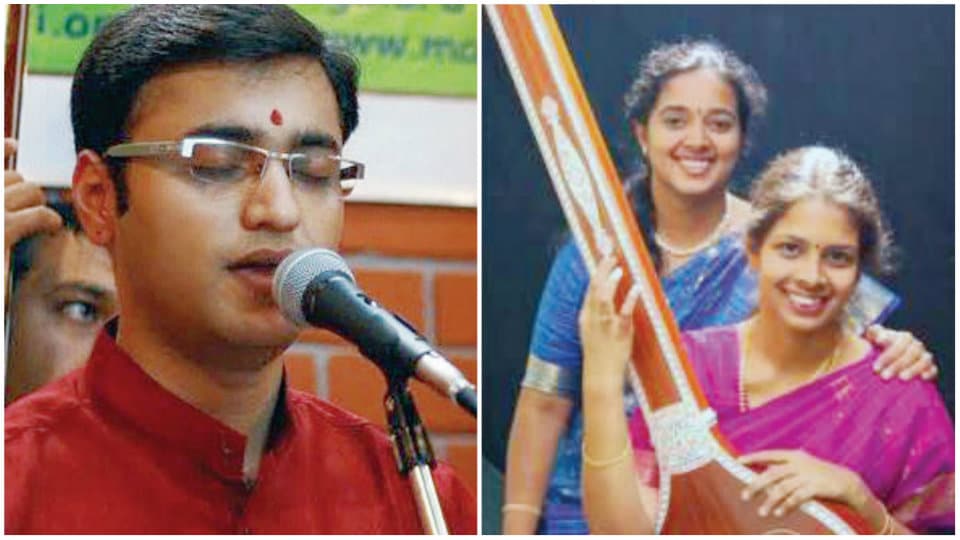 Mysuru: Sri Nadabrahma Sangita Sabha is presenting two Carnatic Vocal concerts on Apr.22 and 23 at the Sabha premises on JLB Road at 6 pm on both the days.

On Apr. 22:  Vid. S.R. Vinay will present a Vocal concert accompanied on Violin by Vid. C.N. Tyagaraju, on Mridanga by Vid. H.L. Shivashankara Swamy and on Morching by Vid. V.S.Ramesh. It is an endowment programme  in memory of M.H.Raja Rao.

Vinay, a bachelor in Business Management, is a keen student of Music. He started learning the basics under Vidushi Seetha Lakshmi and then under Vidushi Lalitha Chandramouli, Vidwan R. K. Padmanabha. Currently, he is undergoing advanced training under Malladi Suribabu, Malladi Ramprasad and Malladi Ravi Kumar.

On Apr.  23: Kanchana Sisters, known for their melody and Avadhana Pallavi will give a Vocal Duet accompanied by R. Achyut Rao on Violin, G.S.Ramanujan on Mridanga and Bhargava Halambi on Khanjira.

Kanchana Sisters  Sriranjani and  Shruthiranjani are one of the most sought after vocalists in the music industry today. At a very tender age of 3 years, their father, Karnataka Kalashri Kanchana V. Subbarathnam, the renowned violinist, initiated them into music. They have been trained in Carnatic Classical vocal and violin for over 20 years under the tutelage of their father. The sisters specialise in the rendition of the “Avadhana Pallavi”, which they learnt from their maternal uncle R.S. Nandakumar.

Being LLB degree holders, both the sisters hold a ‘Vidwath’ degree in Carnatic Classical Vocal and Violin, conducted by the Government of Karnataka and are “B High” graded artistes in AIR.  Their maternal grandfather is Mahamahopadhyaya Ra.  Satyanarayana.