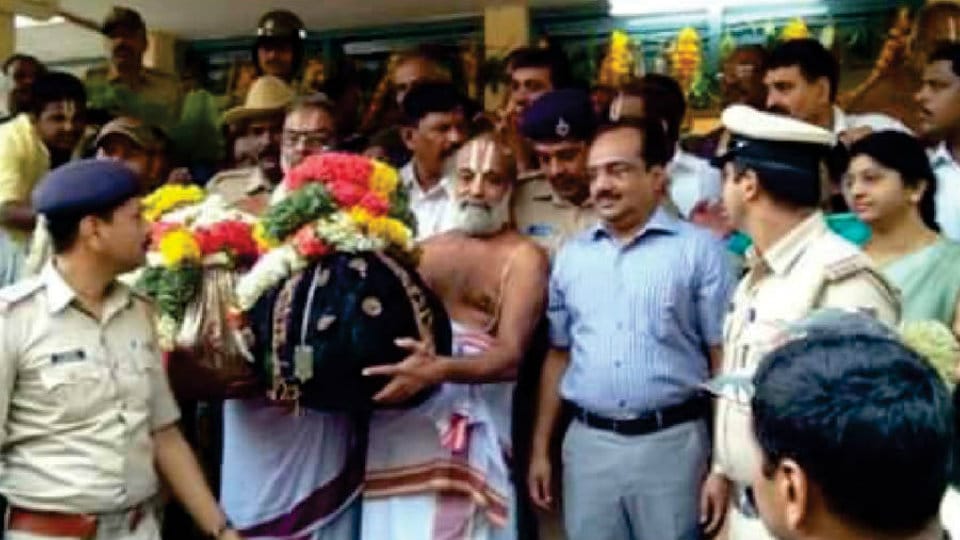 Vyramudi Utsava at Melukote this evening

With the famous Vyramudi Utsava at Melukote scheduled tonight, the Mandya District Administration handed over the diamond and precious stone- studded crown and other jewelleries of Lord Cheluvanarayana Swamy to the Temple Chief Priest Karagam Iyengar this morning.

The officials, led by Deputy Commissioner S. Ziaullah, took stock of the jewelleries at the district treasury in the presence of SP Sudheer Kumar Reddy, ADC B.R. Poornima, AC Arul Kumar and other officials before handing them over to the temple authorities.

Later, the jewels were taken under tight Police security to the nearby Lord Lakshmi Janardhan temple in a special van provided by Parakala Mutt where special pujas were offered by political leaders of various parties.

After the rituals at the temple were completed, the priests and officials began their journey towards Melukote passing through Pandavapura, Thonnur, Bellale and Jakkanahalli. The vehicle gave few stops at places were villagers gathered in large numbers to offer puja to the Lord’s crown.

On reaching Melukote, the crown will be kept in high security room before being decorated upon the idol of Lord Cheluvanarayana Swamy during the Vyramudi festival which is expected to commence at around 8 pm.

Meanwhile, the KSRTC has introduced special buses from Mandya and Mysuru for the devotees to visit the holy place.

The Mandya District Administration has arranged for drinking water, mobile toilets and other necessary facilities atop the hill.

The District Police have deployed adequate personnel and has also installed CCTV cameras at various points to keep a close watch on the proceedings during the festival. Thousands of devotees are expected to visit Melukote to witness the fest.