Home » News » When CM gestured to his wife from stage… 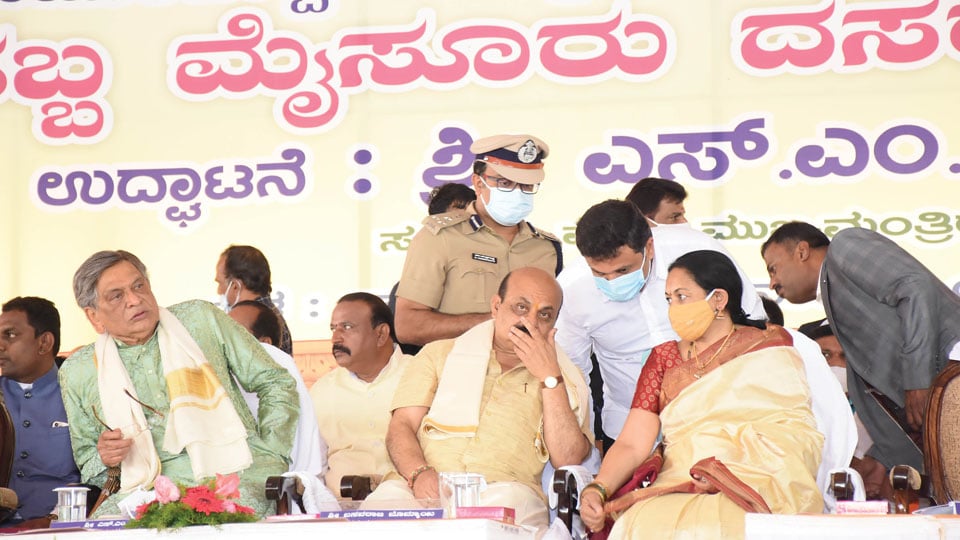 When CM gestured to his wife from stage…

SP inadvertently wears shoes inside Chamundi Temple; runs back to remove it

Mysore/Mysuru: As soon as Dasara State guest former CM S.M. Krishna and Chief Minister Basavaraj Bommai walked on to the dais to do the honours of inauguration accompanied by a large number of Ministers and elected representatives, CM’s wife Chennamma too followed them.

Looking confused about the protocol to be followed on the stage, she glanced at her husband who gestured to her to be seated below the stage. She obeyed and sat in the front row.

Seeing this, Mysuru Deputy Commissioner Dr. Bagadi Gautham and other officials went to the CM’s wife and urged her to get on to the dais. Even as Chennamma hesitated, they told her that it would not be a violation of protocol and she agreed to climb the stage.

Though the number of people was limited to 400, the Chamundi Hill saw a crowd of more than 500 people and as soon as the CM and guests arrived, there was a flurry of activities with officials running behind their political bosses.

In the confusion and eager to get inside the Chamundeshwari Temple, Mysuru SP R. Chethan missed removing his Police shoes while entering the Temple. He further went a few steps from the entrance following the VVIPs but was alerted by one of his subordinate staff. Taken aback by this sudden development, the SP realised his mistake and ran back to the entrance to remove the shoes. While his subordinates told him that it was an inadvertent mistake, the SP wore a regretful face and rushed back to the sanctum sanctorum.