Home » News » Low-key Dasara off to a traditional start 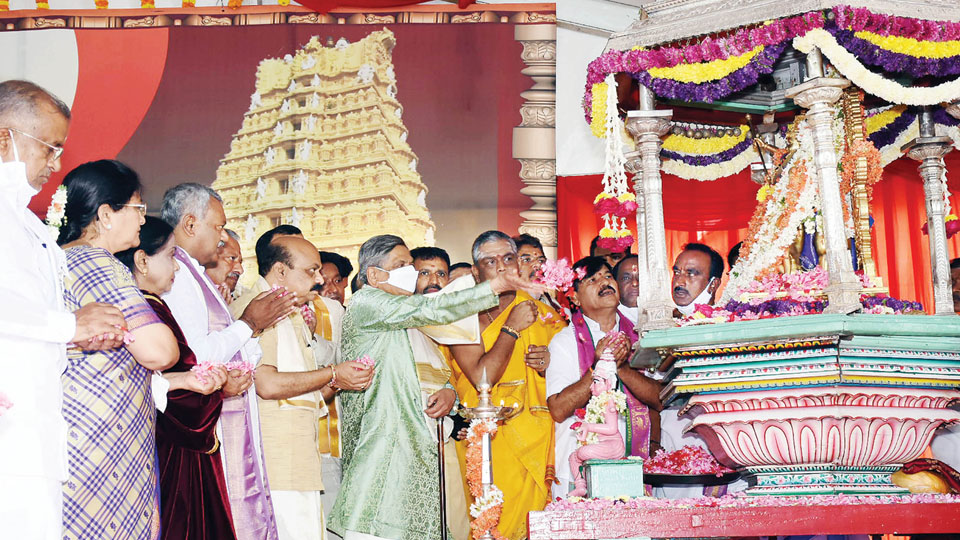 Low-key Dasara off to a traditional start

Mysore/Mysuru: Former Chief Minister Somanahalli Mallaiah Krishna (S.M. Krishna) inaugurated the 412th Dasara (Nada Habba) atop the Chamundi Hill in the auspicious Tula Lagna between 8.15 am and 8.45 am today. The inauguration signalled the start of Sharannavarathri which will conclude with Vijayadashami on Oct. 15.

Public entry to Chamundi Hill since early this morning was banned owing to crowd-control measures and the presence of VVIPs. Public were allowed only after dignitaries descended the Hill. Though touted as a low-key Dasara, there were more than 40 VIPs on the stage including Ministers, elected representatives and officials. Atop the Hill there were over 500 people, a majority of them being followers of politicians.  The only item missing this year was cultural troupes and folk artistes. Usually, when CM and other VIPs arrive,  folk troupes would perform and welcome the guests.

The CM was accompanied by his wife Chennamma. Prema Krishna, wife of S.M. Krishna was not present during inauguration. Krishna came to Mysuru last afternoon and stayed at Hotel Radisson Blu Plaza. For today’s inauguration, the former Chief Minister was dressed in a light-green kurta, a white dhoti and shalya. The 89-year-old leader had a walking stick but was firm in his steps.

It is a tradition for the Dasara invitees to bring their spouses to the festival inauguration. Krishna preferred to give this a go-by. Dr. H.V. Santhrupth, General Surgeon and Head of Gopala Gowda Shanthaveri Memorial Hospital, whose mother is a cousin of Prema Krishna, accompanied Krishna.

Beginning his speech by reciting a Sanskrit Shloka propitiating Goddess Chamundeshwari, the former CM Krishna said that it was his good fortune to be inaugurating Dasara and only the Goddess can rid the Nation of COVID.

Remembering his association with Mysuru during his school days, he said “I have grown up seeing Dasara during the time of Sir M. Visvesvaraya and Sir Mirza Ismail.”

“I have a close bond with Mysuru, as I completed my studies in city. I used to walk up to Chamundi Hill and pray to the Goddess,” he recalled, citing Dasara music concerts by eminent musicians and the famous wrestling bouts during the festivities.

Krishna remembered the contribution of Wadiyars and Dewans of Mysuru who made the region prosperous and also brought to fore the special relationship of people with the rulers.

In his address, CM Basavaraj Bommai praised Krishna for spearheading development in Karnataka. “Because of the foundations laid by Krishna we have achieved a revolution in Information Technology and Biotechnology. At a time when computers were new to India, Krishna, through his vision and farsightedness, laid a red carpet to IT companies to make their homes in Bengaluru. The result was astonishing as Bengaluru developed in leaps and bounds and the whole world knew about it,” Bommai said.

Mysuru District Minister S.T. Somashekar outlined various programmes being held in Mysuru till Vijayadashami and said that the programmes have been designed in such a way that the tradition is followed and at the same time COVID is prevented.

MP Pratap Simha said Krishna was the right choice of dignitary to inaugurate the Dasara festivities as his contributions to Karnataka and its development are immense. “Krishna is a leader who cuts across all political affiliations and has earned immense respect among masses with his scholarly outlook and at the same time a vision to make the lives of the common man better,” he said and added that despite Krishna facing multiple challenges as CM, he ensured that the State became prosperous and the State coffers are filled by streamlining revenue flow.

In his presidential remarks, MLA G.T. Devegowda also praised Krishna and his contribution to agriculture, industry, IT and BT that laid a firm foundation to the development of Karnataka.