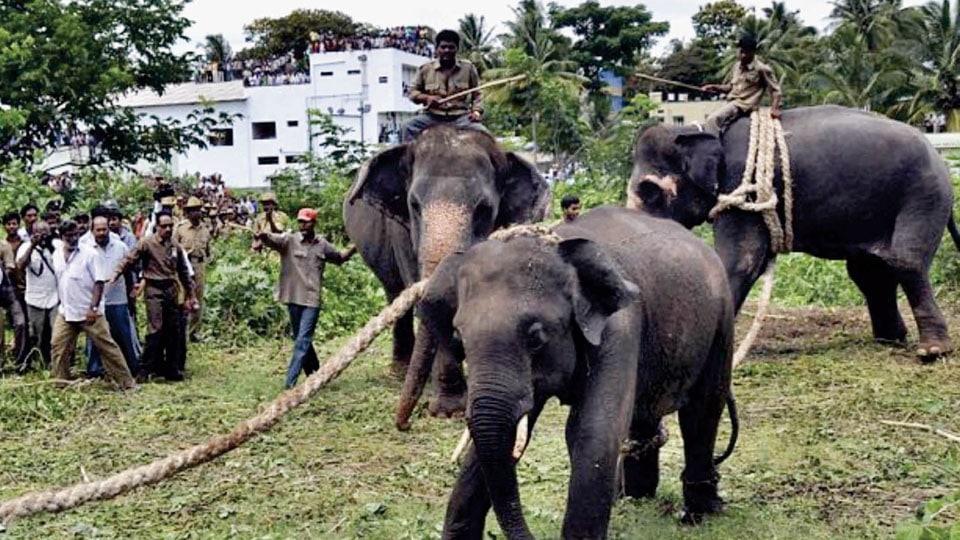 Mysore/Mysuru: Early in the morning on June 8, 2011, two elephants charged through the streets of Mysuru and damaged cars. Several people were injured in the panic and one man, a security guard at an ATM, was killed by an elephant and the jumbo then gored a cow to death. The elephants had got separated from a herd that had strayed out of T. Narasipur forests.

It took more than five hours for experts to be able to get close enough to one of the elephants — aged between 8 and 10 — to tranquilise him. The trouble began on June 7, 2011, when four elephants were separated from their herd after villagers chased them away from their fields nearby.

Two elephants retreated towards the forests in the area, but the other two wandered into the city and were separated from each other near Bamboo Bazaar. The rampage began at around 5.15 am on June 8 near Bamboo Bazaar. Before entering the city, the elephants had travelled nearly 35 kilometres.

While one elephant was eventually trapped at a farm near Naidu Nagar; the other, a tusk-less makhna elephant rushed through the city and created a mess and panic. People ran helter-skelter and the elephant was on a free run for over seven hours. The tusker first attacked a cow tethered to a post on New Sayyaji Rao Road and fatally injured another in an adjacent neighbourhood. It proceeded to Saraswathipuram Dhobi Ghat.

Seeing the destruction, expert shooters, armed with tranquilliser guns attempted to dart the elephant twice at Oval Grounds and near Dhobi Ghat but were unsuccessful. The elephant then vented its anger at a KSRTC bus along the main road and on the JSS Women’s College.

The crowds began gathering wherever the tusker went and after spending some time near a bush in Dhobi Ghat, the tusker again entered the roads trashed some vehicles. At Shivarampet, Renukaswamy (55), a security guard at a bank ATM, was gored to death. The attack was filmed live by journalists and amateurs on mobile phones and cameras.

The hapless man ran into one of the by-lanes of this crowded locality only to be outrun by the animal. Four persons, including two women, were injured in the attack. After much effort, the elephant was shackled with jute ropes brought from the Mysore Palace. Four Dasara elephants — Arjuna, Abhimanyu, Gajendra and Srirama — entered the scene and finally the tusker was brought under control somewhere near the Dhobi Ghat.

The family of the security guard was paid a compensation of Rs. 5 lakh. By the time the entire operation was over, it was evening. Both the  elephants were released to the forests back in T. Narasipur. And now it is a day to remember.