Home » Feature Articles » Who will wear the Crown ? 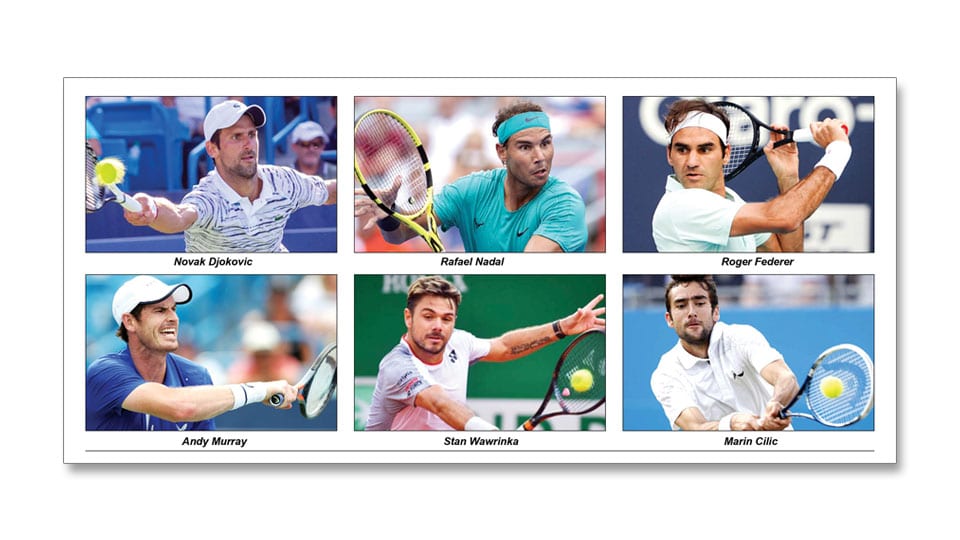 Who will wear the Crown ?

Will it be one of the Old Guards or a Next-Gen Player?

The last tennis major of the decade will be played in New York from August 26, 2019 onwards for two weeks. While the reigning champion Novak Djokovic (32 years), Rafael Nadal (33 years) and Roger Federer (38 years) are the three top seeds and will be hoping to add to their major title tally, there are at least six youngsters who are knocking at the title door. The three oldies have won the US Open title multiple times but none of the young guns have won even one major title!

Going back to the record books, of the 39 Grand Slam events played during the present decade (2010-2019), 32 titles have been won by the three geriatrics (Djokovic 15, Nadal 12 and Federer 5). The remaining seven are shared between Andy Murray (3), Stan Wawrinka (3) and Marin Cilic (1), also of 30+ in age. Looking only at the US Open event, Federer has won it five times, and Nadal and Djokovic three times each.

The Grand Slam events started in 1877 with the first All England Club Championship now popularly known as Wimbledon. Since then only 149 players have won at least one Major title. Many tennis analysts are eagerly waiting for the past five years for the 150th player to emerge.

Let me try to analyse who that could be. I could list at least six potential winners. First in my list is Dominic Thiem (25 years) who is not now a next-gen player. He has been runners-up twice in Grand Slam events and won one Masters 1000 title. Next in my list is Alexander “Sascha” Zverev (22 years) who has one year-ending championship (next only to Grand Slam event in importance) plus three Masters 1000 titles. Yet his performance in Grand Slam events has been very disappointing. Since his best performance has been one quarter final appearance, many experts believe that he might not be a Major title winning material.

Third in my list is Daniil Medvedev (23 years) who has blossomed as a potential winner in 2019. His best Grand Slam performance is a fourth round appearance in this year’s Australian Open and has one Masters 1000 title which came just last week. He plays a clean steady all round game and would certainly give a run for the money to the bigwigs. If not this US Open, he is bound to bag a Major title in 2020. Fourth in my list is Stefanos Tsitsipas (21 years). Though, he reached semi-finals by defeating mighty Federer in this year’s Australian Open, according to many experts, he is still “Work in progress.”

My fifth choice is Karen Khachanov (23 years) and is a discovery of late 2018. His best Grand Slam performance has been to reach quarter finals in 2019 besides winning Paris Masters 1000 event last year by defeating Djokovic in the finals. So he definitely has the stuff to win a Grand Slam event. Sixth in my list is a toss-up between Nick Kyrgios (24 years), Borna Coric (22 years) and Felix Auger-Aliassime (19 years).

Kyrgios is very talented but extremely mercurial player and invariably ends up with abusive arguments with the chair umpire. Unless he can control his temper, he will not go far in Grand Slam events. Regarding the other two, both are also very talented but are still “Work in progress.”

Finally, two next-gen players like Medvedev and Khachanov, both 23 and both Russians, are moving up the ladder at a fast pace which is matched by the likes of Don Budge, Rod Laver, Jimmy Connors, Bjorn Borg, Boris Becker, John McEnroe, Mats Wilander, Pete Sampras and the present three champions who have all won their first Major title at late teens or early 20s, and won at least half a dozen such titles!

To know who would wear the last crown of this decade, we in India would have to wait till early morning of Monday, September 9, 2019. Would it be the same old geriatrics or a next-gen player, I would not hazard a guess.