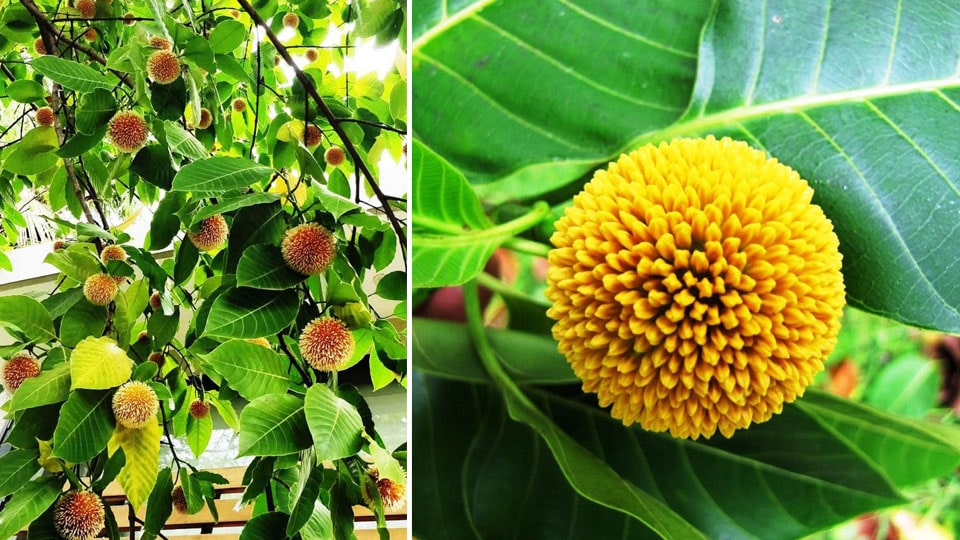 Many indigenous trees are designated as sacred trees as they are associated with mythology, religion and folklore. A few are symbolic of specific God(s). ‘Kadamba’ is one such tree associated with Lord Krishna. The flowers are offered in temples and used in tribal festivals. The tree is enlisted in ‘Nakshathra Vana’ representing ‘Satabhisha’ nakshatra roughly corresponding to Aquarii (a  binary star system).

It lends its name to the ‘Kadamba Dynasty’ with Banavasi as capital, the first ruling Kingdom of Karnataka.  It was considered a holy tree by the dynasty. The spring festival, ‘Kadambotsava’ is celebrated in honour of Kadamba kingdom by the Government of Karnataka at Banavasi every year.

Another interesting fact is that ‘Kadamba’ flower was the emblem of Athmallik State, an erstwhile princely state of India, now part of Odisha. The tree has immense medicinal values besides being a beautiful ornamental tree with scented golden ball like floral heads. A postal stamp has also been issued by the Department of Posts  to commemorate its importance. The scientific name is Neolamarckia cadamba of Rubiaceae family. The genus name is in honour of French naturalist Jean-Baptiste Lamarck. The common names are: Bur-flower tree, Laran (English); Kadamba, Kaduavalatige (Kannada); Kadam, Kadamb (Hindi); Kadambamu (Telugu); Kadambai, Vellaikadambu (Tamil); Attutek (Malayalam).

The tree, native to South and Southeast Asia, is widely distributed in different parts of India, Bangladesh, Nepal, Myanmar and Sri Lanka.

Kadam features in Indian mythology and is mentioned in Bhagavata Purana. In North India, it is associated with Lord Krishna while in the South Goddess Parvathi. It is believed that Sri Krishna performed many of his divine acts (leelas) in Vrindavan under the canopy of Kadamba trees. He used to play with his friends around these trees in Vrindavan, holding the unique globular flowers of the tree. Hence the tree is also known as Haripriya, God’s favourite. He is depicted as playing his flute under its canopy. Radha and Krishna were supposed to have conducted their love play (romance) in Kadambavana. The episode representing one of the naughtiest acts of Lord Krishna: the stolen clothes of Gopis by Krishna were hidden on branches of a tree related to this tree!

According to another belief, Goddess Durga Devi, an avatar of Devi Parvathi and the radiant beauty, loved to live amidst Kadamba trees. Hence, the name Kadamba-vana-vasini or Kadamba-vana-nilaye, whose presence is sensed if the koel (Cukkoo) sings in the Kadamb-van. In the Southern Tamil Nadu, Kadamba tree is considered the ‘sthalavruksham’ (Tree of the place) in Madurai and a withered relic of the tree is preserved at Meenakshi Temple. The tree is also associated with a local deity called Kadambariyamman and the place was once a Kadambavanam (Kadamba forest).

During Sangam period, Lord Murugan of Tirupparankundram Hill Temple (a centre of nature worship) near  Madurai is believed to be in the avatar of a spear under a Kadamba tree.

Many festivities are associated with the tree and ‘Karam-Kadamba’ also known as ‘Posatt’ or the ‘Koral parba’ is a popular harvest festival, celebrated on the eleventh lunar day of Bhadra. A twig of the tree is worshipped in the courtyard of the house. Later in the day, young ears of grain are distributed among friends and relatives — a custom adopted by Tulu people.

In West Bengal and Odisha, agricultural communities celebrate Kadam festival by planting Kadam saplings  ceremoniously during the month of Bhadra.

In Theravada Buddhism, the Kadam tree was where Sumedha Buddha achieved enlightenment.

Kadamba trees are most suitable for avenues and parks besides reforestation programmes  for timber and paper. The fruit and inflorescences are reportedly edible. The flowers are used in a sandalwood based perfume ‘attar.’ The fresh leaves are fed to cattle. It sheds large amounts of leaf litter which on decomposition improves physical and chemical properties of soil (organic carbon, plant nutrients and ion exchange capacity). A yellow dye is also obtained from the root bark. According to one research report, leaf extract is useful in the production of silver nano particles for surface-enhanced Raman spectroscopy.

The mature fruits are collected and allowed to rot for 3 – 4 days. The pulp is washed off by hands in a bucket of water. Seeds settled at the bottom are collected, dried well and sown in galvanised or wooden trays filled with fine river sand and soil treated with fungicide (better use sterilised sand). They are sown @ 0.2 gm of seeds / m2 of bed (around 5000 nos) during February. Water carefully. They germinate in 3 weeks time (60 to 90% germination) and baby plants transplanted to poly bags when they are 2-3 inches. Seedlings should be transplanted with their balls of earth intact to ensure successful establishment. After 5-6  months, saplings of 1 ft height are transferred to designated pits. It grows fast and flowering usually begins when the tree is 4-5 years old.