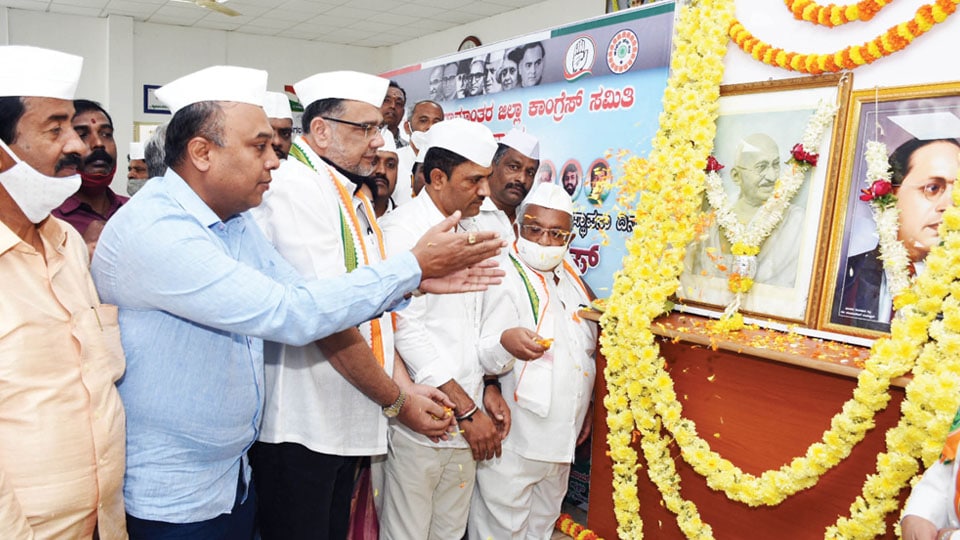 Mysore/Mysuru: AICC Spokesperson Brijesh Kalappa wanted to know why Rashtriya Swayamsevak Sangh (RSS), which claims itself as patriots, did not take part in the country’s freedom struggle. He was speaking at the 136th Foundation Day of Indian National Congress (INC) which was celebrated as ‘Samarpan Diwas’ at the Congress Bhavan here on Monday.

Kalappa said of late, RSS leaders and activists say they were real children of Bharat. In fact, the RSS was founded in 1925 but none of its leaders or workers took part in freedom struggle. On the other hand, the Congress Party, which has a history of 136 years, took a lead in freedom struggle. A number of leaders sacrificed their lives for the cause of nation. People wanted to know why the RSS did not participate in freedom struggle, he added.

He said if at all unity existed in the country after independence era, it was because of ruling by Congress. The Bharatiya Janata Party (BJP) has no history. The business of RSS leaders was to woo Congress leaders of their choice, he said adding that they installed the statue of Sardar Patel just for political gain. It was Patel who had banned the RSS in 1948, he noted.

An advocate in the Supreme Court, Kalappa said today, the Congress Party might have lost its image but it would emerge as a single largest party in the next Lok Sabha polls and come to power in the Centre. Likewise, the party would come back to power in Karnataka in 2023, he said.

Earlier, inaugurating the function, MLA Tanveer Sait said the country’s political system has changed after the BJP came to power and that this was a dangerous development in democracy. Former MLAs Vasu and M.K.Somashekar, MLA Anil Chikkamadu, Deputy Mayor  Sridhar, District Congress President Dr. B.J.Vijaykumar, City Congress President R.Murthy and others were present.