Home » News » It will be a Dasara to remember this year It will be a Dasara to remember this year

Mysuru: A host of entertainment activities will be the main attractions in this year’s Dasara and all the events starting from ‘Gajapayana’ will be celebrated in a grand way. In all possibilities, Dasara 2017 will be an awe-inspiring affair after last year’s low-key celebrations due to drought and it looks like the State Government will ensure that it is a grand celebration as Karnataka will go to polls in early 2018.

At the first preliminary meeting of Dasara Committee held this morning at the Government Guest House that was chaired by PWD and District In-Charge Minister Dr. H.C. Mahadevappa, it was decided to make it a celebration worth to remember.

The meeting was attended by officials from various departments and the Police.

The practice of designing new logos every year will be discontinued and a permanent and attractive logo will be designed this year that will be followed in future years, said Minister Dr. Mahadevappa. The logo will reflect the heritage of Mysuru and the contributions of Wadiyars who ruled Mysore.

Steps will be taken to release the pending Rs. 6 crore out of the Rs. 14 crore that was earmarked for last year’s Dasara. The Minister told the district administration to send a proposal so that the money can be released. 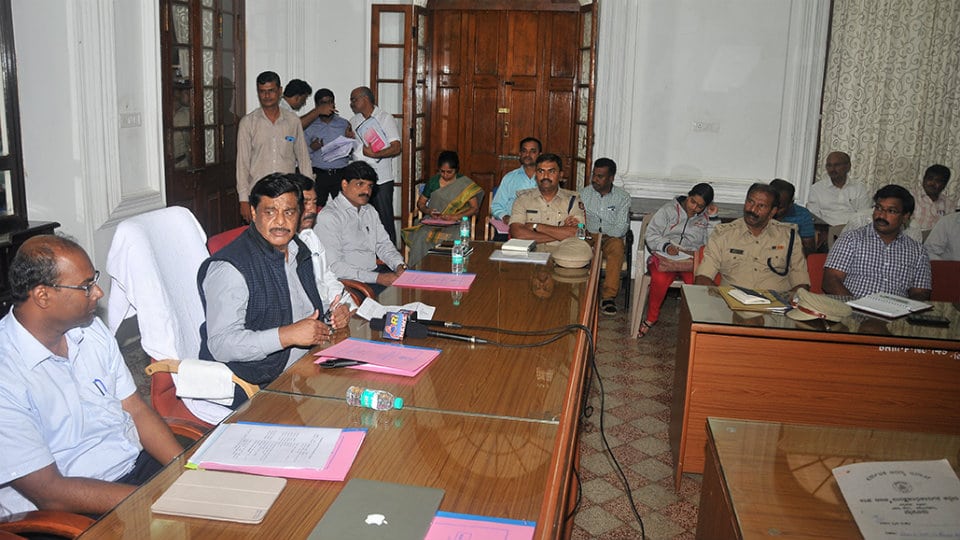 “Separate seating and viewing arrangements will be made for foreign nationals and the premium guests of Tourism Department and the Karnataka State Tourism Development Corporation,” Dr. Mahadevappa said.

Most likely, the first ‘Gajapayana’ (the journey of Dasara jumbos from the forests to Mysore Palace) will be held on August 10 and this too will be made a tourist attraction.

This year’s Dasara budget will be decided on July 17 or 18 at the High Power Dasara Committee meeting in Bengaluru to be chaired by Chief Minister Siddharamaiah. “We will bring back the Gold Card scheme this time and sell them online,” he added.

For publicity, banners, brochures and other publicity material will be sent to neighbouring States along with vigorous online and offline marketing campaigns. Publicity material and giant cut-outs will be installed at airports and efforts will be made by the respective departments to bring in more foreign tourists, he  said.