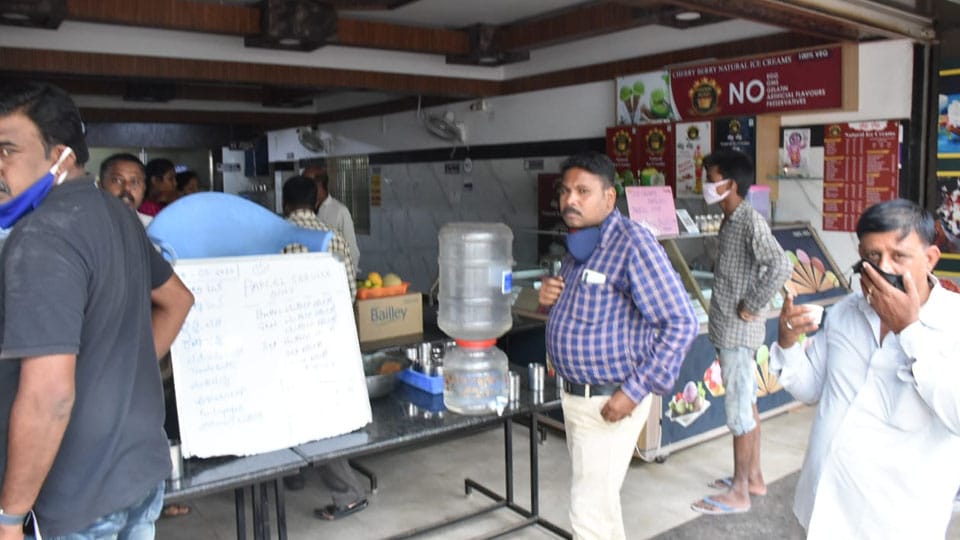 Decision hinges on hoteliers’ meeting with CM in Bengaluru today

Mysore/Mysuru: The Karnataka Government is in a dilemma over responding to the demand of hotels and restaurants to re-start full operations as the Centre is yet to provide guidance on the issue. The cash-strapped industry has threatened to halt food takeaways if hotels and restaurants are not given approval to open their doors.

Reports from Bengaluru say that the industry representatives are scheduled to meet Chief Minister Yediyurappa today with their concerns and much depends on the outcome of the meeting. During their previous meeting last Tuesday, the CM sought three days’ time to decide on allowing dine-in services. “If the Government refuses permission for dine-in, we will withdraw the parcel services and close down hotels across Karnataka,” Karnataka Hoteliers’ Association President Chandrashekar Hebbar told reporters in Bengaluru.

Meanwhile, many hotels and restaurants, especially the ones that are dependent on domestic and international tourists, are set to close down in Mysuru as they are unable to cope up with losses and even if the industry opens up, it will take months for the hotels to recover from losses.

Mysuru City Hotel Owners Association President C. Narayanagowda has been appealing to the Government to relax rules for them to operate as the Government has permitted all industries to open with the guidelines. “Last week, ‘Southern Star’ in Mysuru closed down due to losses and today, ‘Anima Madhva Bhavan’ on Kalidasa Road announced that it will close down as it is not financially viable to operate even if the hotel industry opens,” he told ‘Star of Mysore.’

There are over 8,500 rooms in over 350 hotels in Mysuru and there are hundreds of standalone darshinis and many reputed hotels. “At least 20 of them are set to close down. What is the point in allowing public movement and opening up of all industries by disallowing hotels? Where will the people eat? Just parcel service is not working out. We will know exactly how many hotels are closing down after the Government allows us to operate,” he said.

K. Dilip Biddappa, who owns ‘The Roost’ on Hunsur Road, says that it is uncertain if he will open his hotel. “This is a private property and I had leased it out to open this hotel. The lease period will end in another 2 months and I have requested the landlords to extend the lease by another 10 years. It all depends on their decision. Even if the lease is renewed, I need Rs. 50 lakh to start operations including employee salary, maintenance, infrastructure costs and operational costs. I cannot recover this money in two months, I am keeping my fingers crossed,” he said.

Tarun Giri of Siddhartha Group too said that the industry is in dire straits. “The issue here is that there is no clarity from the Government on the date that the hotel industry will be allowed to operate at a time when every industry is functioning. Amidst the uncertainty, Excise officials are pestering us to pay the licence renewal fee. How should we pay when there is no business,” he questioned. He added that the Government must defer the licence payment deadline by three months.