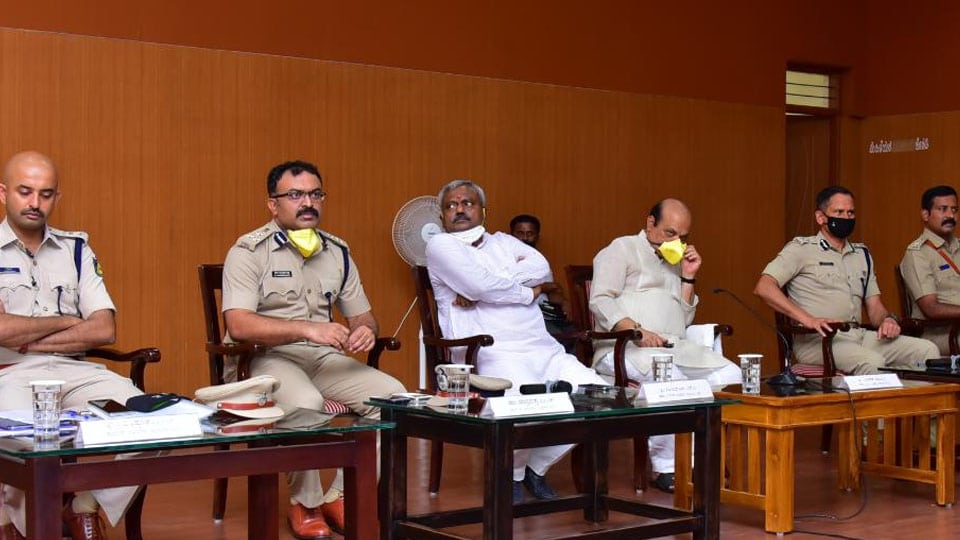 Mysore/Mysuru: Mysuru has become a model district in the entire country in controlling COVID-19, said Home Minister Basavaraj Bommai. He was speaking at a programme organised by AYUSH Department and Krishnaraja MLA S.A. Ramdas to distribute ‘health kits’ to public at Samrat Kalyana Mantap in Kuvempunagar yesterday.

Inaugurating the programme, the Home Minister said that the killer virus was under complete control due to the efforts of the Mysuru District Administration, Police and Corona Warriors. Even people of Mysuru have co-operated with the District authorities, Bommai said.

Both the Centre and the State were in a relentless battle against the pandemic and were announcing various packages for economic revival and money is being pumped in to bring the economy, industries and agriculture back on track. He complimented Ramdas for distributing health kits for the people of his Constituency.

District Minister S.T. Somashekar too lauded the administration for controlling the virus spread and also the MLA for coming to the rescue of people in distress by providing food to thousands of people during the lockdown. “COVID-19 is under control in the district and the district administration has taken all measures to contain the spread of infection. The authorities concerned are monitoring the people entering from other States and also from Mandya,” he said.

At a review meeting of the Police Department held at SP Office yesterday, the Home Minister praised the role of Police in maintaining the law and order and at the same time assisting the District Administration in preventing the spread of virus.

“The Police have displayed and demonstrated their human nature while dealing with the people who violated lockdown rules. Without dealing with them heavily though it was mandated by law, you people have managed to convince people to stay indoors and as a result, the incidence of COVID is negligible in Mysuru though the positive cases initially were daunting,” he said.

“At a time when even the high-ranking officials at the Centre framed guidelines on containment zone, quarantine facility, red zone and others, you have shown courage to implement them in letter and spirit though there is no precedence to the pandemic,” Bommai said and called upon officers and Police force to continue their good work.