Home » News » Will Modi throw his hat in ring from Bengaluru South? 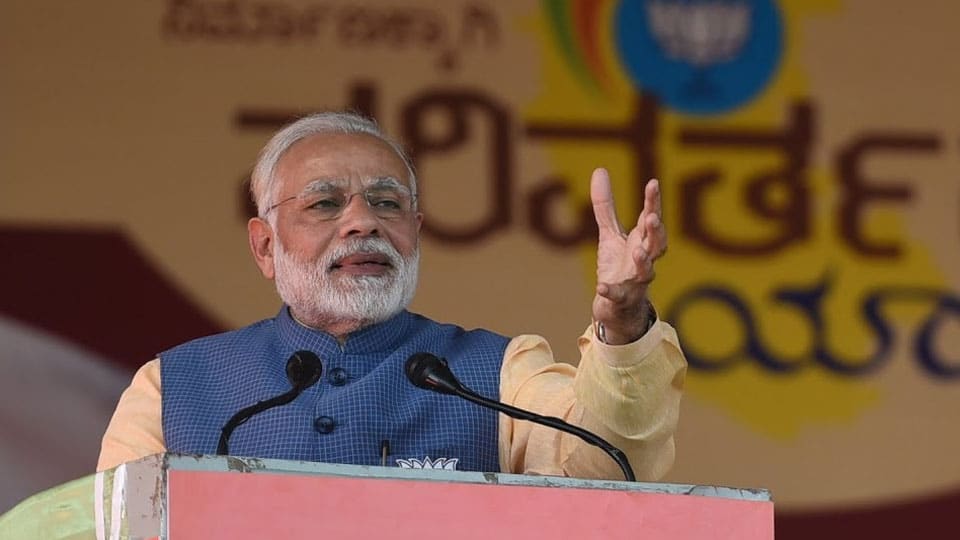 Will Modi throw his hat in ring from Bengaluru South?

Bengaluru: With the Central BJP leaders withholding announcement of the party nominee for Bengaluru-South Lok Sabha seat, are rife in the political  circles that Prime Minister Narendra Modi may to contest from there.

According to party sources, the candidature of Narendra Modi, from the seat cannot be ruled out. The presence of Narendra Modi, will have its cascading effects not only in Karnataka, but also can be felt in the neighbouring Tamil Nadu and Kerala also.

The Central BJP leadership, which had released the first list of the names of 21 party nominees to be fielded from Karnataka, had withheld the name of its nominee for the Bengaluru South for which polling is slated for April 18 in the First phase. Tejaswini Ananth Kumar, wife of Union Minister late H.N. Ananth Kumar was an aspirant for the seat represented by her husband for six terms since 1996. While a section of State leaders maintained that her name had been finalised and that her candidature would be announced shortly, sources said that the central leadership had particularly withheld her candidature as Modi was considering contesting from two seats, like in 2014. In the previous Lok Sabha elections, Modi had contested from Vadodara and Varanasi.

It is learnt that Modi was advised to zero in on a seat from Southern (Bangalore South) or Eastern India (Puri in Odisha or Kolkata), where the BJP’s presence is limited. The BJP is looking at winning 15 to 16 seats from Karnataka this time and if Modi contests from the State, then the party hopes to bag more than 22 seats.

This strategy would help BJP come back to power in Karnataka. “Modi’s candidature from Karnataka will upset the coalition applecart to such an extent that post-elections, the BJP will be in a position to form the government in the State,” said a leader. But BJP State President B.S. Yeddyurappa told reporters in Bengaluru that Modi will not contest from Bangalore South.

If Modi contests from Bengaluru South and Varanasi, he will win both. In such an event, he will retain Varanasi like last time and resign from Bangalore South, paving way for Tejaswini’s candidature,” said party insiders.