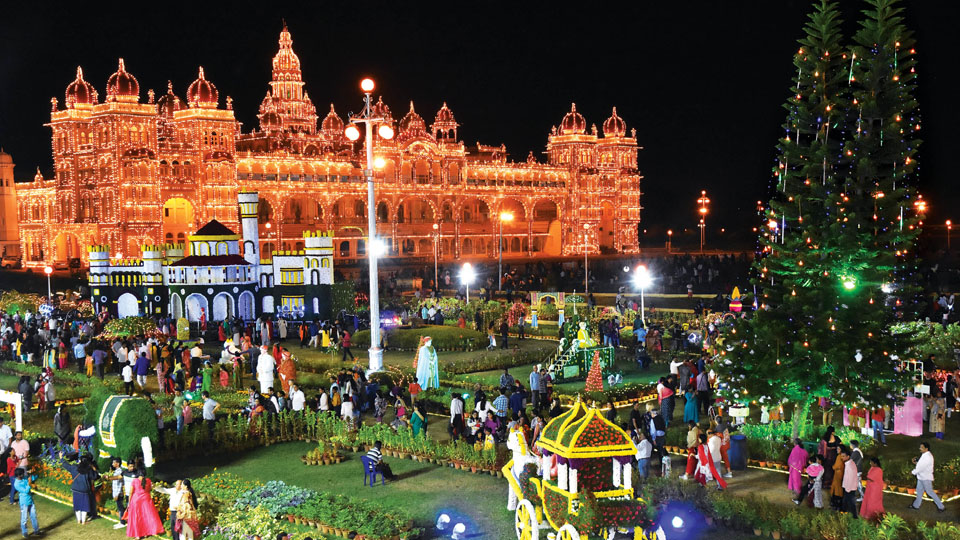 The Palace Flower Show was the ‘show-stopper’ of the 10-day Winter Festival that kicked off in city yesterday. Mysuru District Minister V. Somanna and MLA G.T. Devegowda (GTD) inaugurated the Flower Show.

People who came there were shooed away by the Police and security guards. They were told to come after 4.30 pm. Though the inauguration was scheduled at 4.30 pm, it was finally opened at around 5.30 pm after Minister Somanna arrived at the Palace at around 5.15 pm.

As the Minister’s convoy entered the premises of Palace Board Office, folk troupes including a lone Patada Kunita performer and two Veeragase artistes and drummers began their performance. Minister Somanna was accorded a warm welcome by Palace Board Deputy Director T.S. Subramanya along with DC Abhiram G. Sankar, City Police Commissioner and Mayor Pushpalatha Jagannath.

The Minister was accompanied by MLA GTD. Interestingly, both GTD and Somanna travelled in the Minister’s car and sat next to each other, conversing.

As the Minister was being welcomed, tourists stood around the Palace Board Office waiting for the Minister to inaugurate the Flower Show. It was made clear to them that until the VVIP cuts ribbons, they will not have a chance to see the splendid show. The crowd was getting impatient as they were waiting to see the flowers since at least two hours.

After the traditional welcome, the Minister was straight away led to a Ganesha Temple deep inside the Palace Board Office (this is not open to public) and a puja was performed. Minister Somanna and GTD requested Mayor Pushpalatha Jagannath and ZP President Parimala Shyam to be present alongside as the presence of well-dressed women near Gods is considered a good omen.

Without wasting any further time and probably realising that people have been waiting for hours to see the Flower Show, the Minister’s convoy headed to the Varaha Gate where the Flower Show entrance was set up. After the ceremonial tape cutting, the Show was declared open. Even after the inauguration, the crowd was not allowed to enter inside and only a select gathering was allowed. This was probably to avoid crowding of the place during a VVIP visit.

Thankfully the inauguration was over and people got a chance to see the floral arrangements. The main attraction was the floral model of Bangalore Palace, ISRO satellite launch, a replica of fighter pilot of IAF Abhinandan Varthaman along with his flying machine with a message ‘Salute to Indian Air Force,’ images of armed Indian soldiers amidst snow-clad mountains in Siachen, floral models of Jayachamaraja Wadiyar and Siddaganga Seer late Sri Shivakumara Swamiji, old Palace model and others.

More than 20,000 ornamental plant varieties, four lakh roses, chrysanthemum, ping-pong, carnations and other varieties of flowers were on display. Visitors were glued to their mobile phones, taking selfies and sharing them on social media.

As the entry to Palace compound and the Flower Show were free, there was a large crowd. As per conservative estimate, yesterday from 5.30 pm to 7.30 pm, over 35,000 people witnessed the fresh flowers smiling at them through various structures.

Along with the Flower Show, the other main attraction was the Patada Kunita and Veeragase performance that pulled the tourists towards them.

Seeing the enthusiastic and cheering crowd, the performers danced to drumbeats for almost an hour or so. While some school children and young tourists danced to the rhythmic beats, elders watched and clicked photos.

As the Veeragase performers flashed their ornate knives and stainless steel swords, tourists clicked photos from their selfie sticks. Encouraged by overwhelming response, the performance went on for some time with the tourists literally mobbing the artistes. They took videos of the dance and requested the artistes to pose for photos too.

Nilanjan and Neelima, who had come to Mysuru from Jhargram in West Bengal, were elated as the two Veeragase performers posed for at least 10 photos with them. “This is wonderful and we are hoping to have a great time amidst flowers,” said Neelima, flashing her white teeth, with a large smile.

Neelima said that they had read about the Palace but today’s visit and the Flower Show were never-seen-before-events.

When Star of Mysore told them that the Palace will be illuminated at 7 pm, they “wow”ed and were excited to see the lightings.

Patrick Finch, who had come from France along with his father, sister and two daughters, wore a confused look as they entered the Palace through the Varaha Gate and as the folk performance began. Patrick asked this reporter “Is this some kind of a festival?” On learning about Winter Festival, he said, “very nice and impressive.”

Taking out his expensive camera with a long lens, he began clicking photos of the surroundings. “We came to India a fortnight back and have covered Agra, Bhubaneswar, Ajanta and Ellora and Badami and Pattadakal. It is nice to be in Mysuru and you have a lovely weather here,” he said.

The crowd actually started pouring in after 6 pm and they were joined by the crowd that had been to the Palace. The magical moment, however, came at 7 pm when the lights of the Palace were switched on. For a couple of seconds, the crowds were awe-struck as they did not expect this. “Oh My God”, “This is the moment”, “Wow”, “Gosh, this is it,” were some of the expressions heard from the crowd as the magnificent structure glowed, brightening the entire premises.

Cameras were pulled out from the bags and phone cameras were switched on to capture the lightings. It was a Dasara-like atmosphere inside the Palace with all the gates, Palace and surroundings flush with lights. As an icing on the cake, the District Administration had affixed drop light bunches from trees and poles. The illuminated Palace stole the thunder out of the Flower Show for some time with people rushing to Palace compound to see the illumination from close quarters.

Praveen Bose, a journalist from Bengaluru who had come to Mysuru, told SOM that both the illumination and the Flower Show complemented each other and the District Administration was doing its best to attract tourist footfall.

“I was disappointed in the morning as I did not get rooms at the hotel of my choice. But now I realise that thousands of tourists have come to Mysuru for the Winter Festival and that is why the rooms are booked,” he said and added that he managed to get a room for his wife and kid at Nazarbad.

His wife, a shopaholic, had been to Forum Mall for shopping. “My wife and daughter are at the Forum Mall and I came here for the Flower Show. I am glad that I am here as I saw the mesmerising lighting too. At the same time I am feeling sad as my wife and child did not see this wonderful lightings. I will come tomorrow too with them,” he added.