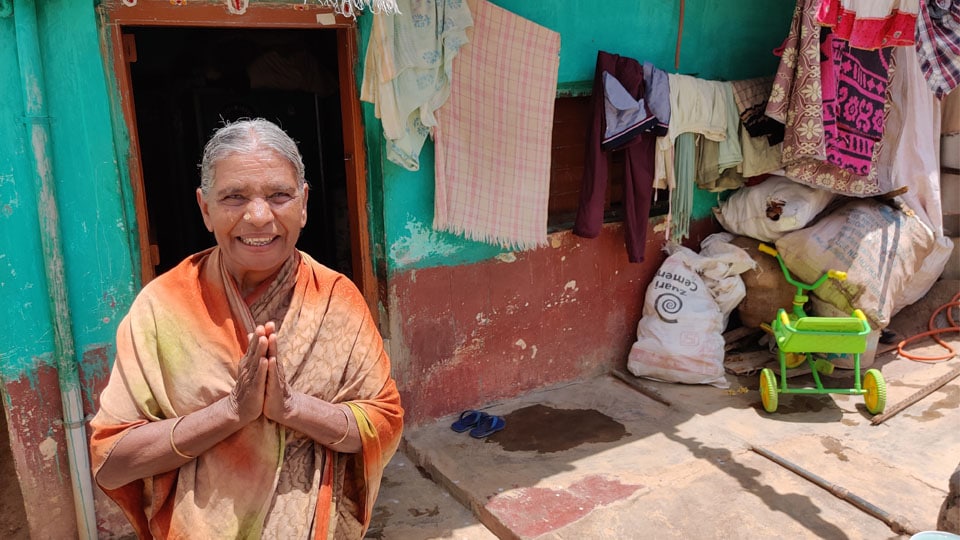 Herself a beneficiary of food packets distributed by Rotary Heritage Mysuru, 70-year-old Kamalamma had lost her job as house maid due to age factor during COVID lockdown.

Mysore/Mysuru: The COVID-19 pandemic has thrown the livelihoods of crores of people into a chaotic twister. Migrant labourers, daily wagers and footpath vendors have all had their only source of income snuffed out by the lockdown.

While many celebrities and politicians donated money, food and relief materials and filmed, photographed themselves while doing so, there are people who genuinely provided monetary assistance to the poor. Here is a story of a woman, who is poor herself and who has given away Rs. 500 of her Rs. 600 monthly pension to food-supplying volunteers.

Though the contribution might seem negligible, it is really big for the woman who earns a livelihood by working as a housemaid. She is 70-year-old Kamalamma, a resident of Chennagirikoppalu near K.G. Koppal. As the COVID crisis unfolded, she lost her job as house owners told her not to work in their houses anymore considering her age factor.

Though she had two sons, Kamalamma was leading a self-reliant life and was not dependant on anyone even after her husband’s death. She gets a Government pension of Rs. 600 a month and had no means for food during lockdown. Hearing her plight, a local area leader Mahadev approached Talakadu Manjunath of Rotary Heritage Mysuru to feed the woman as the Club had launched free food distribution — “Annadaana” — in Chennagirikoppalu and other city areas.

Manjunath had told the Club volunteers to supply food to a deserving Kamalamma too and she received food packets daily. 15 days back, after Kamalamma received her pension of Rs. 600, she told Mahadev that she wants to donate Rs. 500 for COVID relief food programme and she donated the money telling the Rotary volunteers that she could only contribute that amount.

In a social media post on May 12, D.N. Raghu Raghavendra said, “Today even as we, the members of Rotary Heritage Mysuru were busy in our ‘Annadaana’ preparations, a seemingly poor, over 70-year-old senior citizen, Kamalamma, walked in to the premise. Our natural expectation was that she might ask us for some food. Even as we extended the food packets to her, she refused. A little hesitatingly, she mustered some courage and took out something hidden behind the clothes and said, I have been watching you guys supplying food to my area for over 30 days now, so I just felt I should give you Rs. 500 from the Rs. 600 monthly pension I receive. It is a small amount, but please accept.”

“We were shocked and embarrassed that we offered her food. We were taken aback by her gesture of parting Rs. 500 out Rs. 600 pension she receives and that too in such difficult times. In spite of our several requests to keep the money, she insisted that we accept it which we did out of sheer respect for her,” he posted.

“At that moment we felt she is no less than the Tatas, Ambanis, Azim Premji or Narayana Murthy as she was parting with 90 percent of her monthly earnings. We could witness the magnanimity of a mother’s heart, however poor she might be. We were truly humbled,” the post read.