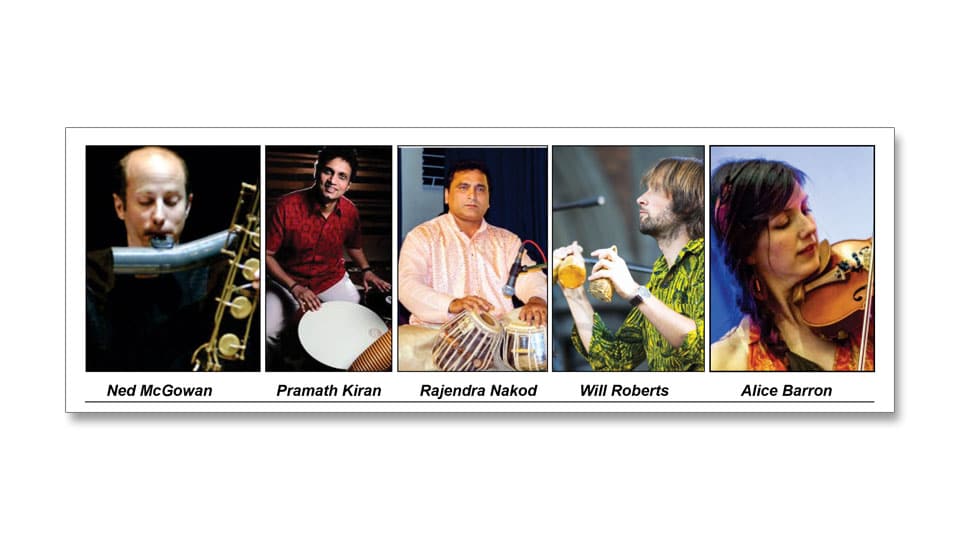 Kahlil Gibran said “Music is the language of Spirit. It opens the secret of life bringing peace, abolishing strife.” Music-lovers in Mysuru are in for an auditory extravaganza featuring different genres of Music —  Indian, Jazz and European Classical on Jan. 24 (Friday) at 6 pm at Vijaya Vittala School Grounds in Saraswathipuram, thanks to Sree Mookambika Creations.

This year, world renowned instrumentalists led by Mysore’s own musical prince, Dr. Mysore Manjunath are coming together on stage much to the music connoisseurs’ delight.

Internationally acclaimed Violinist Dr. Mysore Manjunath was a remarkable child prodigy who matured quickly to emerge as one of the top ranking Violinists in the music world today. From child prodigy to trailblazer, Dr. Manjunath has created an amazing record as Star Performer in prestigious organisations world over. Honoured with innumerable awards, he is one of the youngest recipients of prestigious Sangeet Natak Academy Award by the Government of India  and State Rajyotsava Award.

Ned McGowan is a Dutch composer, teacher, flutist, improviser, curator and researcher. A world class musician par excellence, Ned is considered one of the great modern day musicians in Europe today.  Known for rhythmical vitality and technical virtuosity, his music has won awards and has performed at Carnegie Hall, The Concertgebouw and other Halls and festivals around the world with many orchestras, ensembles and soloists.  Ned is a professor of composition, ensembles and advanced rhythm at the Utrecht Conservatory and Music and Technology branches of the HKU University of the Arts Utrecht.

Alice Barron is a renowned  violinist from UK with a western classical music background and varied experience in performance and research. Alice  studied at the University of Nottingham and Royal Academy of Music, London, where she was awarded a distinction for her Master’s in Performance and Research.

As a founding member of the experimental world music group, iyatraQuartet, her recent projects have included a co-written composition with Oud player Saied Silbak for a performance at the British Museum as part of the Sunken Cities exhibition.

Giuliano Modarelli is a world renown guitarist, composer and producer from Italy. Adept at jazz, his unique and exceptionally innovative style has led to successful collaborations with many leading international musicians. He is the co-founder of the award-winning music collective Kefaya through which he combines traditional forms with a range of contemporary influences to reinvent the sound of folk music.

Pramath Kiran, a well-known percussionist from South of India, hails from a family of art connoisseurs. Kiran is known for his traditional and intricate style of playing different percussion instruments with a blend of modern accompaniment techniques. He is the founder member of Layatharanga, one of India’s top world music bands featuring Indian and world percussion.

Will Roberts, a native of Cuba,  is a brilliant multi-talented instrumentalist and special percussionist. He has studied at The York University and instituto Superior Des Artes in Havana-Cuba. Having studied Brazil and Indian Music, Will has a great perception of world music and has widely performed in Europe experimenting in cross genre projects. He also plays clarinet and guitar.

Rajendra Nakod comes from a family of distinguished classical musicians. His father, Pandit Arjunsa Nakod was an eminent vocalist. Rajendra had his early training under his father and later under his brothers, Pandit Raghunath Nakod and  Vishwanath Nakod, both outstanding tabla players. Rajendra has performed at various classical music fests all over India. An “A” grade artiste of All India Radio, he is equally at home with solo performances.

Each artiste is a force to reckon with in his or her genre(s) of music and when such musical forces come together, it promises to be a memorable evening for music-lovers. —Sridevi Iyengar