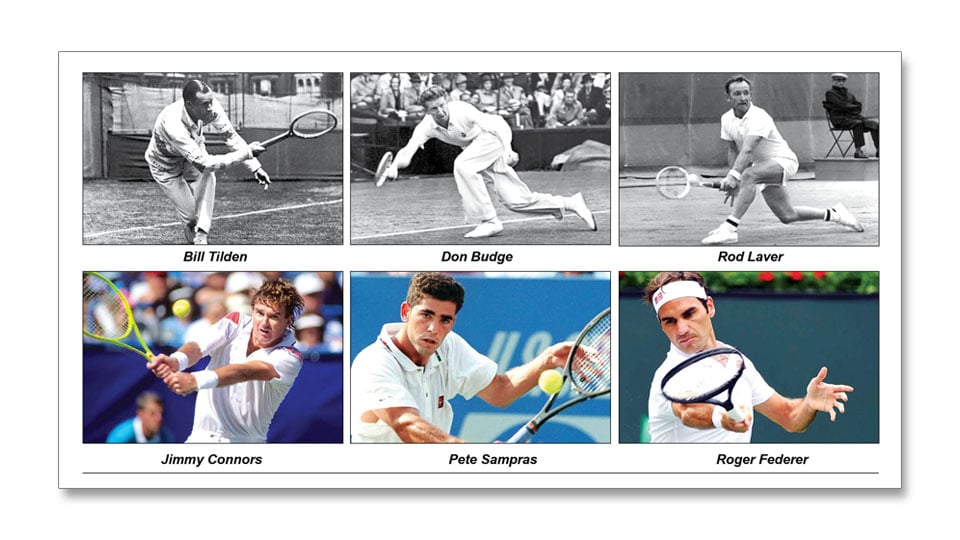 The Association of Tennis Players (ATP) has an excellent quantitative system for ranking current players based on each player’s performance on a moving 52 week period. The ranking goes down to below 1000 and one can see how a current player is performing on a weekly basis.

However, comparing tennis players of different eras (spread well over 100 years) and ranking them is not that straight forward and subject to criticism by other analysts and experts. Yet, practically all tennis writers and analysts have done exactly the same thing and here I am jumping in to the same bandwagon.

Let me first give a slight historical background. Newport-based ‘The International Tennis Hall of Fame’ releases an ‘All Time Top Ten’ male player’s list at the end of each year. The same is reproduced in the Table alongside. In addition, in 2013, John Bercow, sitting Conservative MP and now the Speaker of the House of Commons, who is also a great tennis lover and an analyst, published a book named “Tennis Maestros: The Twenty Greatest Male Tennis Players of All Time.” His list is also attached herewith.

Around the same time, US based ‘TENNIS’ Channel arranged a TV show named ‘100 Greatest of All Times’ which included female players also. While the panel consisted of well-known sportspersons of games other than tennis like Jack Nicklaus (Golf), Wayne Gretzky (Ice Hockey), Jerry Rice (American Football), Lisa Leslie (Basket Ball) and Carl Lewis (Track and Field), they were also assisted by some of the past great tennis players like Rod Laver, Bjorn Borg, Pete Sampras, etc. This list has been updated subsequently to include the newer great players like Novak Djokovic and presented in the table below.

All the above mentioned lists are essentially qualitative. In the present exercise, an objective or a quantitative approach has been adopted using a Point Count System and the methodology used is as follows:

Using the above technique, point count has been calculated for 149 players who have won at least one Major title and the data for the top 30 players is attached here in a tabular format.

A review of this table brings out some very interesting facts. One of them is that during the first nine decades (between 1920 and 2010), every decade has produced 3 to 4 top class players who appear in this table. However, during the present decade (2010 decade), there has been no world class champion. That is because the three champions namely, Roger Federer, Rafael Nadal and Novak Djokovic, who made a name for themselves and got into this top 30 club during the last decade, are still ruling the roost!

The second observation is that while the ranking by three other experts which is based mainly on qualitative analysis, the present one is based strictly on quantitative method. Yet the top five rankings are more or less the same in all studies. One minor difference is by MP John Bercow. He has placed Djokovic as 16th ranked player and this is understandable as his ranking was done in 2013 and at that time Djokovic was emerging as a budding champion. He in fact grew to his present status during the past five years.