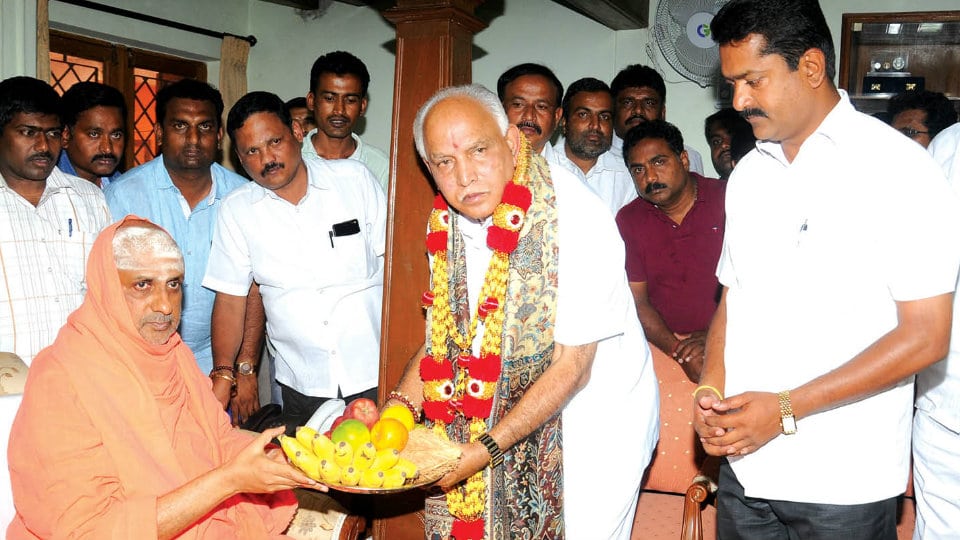 Yeddyurappa, who has been camping in the city, leading the BJP’s campaign for Nanjangudu and Gundlupet assembly seats by-poll, visited the Mutt yesterday afternoon and held talks with the Seer for some time.

Later speaking to press-persons, he said that there was a wave in favour of the BJP candidates in both the assembly constituencies with the poll date nearing.

Launching a tirade on the Congress Government, he said that the Congress misrule will greatly help the BJP achieve wins in both the seats. Maintaining that no amount of campaign and spending money will help the Congress, the State BJP Chief expressed confidence that the party candidates will win hands down in both the Constituencies.

Responding to a question on Congress leaders meeting the family members of former Minister late M. Mahadev, Yeddyurappa clarified that Mahadev’s family members were with the BJP and he will hold talks with them soon.

Lashing out at the Congress for not announcing funds for Gundlupet while it (Congress) has announced Rs. 500 crore grant for Nanjangud, Yeddyurappa said that the Congress party’s action reeked of hatred.

Demanding a CBI probe into the content of the Diary found at Congress  MLC K. Govindraraju’s residence recently, the State BJP Chief said, Siddharamaiah’s true colours will came out if a CBI probe was ordered into the diary issue. Rejecting allegations that the BJP was disrupting House proceedings for political gains, he said that the BJP was playing the role of a constructive Opposition in the State Assembly.