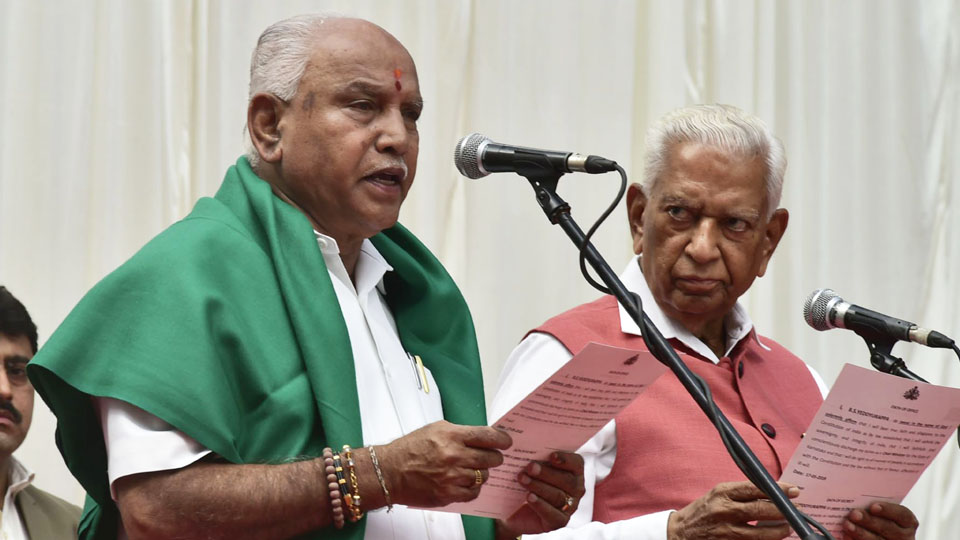 Bengaluru:  Amid protests by opposition parties, State BJP President B.S. Yeddyurappa took oath “in the name of God and farmers” as Karnataka Chief Minister this morning. Yeddyurappa was sworn-in by Governor Vajubhai Rudabhai Vala. This is for the third time Yeddyurappa is becoming the CM. The first time was in 2007 and the second was in 2008.

The oath taking ceremony took place at the Glass House of the Raj Bhavan at 9 am, a day after the Governor invited the BJP to form the government. The invitation followed a night-long court-room battle where the Supreme Court, hearing the pleas by Congress and the JD(S), refused to stay the swearing-in ceremony.

BJP emerged as the single largest party in the Assembly, secured 104 seats in the 224-member House (elections were held for 222 seats), just short of majority. Yeddyurappa has to prove its strength on the floor of the House within 15 days.

Dressed in white shirt and white trousers, Yeddyurappa was sporting a green shawl as a reminder of his commitment to farmers’ issue. The oath taking ceremony lasted just four minutes where the oath and office of secrecy was administered to Yeddyurappa by the Governor. His Cabinet will be named only after he proves his strength in a floor test at the Assembly. The programme was kept low-key, reportedly as per the Governor’s request. All the newly-elected MLAs, Union Ministers and party functionaries attended the ceremony. 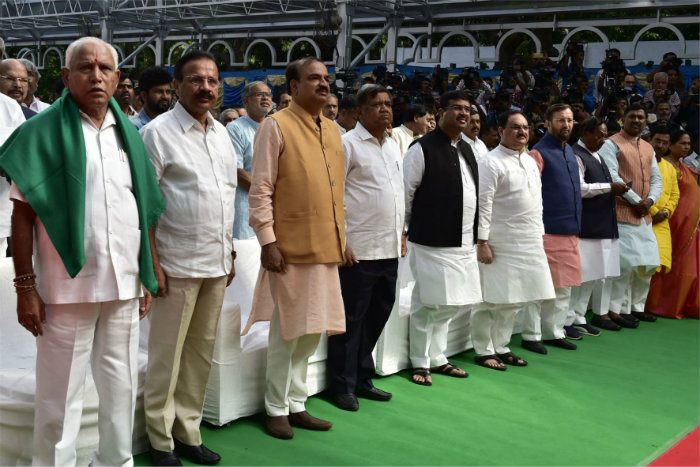 In his first remarks as Chief Minister, Yeddyurappa said, “Despite being rejected by the people, Congress and JD(S) have formed an unholy alliance. People will not accept this.” He also expressed confidence of winning the floor test. “I have been given 15 days, but I won’t take so long. I will prove the majority in the floor of the House soon. I am sure MLAs will vote according to their conscience,” he said.

Soon after the swearing-in ceremony, Yeddyurappa held a meeting with State Chief Secretary K. Ratna Prabha to decide on the first steps of his one-man Cabinet including farm loan waiver to the tune of Rs. 1 lakh from all cooperative and nationalised banks. 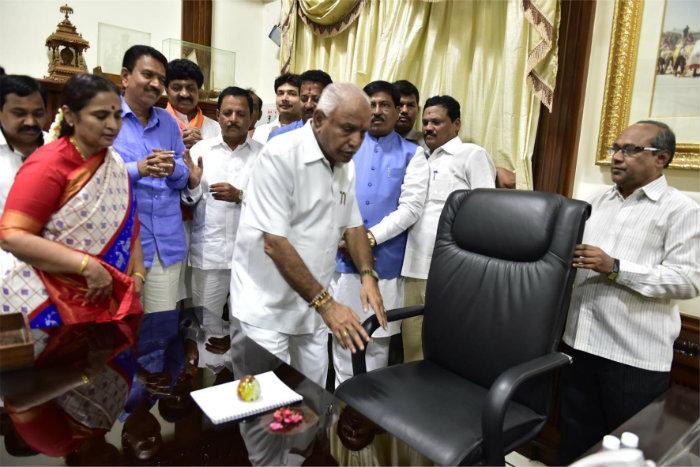 He told reporters that he has asked a report from the Chief Secretary on the financial health of the State and additional revenue sources so that the loans can be waived as promised in the BJP manifesto. “The decision will be taken soon,” he said.

BJP National President Amit Shah targeting Congress and its President Rahul Gandhi, said that the legacy of the party is the “horrific Emergency, blatant misuse of Article 356, subverting the courts, media and civil society”.

Hours after Yeddyurappa was sworn in, he added that the people of Karnataka voted for the BJP. “The ‘Murder of Democracy’ happens the minute a desperate Congress made an ‘opportunist’ offer to the JD(S), not for Karnataka’s welfare but for their petty political gains. Shameful,” he said.

2 COMMENTS ON THIS POST To “Yeddy takes oath as CM”