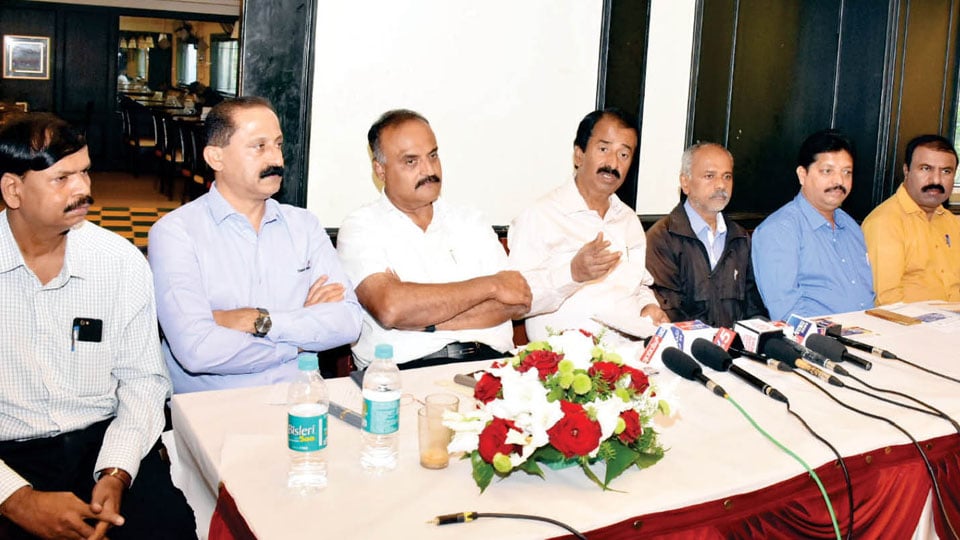 Mysore/Mysuru: Chief Minister B.S. Yediyurappa will be arriving in Mysuru tomorrow evening.   He will leave HAL Airport in a helicopter at 3 pm and land at Mysore Airport at 3.50 pm.

He is scheduled to release Senior Journalist Amshi Prasanna Kumar’s two books — ‘Mysuru Sutta Mutta 101 Pravasi Thanagalu’ in Kannada and ‘Mysuru – The Tourist Paradise’  translated into English by Dr. R. Nagabhushan — at a programme to take place at Kalamandira on Hunsur road at 5 pm on Feb.13.

Later, the CM will attend a wedding reception at Sa.Ra. Convention Hall on Ring Road at 8 pm and stay overnight in city. The CM will leave Mysuru by helicopter on Feb. 14 at 9 am to land at Vydehi  Hospital Helipad in Whitefield, Bengaluru, at 10.05 am.

Pointing out that the memorandum will contain a charter of demands to be incorporated in the forthcoming State budget, Vasu stressed on the need for improving  infrastructure in all Industrial areas of the region in order to attract more industries and investments.

Highlighting that the Government should focus on ensuring quality and continuous power supply, establishment of Food, Textile and IT Parks in Industrial areas, Vasu wanted the Government to continue 35 percent subsidy for Small Scale Industries as envisaged in the 2016 Industrial Policy, which has been temporarily stopped by the Government.

Continuing, Vasu wanted the Government to cut interest rates on Industrial loans, to earmark  3,000 hectares for establishment of major industries along Hunsur and H.D. Kote roads and appropriate sites around city for dumping Industrial wastes.

A memorandum containing all these demands will be presented to the CM, he said.

Pointing out that thousands of workers, mostly women, are working in these industrial areas, he urged the Government to establish a Police Station or an Outpost to ensure safety and security of workers.

Mysuru Travels Association Hon. President C.A. Jayakumar said that the entry tax for tourist vehicles in Karnataka is the highest in South India.

Maintaining that the high entry tax on tourist vehicles is proving to be a hurdle for attracting more number of domestic tourists, he urged the Government to considerably cut down entry tax as a tourism promotion measure and to announce policies in the budget that helps in boosting tourism in Mysuru region.

Expressing concern over the delay in issuance of CR (Completion Report) for buildings, he urged the authorities to expedite the same and thus come to the rescue of hotel owners and all others. He also wanted the Government to cut down entry tax for tourist vehicles.

MCCI President A.S. Satish said that the Government must widen all RUBs (Railway Under Bridges) on the Ring Road for safe travel. He also wanted the Government to set up a corpus fund exclusively for SSIs.

District Kannada Sahitya Parishat President Dr. Y.D. Rajanna said that the Chief Minister will be presented a memorandum on the overall growth of Mysuru region and promotion of Kannada.