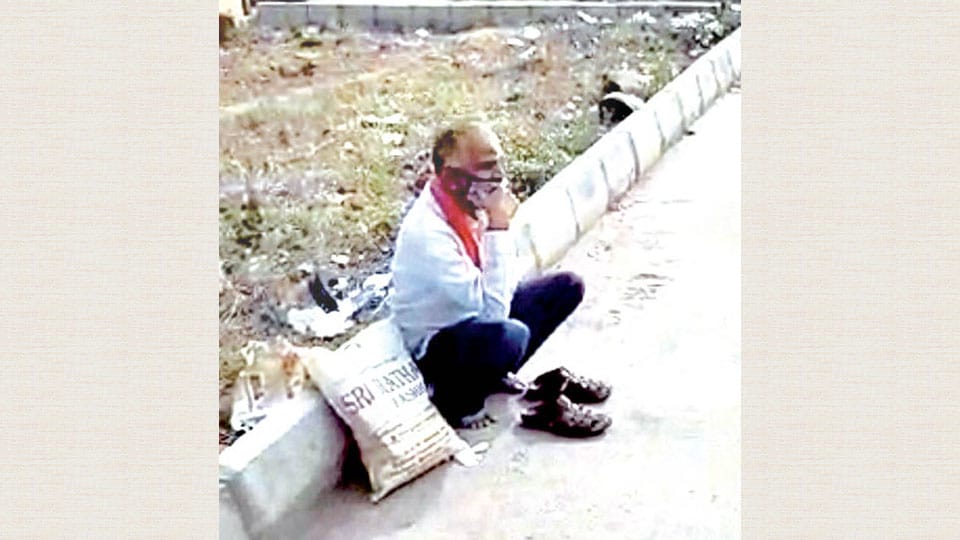 Youth turns back on his father after discharge from Hospital

An instance of deteriorating human relationships in COVID times

Mysore/Mysuru: The Coronavirus contagion has had significant effects on family and social relationships. While some have been strengthened, others have come under severe strain. Cooped up at homes, many have felt the strain on relationships as they worry about health, profession and finances — a domestic crisis behind closed doors.

Sadly, more and more elderly people feel that their health is deteriorating along with their relationship with family members. A sort of live example for this was seen at the District Hospital (COVID Hospital) in city last evening where a youth abandoned his 55-year-old father on the road and left in a huff after an argument. The youth was angry at his father for spreading the disease in the family.

The old man was admitted to the Hospital nine days ago as he was suffering from COVID and got discharged yesterday after his condition became stable. Accordingly, the Hospital staff had informed the elderly man’s family about the discharge.

The old man’s son had come to the Hospital in a scooter to pick up his father. After coming out of the ward, the old man felt dizzy and sat by the side of the road. Wearing a towel around his neck and carrying a plastic bag, the old man told his son that he was feeling exhausted and needed some time to get back his strength.

SOM reporter, who was at the spot, was a witness to the incident and below is the conversation between the father and son. Names have been kept confidential.

Old man: “I am feeling tired and need some rest. We can go after some time. You also wait with me.”

Son:“You have spread the disease to everyone in the family. Enough of this, will you come now?”

Old man: “Please understand I am not in a position to climb the scooter. I am tired and I need to sit for some time. We will go home later.”

Son:“We have to go immediately. Tell me if you are coming now or not. If you don’t come, I will leave.”

Moments later, the elderly man’s grumbling son started his scooter and sped away, leaving the old man on the road. After some time, the old man, walking in a bent posture, approached an auto rickshaw parked by the side of the Hospital and requested to take him to N.R. Mohalla.