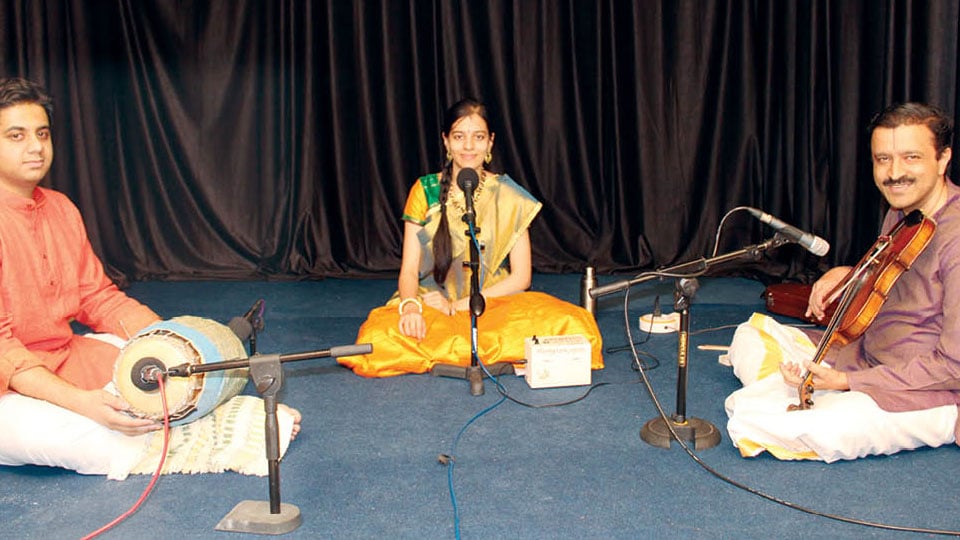 Mysore/Mysuru: Sri Thyagaraja Sangeetha Sabha, Mysuru, will be premiering an online vocal concert by Vidu. Aishwarya Manikarnike on its YouTube channel at 5 pm on Saturday (Oct. 31), under its “Yuva Sangeetha Sambhrama-2020”, showcasing the promising young artistes.

Aishwarya Manikarnike hails from a family of acclaimed musicians and adept both in vocal and veena playing. Her grandmother, Vidu. M.K. Saraswathi is a veena artiste par excellence and mother Vidu. Rajyashree Josyer Shrikanth is a vocalist and veena artiste. Aishwarya has received her musical training from both of them since a very young age.

She has performed in various reputed sabhas and received many laurels including a prize from Madras Music Academy.

Vid. Venkatesh Josyer will accompany her on violin and Vid. Malola Simha on mridanga.

Music-lovers are requested to watch the concert by visiting Sabha’s YouTube channel at Sri Thyagaraja Sangeetha Sabha Charitable Trust and support the young artistes, according to a press release from Vid. H.K. Narasimhamurthy, Sabha  Hon. Secretary.