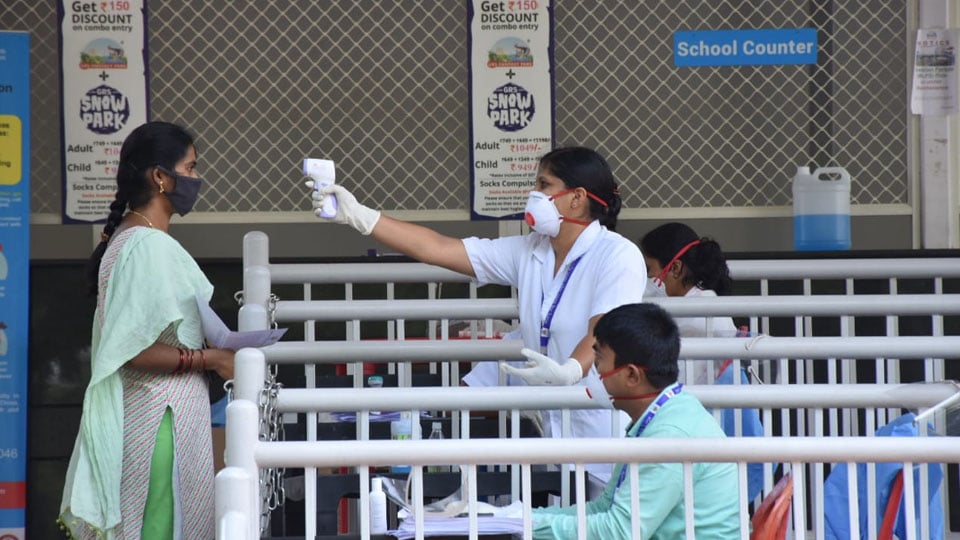 14-day quarantine must for all those returning to State

Bengaluru: All those who arrive from outside Karnataka should be compulsorily quarantined for 14 days even if asymptomatic before they are allowed to go home, said Chief Minister B.S. Yediyurappa.

The CM cleared a list of protocols for people of Karnataka returning from other States as well as from overseas. Special attention will be on people from five States — Tamil Nadu, Maharashtra, Gujarat, Rajasthan and Delhi — that have been categorised as high risk by the Ministry of Home Affairs.

The Chief Minister held a meeting with Ministers and bureaucrats at his Home Office ‘Krishna’ yesterday to discuss the State’s preparedness for the return of thousands of people of Karnataka stranded in other States and countries.

This is in the light of several COVID-19 positive cases being reported in the State in the past few days having a travel history of Rajasthan, Maharashtra and Gujarat. According to sources, the meeting also decided that those returning to Karnataka have to compulsorily register online.

All those who arrive shall be kept under quarantine for two weeks, and only those who are ready to undergo quarantine must register their names. The applicants must inform their place of arrival and date while registering, and they will be allowed according to the availability of quarantining facilities.

All those who arrive in the State will have to undergo a mandatory swab test for COVID-19, even if they are tested elsewhere. Mysuru Deputy Commissioner Abhiram G. Sankar too has issued a media release that all inter-State passengers will be subjected to facility quarantine for 14 days.

“It is hereby brought to notice of all who wish to enter Mysuru district from other States that, in order to prevent and contain COVID-19 in our district, all inter-State passengers will be subjected to facility quarantine for 14 days. They may either opt for a hostel (free of cost) or hotel (on payment basis). Home quarantine is not permitted for inter-State passengers. Kindly take note and co-operate in public interest. All will be tested for COVID on the 14th day of arrival,” the DC’s note said.

Meanwhile, an Air India repatriation flight (1803), carrying 323 passengers, arrived from London at Kempegowda International Airport at around 4.47 am today. The passengers were screened and checked and were also handed over a self-declaration form by the Health Department officials in Bengaluru. Reports from Bengaluru said that all the 323 passengers were asymptomatic.

They were shifted to hotels for a 14-day quarantine in 16 government buses, officials said. None of them have arrived to Mysuru. In the coming days, Mysuru is expecting over 2,500 international travellers and the District Administration has taken over 170 hotels in city to accommodate them and the travellers will pay the hotel charges.

In another significant decision, the Government decided not to bring back the body of anyone from Karnataka who dies while in another State. The last rites in such cases shall have to be performed in the State where the death occurred, it was decided.

Yesterday, the Mandya District Administration denied permission to bring the body of a Maddur woman who died in Pune, Maharashtra. The family members, who were bringing the body, were stopped at the State’s border.

The woman was a software engineer in Pune and passed away yesterday. The issue was brought to the notice of the Mandya District Administration which directed to subject the body to COVID test. Later, the family members of the woman decided to conduct the last rites in Maharashtra itself.