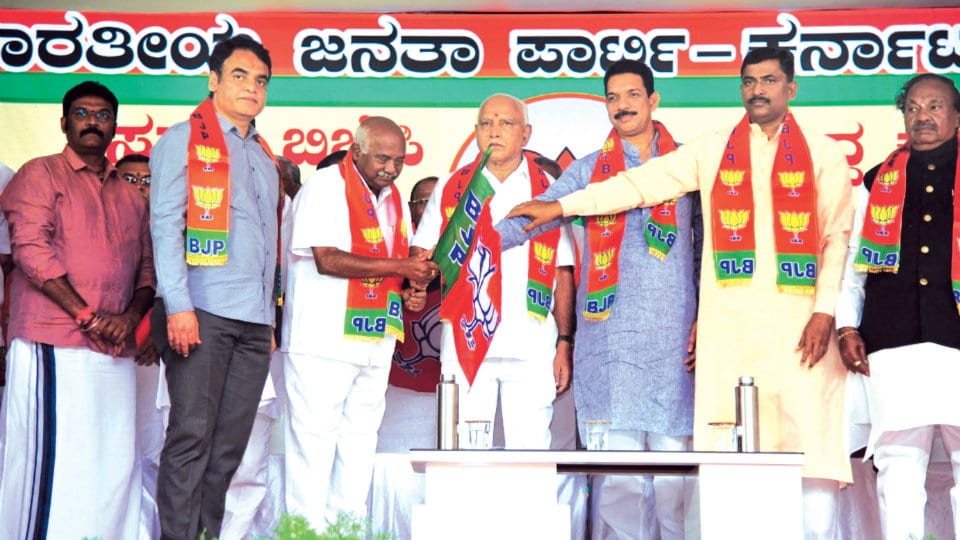 Bengaluru: A day after Supreme Court ruled that all 17 disqualified Karnataka MLAs can contest by-polls, 15 of them joined BJP this morning at party headquarters in Malleswaram, here.

However, the other two disqualified MLAs Roshan Baig and MTB Nagaraj were not seen at the venue.

Sources said MTB Nagaraj, who had already joined BJP, was in his constituency to file his nomination papers. Sources added that the BJP was contemplating whether to welcome Roshan Baig to the party fold or not as there are allegations about him being involved in multi-crore IMA Jewels scam.

‘They are future MLAs and Ministers’

CM Yediyurappa after inducting the disqualified MLAs to the party fold said, “They (disqualified MLAs) are future MLAs and future Ministers.” He also added that BJP would keep its promise to the rebel legislators and said that new members of the party be will be candidates for the upcoming by-elections from BJP.

These MLAs have sacrificed everything to ensure that BJP comes to power in the State. Due to this, all BJP workers should join hands and ensure that they are re-elected to the Assembly, said CM Yediyurappa.

The CM also expressed confidence that the ruling BJP would secure all 15 seats in  by-polls.

Prior to joining the saffron party, all the 15 disqualified MLAs visited Kadu Malleshwara Temple near State BJP Head Quarters and offered special pujas.

Nominations to by-polls will be filed Nov. 18. Voting will take place on Dec.5 and counting on Dec.9. The ruling BJP will have to win 7-8 of the 15 Constituencies to ensure majority for the Government. By-polls has not been announced in Maski and Rajarajeshwari Assembly Constituencies as petitions are pending in Karnataka High Court relating to 2018 Assembly election.