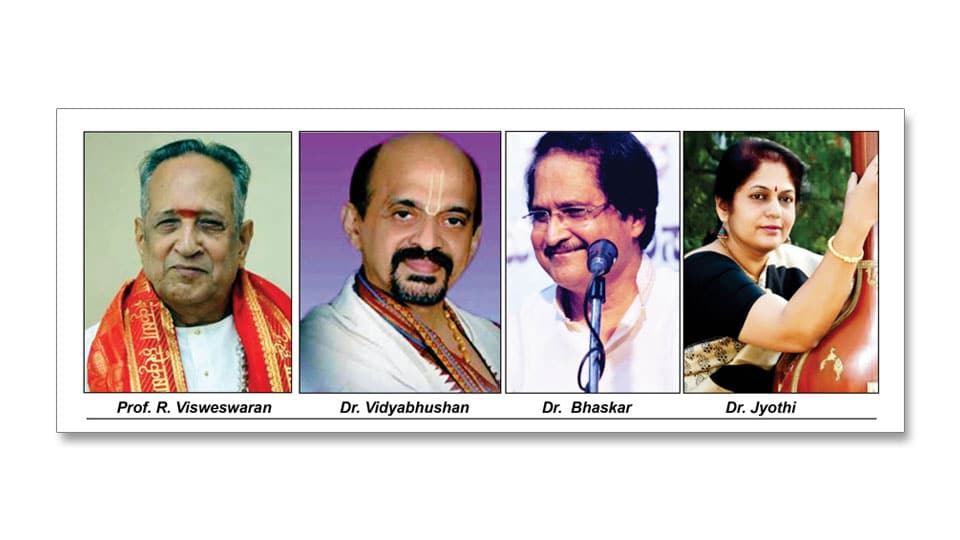 Mysuru/Mysore: As part of the 18th anniversary celebrations of Sri Krishna Gana Sabha, Mysuru, music concerts have been organised on Mar. 12, 14 and 15 at Alwar Kala Bhavan in Gokulam.

This will be followed by a Hindustani vocal music concert Dr. M.S. Bhaskar with Pandit Veerabhadraiah Hiremath on harmonium and Pandit Ramesh Dhannur on mridanga.

Sangeetha Vidyanidhi Dr. Vidyabhushan is a vocalist from Karnataka. He sings Haridasa compositions and Karnatak classical music. He has many albums to his credit, mainly devotional songs in Kannada, Tulu and has given concerts all over the world. His first album was titled “Dasara Padagalu” and the 100th titled “Tanu Ninnadu Jivana Ninnadu”.

Performing for more than 20 years, he has travelled to many countries including a tour across   the United States in 1999. He was honoured with the title of ‘Sangeetha Vidyanidhi’ in 1994. He was also honoured with an Hon. Doctorate by the Hampi Kannada University.

Dr. Vidyabhushan started his music training under his father late Sri Govindacharya at a very young age and for several years was a student of  Vidwan B.V. Narayana Aithal of Udupi. In the later years he got training from Sangeetha Kalanidhi R. K. Srikantan and then from T. V. Gopalakrishnan of Chennai.

He continues his activities in music and the spread of devotion and service to the community through Bhakti Bharathi Prathisthana, a Trust for which he is the Founder Trustee. The Trust conducts musical programmes like Purandaradasara Aradhana and other events. Presently Vidyabhushan is constructing ‘Purandarashrama’ in Bengaluru.

A native of Dakshina Kannada district, he lives with his wife and two children in Bengaluru.

Mar. 15 at 9.30 am: Tyagaraja and Purandaradasara Aradhana Mahotsava – Ghoshti Gayana followed by a music concert by Dr. M.A. Jyothi at 10 am at Alwar Kala Bhavan. Accompanying artistes are Vid. Keshavamohan Kumar on violin, Vid. P.S. Sridhar on mridanga and S. Manjunath on morching.

Jyothi is a seasoned musician, trained in Karnatak vocal. She was initiated into music by her mother Neeraja Achuta Rao. Jyothi has given Karnatak programmes at several organisations in London, Switzerland Chennai, Delhi, Mumbai, Thrissur, Bengaluru and Mysuru. She has also performed for All India Radio and on TV. Jyothi is noted for her mellifluous voice and clear diction and rendering with ease both traditional classical and lighter pieces.

Jyothi also learnt music from Vidu. Dr. Sukanya Prabhakar, later  from Vidushi Neela Ramagopal, Bengaluru and expanded her horizons greatly. Her aesthetic sensibilities refined greatly when she came under the tutelage of violin maestro Lalgudi Jayaraman. Jyothi is also a competent violinist and dedicates her time to teaching.