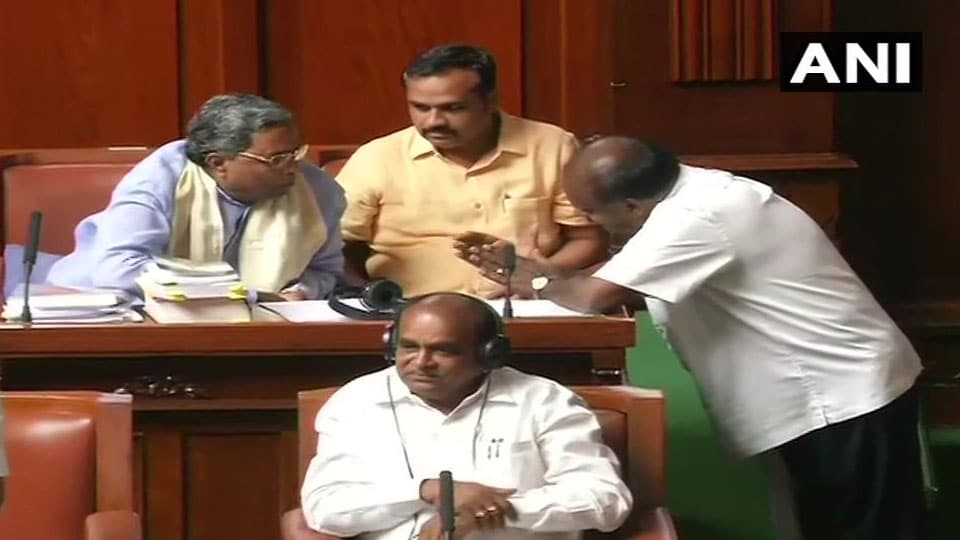 Bengaluru: The political drama in Karnataka will likely reach its climax from now on as the H.D. Kumaraswamy Government faces a floor test in the State Legislative Assembly. The Chief Minister has moved the confidence motion, and a debate is underway. The trust vote comes after a spate of resignations by MLAs from the ruling Congress-JD(S) coalition Government since July 6.

The Congress, meanwhile, issued a whip to all its MLAs, including the 15 MLAS who have resigned (MLA Ramalinga Reddy withdrew his resignation), to attend the trust vote as well as a separate whip to vote for the coalition. With 15 MLAs resigning and the lone BSP MLA N. Mahesh deciding to stay neutral, the strength of the coalition is likely to fall to 101 from 116. The BJP has 105 MLAs and the support of two Independents in the 224-member House.

The debate on crucial trust vote is underway and the government continues to dangle by a thread after the Supreme Court yesterday held that the 15 rebel MLAs cannot be compelled to participate in the proceedings of the Assembly session.

The Court order, which virtually sounded the death knell for Kumaraswamy, gave Speaker K.R. Ramesh Kumar the freedom to decide on the resignation of the rebel MLAs. Today, 20 coalition MLAs stayed away from the session.

Moving the trust motion, Kumaraswamy said, “I know the circumstances under which I have to face this trust vote. I have said earlier as well that power is not permanent.”

Addressing the House, Speaker Ramesh Kumar said, “When a member chooses not to come, our attendants will not permit them to sign the register of attendance. The concerned member will not be entitled to draw any emolument that is meant for the member to be drawn for being present in the House.”

“This House holds Supreme Court in highest esteem. Let me make it clear to leader of Congress Legislature Party that this Office is not restraining you from exercising any of your authorities. I’ve no role to play in that,” he added.

Former CM Siddharamaiah said, “Till we get clarification on the Supreme Court’s previous order, it is not appropriate to take a floor test in this session which is against the Constitution.” Right before the session was adjourned for lunch, Speaker Ramesh Kumar told the House, “I will neither be coerced nor influenced. I’ll be unbiased and impartial. I’ll be fair and judicious. This is my stand.”

Karnataka Pradesh Congress Committee President and party MLA Dinesh Gundu Rao said the Supreme Court has created a constitutional crisis by infringing on the Legislature. “The Supreme Court in its interim order has said the 15 MLAs cannot be compelled. This is the crisis. Let the Supreme Court decide on it in its final order. Till such time we appeal the Speaker to adjourn the confidence vote,” he said.

6 COMMENTS ON THIS POST To “20 MLAs skip trust vote, Government behind in numbers”