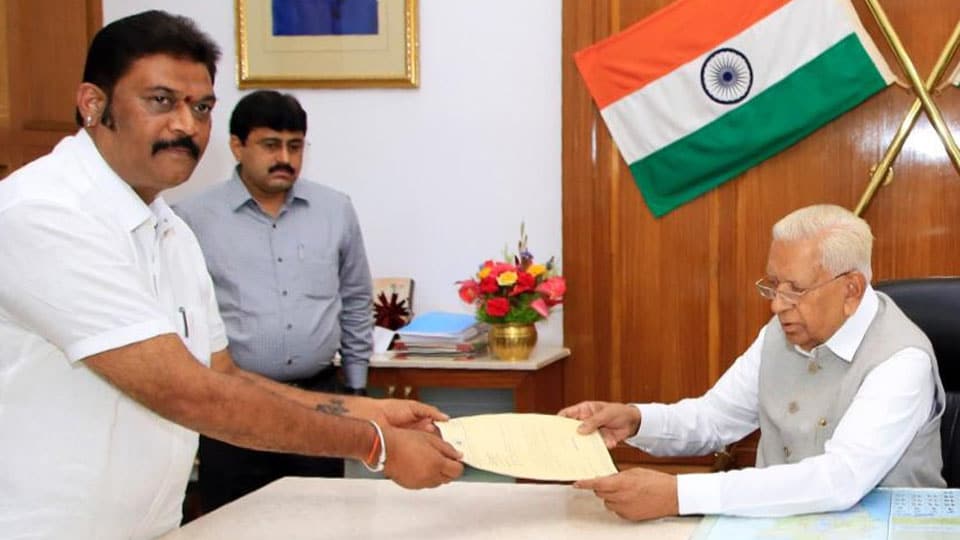 Bengaluru: Barely 48 hours after Chief Minister H.D. Kumaraswamy left for the US to participate in the bhoomi puja for Kalabhairaveshwara Temple to be built by Vokkaliga community, sections of MLAs from the Congress camp have become active and are said to be plotting to overthrow the 13-month-old JD(S)-Congress coalition regime.

Ballari Congress MLA (Vijayanagara) Anand Singh met Governor Vajubhai Rudabhai Vala this afternoon to submit his resignation. Speaking to reporters outside Raj Bhavan, Anand Singh said that he discussed with Governor on the reasons why he was keen to resign. He claimed that he has already submitted his resignation to Speaker K.R. Ramesh Kumar.

Anand Singh’s resignation fuelled speculation that Opposition BJP has renewed its efforts to poach rival party legislators to topple the JD(S)-Congress coalition government. Singh was recently upset with the coalition government’s move to give away 3,667 acres of land to Jindal South West Steel in Ballari.

Speculation was rife in the political circles that more than half a dozen disgruntled Congress and JD(S) MLAs will follow suit. Many of the Congress and the JD(S) MLAs are upset with their parties for not making them ministers.

Meanwhile, Chief Minister H.D. Kumaraswamy tweeted from New Jersey. “I am in New Jersey to participate in bhoomi puja for the Kalabhairaveshwara Temple in the presence of Poojya Swamiji (Nirmalanandanatha Swamiji of Adichunchanagiri Mutt). I have been observing the developments in the State from here. The attempts of BJP to destabilise the Karnataka government is like a perpetual daydream,” he tweeted.

Last month’s Cabinet’s expansion has left a section of Congress MLAs unhappy as they were jockeying for a Cabinet position, or at least chairmanship at a Board or a Corporation. Quite a few MLAs have switched off their mobile phones.

Two MLAs who are close to Ramesh Jarkiholi (Gokak), B. Nagendra (Ballari Rural) and Mahesh Kumthahalli (Athani) are also said to be planning to put in their papers. J.N. Ganesh (Kampli) and B.C. Patil (Hirekerur) may also follow suit, sources said. Patil had been an aspirant for a Cabinet berth, but he has been missing the bus.

Sources said that the BJP central leadership is not in a hurry to topple the JD(S)-Congress regime but it will not prevent if the regime were to fall on its own due to internal fights and conspiracies. The BJP, though made no blatant bids to disturb the government, however, has said it would welcome MLAs from rival parties if they were ready to join without any conditions or without expectations of a Cabinet position if the BJP were to form government later.