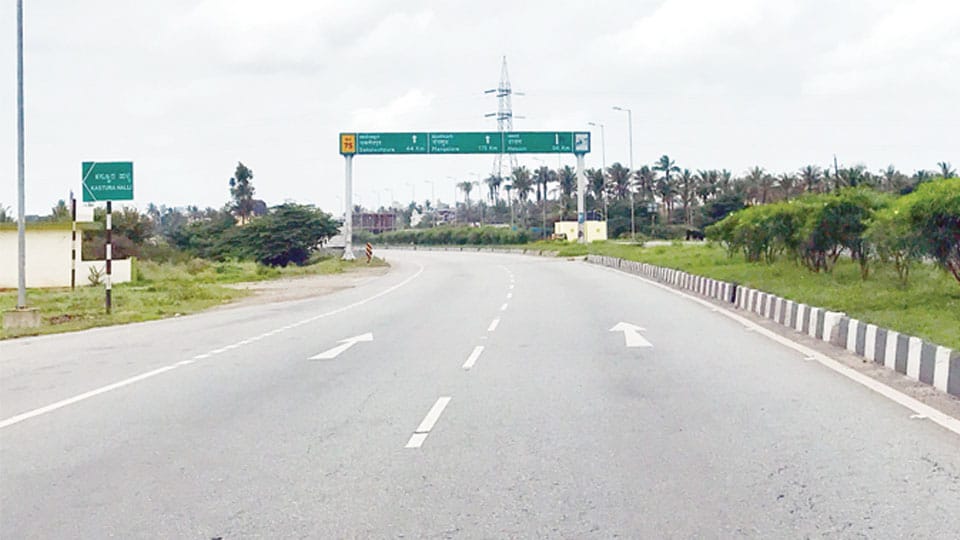 Mysore: The ambitious Peripheral Ring Road (PRR) as envisaged in the Mysuru Master Plan-2031 has proved a non-starter as the Mysuru Urban Development Authority (MUDA) has not even conducted a basic road survey – a prerequisite for any road infrastructure project.

Considering the exponential growth of Mysuru city in the next 25 to 30 years, where a population growth is pegged at 25 lakh, the MUDA, in 2016 had come up with an ambitious plan of constructing a Peripheral Ring Road on the lines of the roads that have been constructed in Andhra Pradesh.

The Peripheral Ring Road was proposed to be 120-km-long covering most of the city outskirts and was to connect the present Outer Ring Road that has been built to decongest the city. The Outer Ring Road project had proved a success to MUDA and the 42-km road carries most of the transport vehicles, eliminating their need to enter the Central Business District and cause traffic jams.

After developing the Outer Ring Road and installing street-lights, MUDA had handed over the stretch to National Highways Authority of India (NHAI) for maintenance. Considering the growth of the city, MUDA came up with the idea of Peripheral Ring Road that was proposed to be constructed beyond five to eight kilometres of the present Ring Road.

MUDA had prepared a budget of Rs. 750 crore for the Peripheral Ring Road in 2016 when K.R. Mohan Kumar was the MUDA Chairman. But for some reasons, the project has failed to take off and the basic land survey has not been initiated. Even the Comprehensive Development Plan (CDP) had mentioned about the Peripheral Ring Road and the circumference was earmarked where different government departments were told not to give the land for any other purpose.

Mohan Kumar told Star of Mysore that 52 percent of the land for the Peripheral Ring Road was already available with MUDA and only 48 percent of the land was to be acquired. The 120-km-long Peripheral Ring Road will be linked to the existing roads in the hinterland. MUDA needs additional land to the extent of nearly 920 acres. In all, the project might cost MUDA at least Rs. 1,500 crore, an official said.

When developed, the Peripheral Ring Road is set to pave way for inclusion of nearly 40 semi-urbanised villages on the outskirts of Mysuru. Later, the areas could be upgraded as Greater Mysuru, he added.

MUDA took more than 10 years to complete the 42-km Outer Ring Road and it had faced a lot of criticism then. “Now this same Outer Ring Road has gained much appreciation as it diverts goods carriers and traffic meant for industrial areas and reduces congestion within the city. It would have been impossible to control the traffic density inside the city if MUDA had not built the Outer Ring Road,” the official remarked.

But town planners have argued that the Peripheral Ring Road was not necessary as of now considering the current pace of growth of Mysuru city. They felt that the traffic density along the six-lane Outer Ring Road has not yet reached the saturation point. Besides, the area surrounding the Outer Ring Road is yet to be fully developed.

Only some areas like Bogadi have residential layouts with most of the other areas lying vacant, they pointed out.

It is true that MUDA had initiated the process of constructing Peripheral Ring Road in 2016 and it was mentioned in the Comprehensive Development Plan too. The project has not been scrapped and will definitely be taken up at some point.  We have initiated the process of calling tenders to determine the ‘Accuracy Mark’ of the road. A Detailed Project Report (DPR) will be submitted to the government soon. This road is necessary for city’s future growth.

Vehicle Density on the existing Outer Ring Road is increasing day by day and there is a need of Peripheral Ring Road. MUDA Commissioner has already discussed this with me and I will soon hold a meeting with the officials. The issue will be taken up at MUDA meeting too.

In 2016 we had proposed the Peripheral Ring Road project considering the growth of Mysuru city in the next 20 to 30 years. Rs. 5 lakh was also released to commission a land survey. This road is absolutely necessary to handle the future traffic and MUDA must prepare a Detailed Project Report to seek funds for the project.