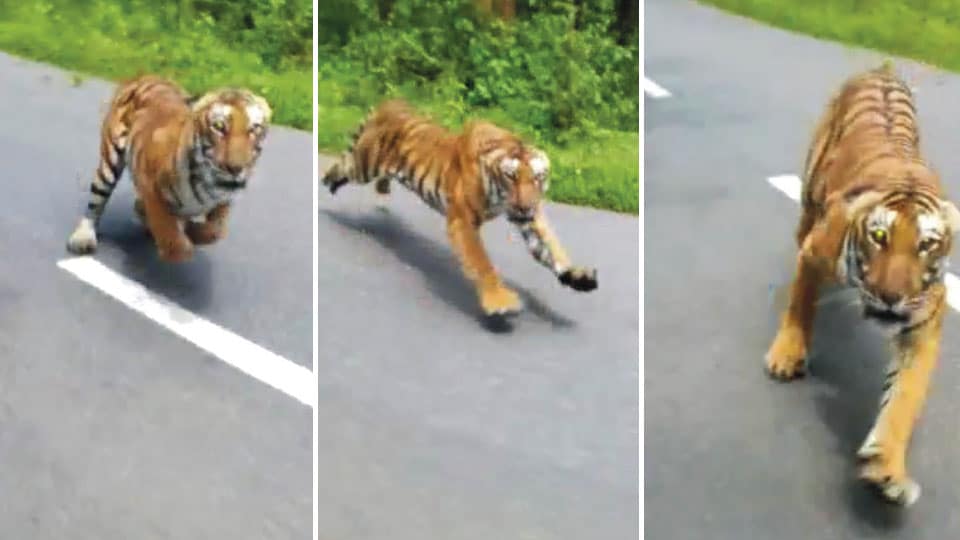 Mysuru: “Tiger Tiger burning bright…In the forests of the night…” wrote English Romanticism poet William Blake. Removed from the poetic world, tigers can also kill especially when we intrude into their territory and one must be doubly careful while travelling through forests.

Two bike-borne youths — Vimal and his friend from Wayanad — had a near brush with death as they had a chance encounter with tiger’s might as they came face-to-face to a tiger running towards them on the Karnataka-Kerala border near Wayanad on Wednesday at around 4.30 pm.

The video of the chase has gone viral. This hair-raising footage shows a huge tiger going after the bike at Muthanga Wildlife Safari in Wayanad near Pullpalli. It seems that the angry feline decided to chase the bikers off its territory. The youths were fortunate for the tiger did not catch up with them because one can’t even imagine what could have happened if the tiger had caught the bike and pounced on the men.

The feline, just 4 feet away from the bike, ran towards them for over 20 metres in a matter of seconds and it could have easily pounced on them. But the feline suddenly veered towards the dense jungle and also the bikers drove fast. The 22-second video was shot by the pillion rider who is also heard screaming as the feline chased the duo.

It is great luck to see animals in their natural habitat but sometimes it could be really dangerous even in a calm wildlife sanctuary. Forest officials and wildlife lovers say that the bikers would have disturbed the tiger. Seeing the crouching tiger amidst green growth, the excited youths could have slowed down to videograph the feline.

“The video clearly shows that the feline is being filmed as the bike is moving on its right side. As the tiger was provoked, it ran menacingly towards them and the feline moved from right to left side of the forests. Also, there is little chance of the pillion rider to videograph the animal if it had attacked suddenly. We must realise that the tiger was not attacking the bikers. Rather it was showing its natural reaction. We humans should be more careful as it is an animal territory,” said a Forest officer.

It is not safe for bikers to travel inside the forests. “It is better not to travel on bikes in forests. Cars or other four-wheelers can at least give protection to the travellers,” said another wildlife enthusiast.

While one can see many bikers traversing through the Bandipur Tiger Reserve every day, bike travel is banned inside the Nagarahole National Park.