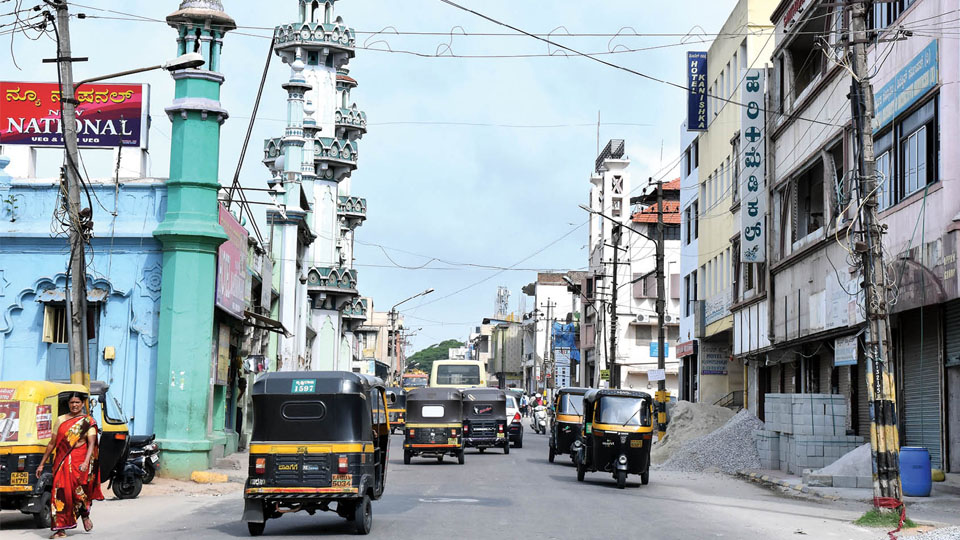 Mysore: The much delayed and controversial widening of Irwin Road in city has gained fresh traction with the Mysuru City Corporation (MCC) expediting land acquisition process, paying compensation for land and carrying out simultaneous demolition of acquired properties.

Already, 56 properties have been acquired and demolished and the process to demolish the rest of the properties has been set into motion. MCC officials are aiming to complete the project in another two months. That means, a brand new Irwin Road will be ready for Dasara 2019.

Irwin Road is one of the busiest roads and connects Sub-Urban Bus Stand to the City Railway Station. The 850-metre stretch of the road from Ayurvedic College Circle to Arch Gate on B.N. Road was to be widened either by 4 metres or 6 metres. Though the widening proposal was conceived four years ago, only a portion of the stretch — from Railway Station to Ayurvedic College Circle — has been widened. But more challenging for the MCC was the stretch from Ayurvedic College Circle to Nehru Circle which is around 650 metres in length and is both narrow and very commercially developed. The Irwin Road connects Taluk Office (Mini Vidhana Soudha), Sub-Urban Bus Stand, Head Post Office, K.R. Hospital, Government Ayurveda College, New Sayyaji Rao Road, Railway Station, Devaraja Market, Bamboo Bazaar, Ashoka Road and several other key offices.

There are 84 properties on both sides of the Irwin Road and the MCC has so far acquired 56 properties and has demolished them as per widening specifications. Rs. 16 crore has been paid as compensation for property acquisition and has completed the first phase of the project.

Funds for demolition: The MCC has fixed compensation at Rs. 13,072 per sqft, excluding the value of the building. For this, Rs. 37 crore has been earmarked. In the second phase, Rs. 7.5 crore has been released to demolish 20 properties.

The process of registration has been completed and the demolition work will begin, said Geetha Udeda, Assistant Commissioner, MCC Zone 6. Irwin Road comes under her jurisdiction. Only the remaining eight properties are contentious as some of the owners have approached the Court of Law against the demolition, she said.

The MCC top brass will decide on the Wakf Board’s proposal on rebuilding dome and minarates of Jumma Masjid soon and will give a push for the completion of the project. At the same time, legal process will be initiated to convince the Courts of Law on the necessity of widening.

Once the demolition process is cleared, works on widening the 850-metre stretch of the road from Ayurveda College Circle to the Arch Gate on B.N. Road will begin at an estimated cost of 4.5 crore.

“It will be a 60-feet (18 metres) road including footpath. The four-lane road will have a median on the middle and will have box drainage feature. The road will get a heritage character with traditional lamp posts,” the Assistant Commissioner said.

Of the Rs.23 crore reserved for demolition process, the MCC has so far spent Rs.15.85 crore. Among the contentious properties is the Jumma Masjid which was built by Nalwadi Krishnaraja Wadiyar in 1927 at a cost of Rs.38,000. Nalwadi had delivered the first sermon at the Masjid.

Last week, Mayor Pushpalatha Jagannath, MCC Commissioner Shilpa Nag met A.B. Ibrahim, Administrator, Karnataka State Board of Wakfs in Bengaluru and held talks. The Wakf Board has told the MCC that it does not want the compensation money but the MCC should build similar dome structure and minarets and also provide land in some other area to compensate the land loss to the Jumma Masjid. — Geetha Udeda, Asst. Commissioner, MCC