Home » News » 2021 Vidyaranyapuram jewellery shop dacoity case: ‘Bombay Budda’ who pocketed most of the looted gold still on the run 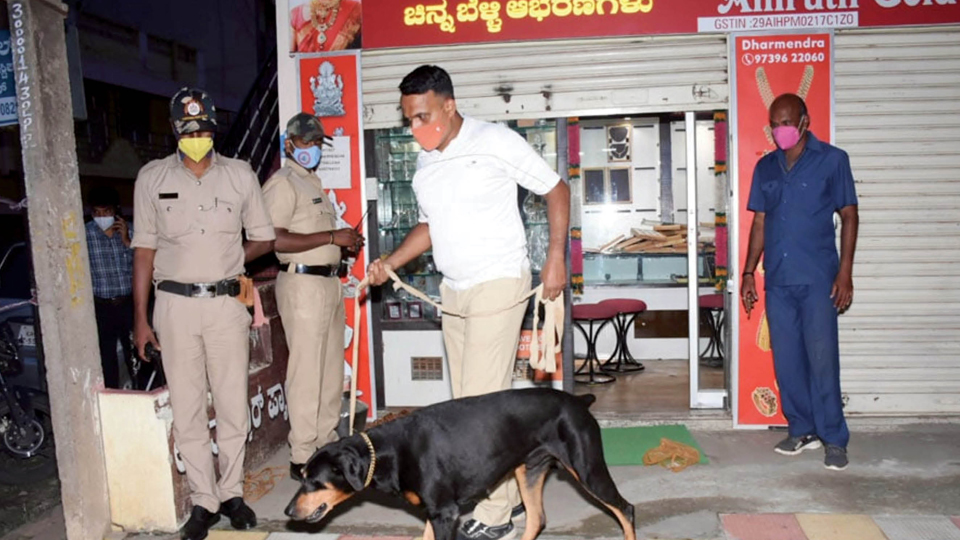 2021 Vidyaranyapuram jewellery shop dacoity case: ‘Bombay Budda’ who pocketed most of the looted gold still on the run

Mysore/Mysuru: In a major breakthrough, the City Police have arrested a Mumbai-based man who sold a pistol to dacoits to loot Amruth Gold and Silver Palace at Vidyaranyapuram on the evening of Aug. 23, 2021.

The gang had shot dead 24-year-old bystander Chandru of Dadadahalli while escaping. With the latest arrest, the total number of the accused nabbed in the sensational case has gone up to nine.

The accused, Rajan Nakul Das, has been brought to Mysuru for more investigation, confirmed Deputy Commissioner of Police (Crime and Traffic) Geetha Prasanna.

Speaking to Star of Mysore this morning, she said that the arrest was made by Inspector Raju and teams. Soon after the dacoity, teams of 25 officers and 80 Cops were formed by City Police Commissioner Dr. Chandragupta to crack the case.

Some of the team members, camping in Mumbai in search of the ninth accused in the case, nicknamed ‘Bombay Budda’, who is still at large, got clues about Rajan Nakul Das. The pistol used for the crime was found last year in a Mumbai drain.

Jehangir, one among the eight arrested, had pulled the trigger on Chandru while escaping from the shop after the loot. Jehangir had procured the pistol from Rajan Nakul Das from West Bengal. The Mysuru Police had taken Jehangir to Mumbai last year where he had thrown the pistol in a drain next to a culvert.

Police sources said that despite concerted efforts by the City Police along with Mumbai Police, ‘Budda’ is still on the run. He will be a prized catch as he has over 2 kgs of gold ornaments that were looted from the shop.

‘Budda’ literally means old man (in Hindi) as he is above 60 years of age. He pocketed most of the gold including ornaments like gold chains, necklaces, bracelets and heavy rings. He has been captured filling the gold into his shirt and trouser pockets.

In all, nine dacoits have been arrested including Mahendra, the mastermind, who owns Balaji Bankers and Jewellers near Mahadevapura Railway Gate, Mysuru.  Mahendra was facing severe losses in his gold business and had borrowed loans to the tune of lakhs of rupees. He knew that Amruth Gold and Silver Palace was doing good business and planned the heist. Mahendra invited the gangsters, some of them who are contract killers, to loot the Vidyaranyapuram shop. From conceptualising, planning and execution of the crime, Mahendra played a crucial role.

3 COMMENTS ON THIS POST To “2021 Vidyaranyapuram jewellery shop dacoity case: ‘Bombay Budda’ who pocketed most of the looted gold still on the run”