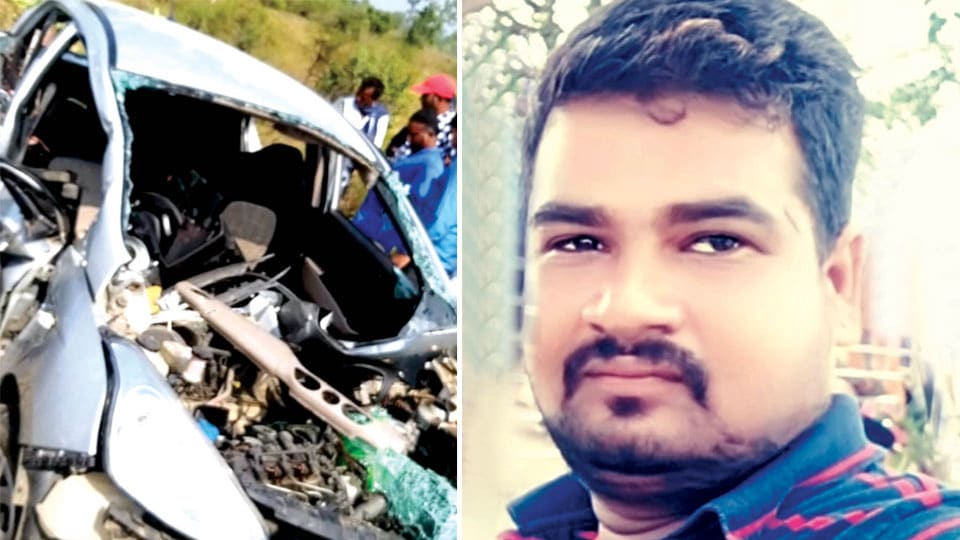 In the first incident occurred on Chamarajanagar-Mysuru Road, 50-year-old Yasin Wazir of Coimbatore district in Tamil Nadu and his three-month-old granddaughter Hina Fathima died and three other occupants of the car have been injured.

The second incident occurred at Kamagere in Hanur taluk where 35-year-old Shivakumar of Kamagere village was killed and his friend has been injured.

Family was attending a marriage

Yasin Wazir from Coimbatore, along with his family members, was proceeding to Chamarajanagar from Mysuru in Hyundai  i10 car to attend a marriage. The car was being driven by Yasin and he was said to be over-speeding.

As the car reached Muttige village on Chamarajanagar-Mysuru Road near Bendaravadi, Yasin lost control over the vehicle and it turned turtle. Due to the impact of the accident, Yasin and his granddaughter Hina Fathima died on the spot while Yasin’s wife Razia and the baby’s mother Sanofer Nasreen have been injured. Another co-passenger Safeen too sustained injuries.

The injured have been rushed to Coimbatore after initial treatment at Chamarajanagar District Hospital. Dy.SP Priyadarshini, Chamarajanagar Town Police Station Sub-Inspector Mahesh visited the spot along with staff and conducted a mahazar.

In the second incident, Shivakumar from Kamagere village was proceeding from Kamagere to Hanur in his Swift car along with his friend Mahesh Kumar. Shivakumar was behind the wheels and he too was said to be over-speeding. As the car reached Hanur-Mangala village, Shivakumar lost control of the vehicle and the car turned topsy-turvy.

Shivakumar died on the spot while Mahesh Kumar was seriously injured. Passers-by informed the Police and Mahesh Kumar was rushed to Kollegal Government Hospital where he was provided initial treatment. He was later shifted to Mysuru for further treatment. Hanur Police have registered a case.