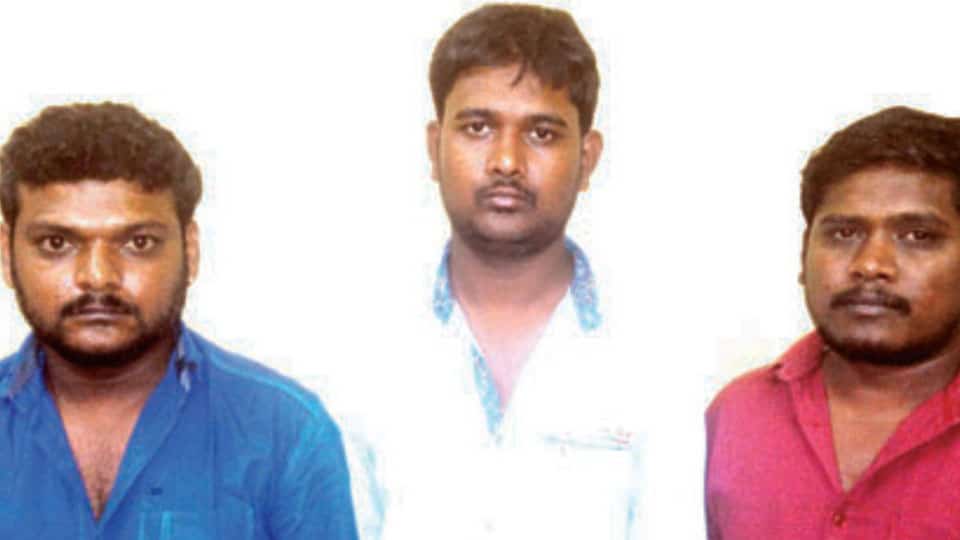 The arrested persons have been identified as 28-year-old Vinod, 30-year-old Jagadeesh, 24-year-old Sachin and 45-year-old Anasuya, all residents of Kyathamaranahalli in city.

It is reported that yesterday, counting of hundi money was taken up at the Temple in the presence of Canara Bank Main Branch Manager Mahadev, K.R. Police and officials from the Muzrai Department, during which eight hundis were opened for counting for which about 30 volunteers were deployed by the Bank.

During the counting process, Sri Chamundeshwari Temple Executive Officer Prasad saw Vinod, Jagadeesh, Sachin and Anasuya stealing money and hiding it in their clothes through the CCTV camera. He immediately rushed to the counting place and with the help of the Police conducted a search during which about Rs. 64,360 of stolen money was found from them.

The four persons were immediately arrested by K.R. Police and cases were registered against them under IPC Section 380 and were produced before a Magistrate who has remanded them to judicial custody.

Temple Executive Officer Prasad, speaking to Star of Mysore, said that the Temple hundis would be opened for counting in the presence of officials from the Canara Bank, Muzrai Department and Police officials once in three months.

He said that counting of money would be taken up under CCTV surveillance and added that such incident had never  occurred in the past.