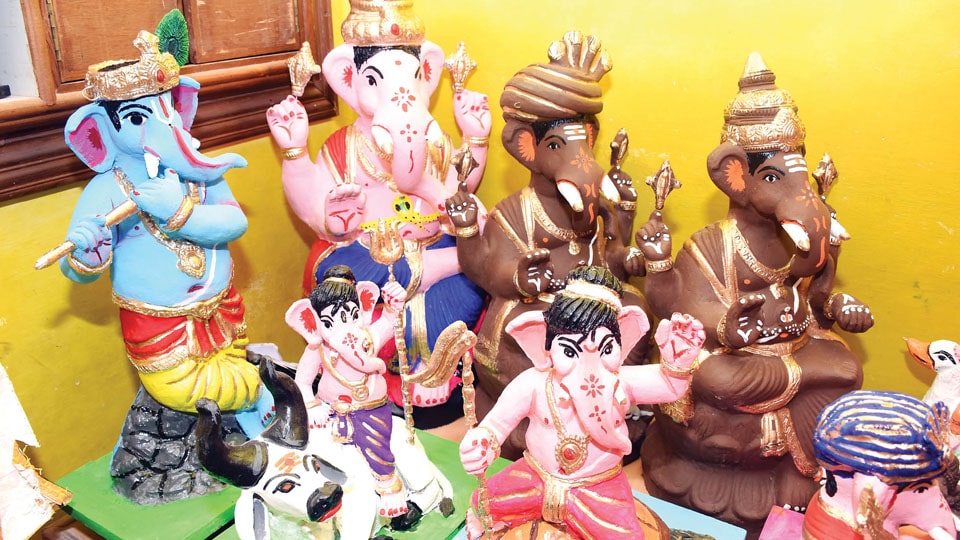 Bengaluru: The Karnataka Government has relaxed curbs on public celebration of Ganesh Chaturthi festival and allowed placing one Ganesh idol in one Ward in the limits of City Corporations and restricted the number of people to 20 at a time.

In addition to this, no celebrations will be allowed after 9 pm. The Government had also said that no procession will be allowed for the festivities. Only eco-friendly Ganesha idols should be used for celebrations, where the distribution of food and prasadam will be prohibited. No function will take place for Ganesh Chaturthi in districts where the Test Positivity Rate is above 2 percent.

The decision to allow conditional celebrations comes in the wake of fears looming large over the possible third wave of COVID hitting the State.

Chief Minister Basavaraj Bommai consulted domain experts and his Ministerial colleagues yesterday amid pressure being mounted on the Government to allow public celebrations of Ganesha festival and it was decided during an hour-long meeting that restricted permission can be given.

“The Government has decided to permit installation of Ganesha idols in public for a maximum of five days only in the districts where COVID Test Positivity Rate is less than 2 percent. The idols must be immersed within five days at designated ponds, but procession is not allowed while taking the idol for immersion,” said Revenue Minister R. Ashok after the meeting.

According to the guidelines issued after the meeting, only one public pandal is allowed in a civic Ward in urban areas, while local administration will decide on how many idols can be installed publicly in rural areas.

The area of a public pandal is restricted to 50×50 ft and it is a must that the organisers are vaccinated, said Ashok and added that the Government has asked the local bodies to hold vaccination drives for the organisers at the site of celebration. No idol installation or celebration is allowed at Schools and Colleges.

“We have decided not to allow cultural programmes at the pandals and DJ is strictly prohibited,” said Ashok adding the pandals should not be erected at places where it causes inconvenience to the public. The Government has capped the height of the idols at two feet if installed at homes and four feet for public installation, on the lines of last year’s restriction. It is mandated that the idol should be made of eco-friendly material,” he added.

Deputy Commissioners of border districts had been empowered to take decisions on granting permission to public celebrations of the festival depending on the COVID-19 cases.

The guidelines said all types of cultural and entertainment programmes were strictly prohibited during the festival. Processions have been banned during taking of idols to houses or public places for worship and during immersion. Idols have to be immersed at the designated tanks/ponds/mobile tanks identified by the local authorities.

Dr. C.N. Manjunath, Director of Sri Jayadeva Institute of Cardiovascular Sciences and Research, warned that these festivals could become potential super-spreaders if a large number of people are allowed to celebrate together.

Public celebration of Ganesha festival restricted to 5 days from Sept. 10

Idols must be immersed at designated ponds; 9 pm – 5 am curfew in force

Just one pandal, not bigger than 50x50ft, in one 1 Municipal Ward

Organisers must be vaccinated; if not, drives will be held at pandals

Only 20 people to be allowed into pandal at a time

Govt. caps height of idols at 2 ft. for homes and 4 ft. at pandals

Installation of Ganeshas in Schools and  Colleges not allowed