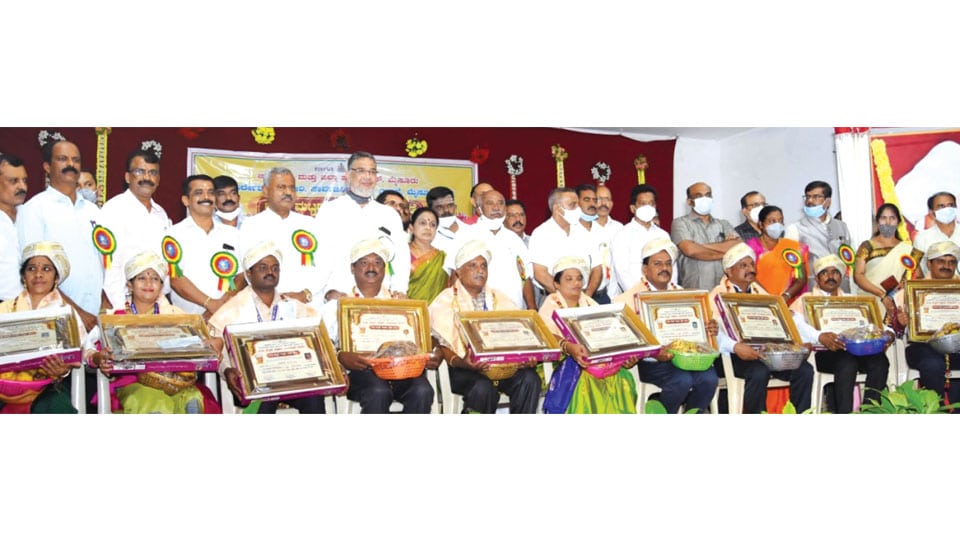 Mysore/Mysuru: Maintaining that teachers should educate students on future challenges, District Minister S.T. Somashekar said that teachers have played a significant role in the economic and  technological advancement of the country.

He was speaking at the Teachers Day celebration and District-level Best Teacher Award Conferment Ceremony organised jointly by the District Administration, Zilla Panchayat (ZP) and Department of Public Instruction at St. Mathias School here on Sunday.

Pointing out that Teachers Day is being celebrated on Sept. 5 marking the birth anniversary of former President of India Dr. Sarvepalli Radhakrishnan, who himself was a great teacher, Somashekar said that teachers have been making significant contributions for building a stronger and sturdy India.

Observing that teachers are in the forefront of correcting the wrongs in the society, he said that teachers should overcome various challenges that they have to face in their profession, with science and technology making rapid advancements.

Regretting that ‘Guru-Shishya’ tradition is fast disappearing, Somashekar said that online education is posing a challenge for teacher identity.

Noting that a new culture of ‘Google Teacher’ is fast gaining prominence, the Minister said that online education has deprived students of getting in regular  touch with their teachers.

MLC A.H. Vishwanath, in his address, said that he was opposed to unilateral implementation of new education policy, without the involvement of Primary and Secondary education.

Arguing that keeping out Primary education from the National Education Policy (NEP) is not correct, Vishwanath said that it is not wise on the part of the Government to trim only branches of a tree, while ignoring its root.

Stressing on the need for a wider debate on NEP, the MLC suggested distribution of booklets containing the full text of NEP, among  teachers, parents and all other stakeholders.

NR MLA Tanveer Sait, in his address, said that Government Schools are in greater demand now post COVID crisis. Maintaining that there should not be discrimination between Government, aided or private schools, he said that imparting quality education should be the main focus of educational institutions.

Stressing on the need for grooming children to become better citizens of the future, he said that teachers play a cricual role in correcting the society whenever it goes wrong.

Chamundeshwari MLA G.T. Devegowda said that teachers have the responsibility of moulding the future of children.

Highlighting the achievements of Dr. S. Radhakrishnan, he said that teachers must educate the students on the ideals and principles of the former President of India, who was an exemplary teacher himself and whose birth anniversary is being celebrated as Teachers Day.

A total of 30 teachers were conferred with District-level Best Teacher Award on the occasion.