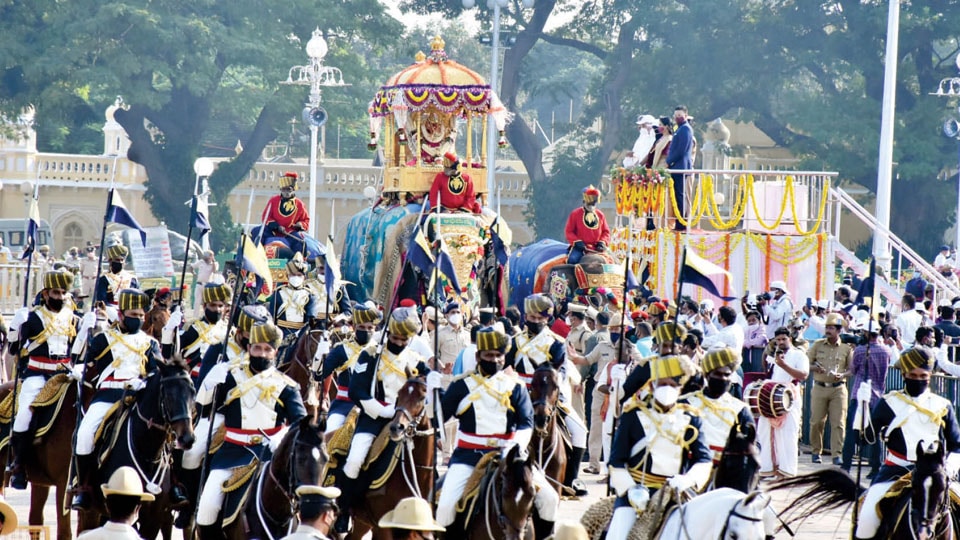 Mysore/Mysuru: In what is perhaps for the first time, District Minister S.T. Somashekar on Sunday gave a detailed account of Dasara-2020 expenses, though held in a simple manner this year, within a week of Vijayadashami marking the culmination of the ten-day Dasara festival that was celebrated between Oct.17 and Oct. 26.

The Government, which had kept the festival a low-key due to the outbreak of the deadly COVID-19 contagion, had sanctioned Rs.10 crore for the 410th Nada Habba, while MUDA had promised to give Rs.5 crore, if necessary.

Releasing details of the expenditure in public after taking part in the Kannada Rajyotsava celebrations at Kote Anjaneyaswamy temple at the Palace North Gate here yesterday, Somashekar said the Government spent a total of Rs. 2.91 crore including Rs.50 lakh given for Srirangapatna Dasara and Rs.36 lakh for Chamarajanagar Dasara.

Pointing out that Rs. 2,05,83,167 was spent for the ten-day Mysuru Dasara festivities, he said that the balance amount of Rs.7,08,16,833 is in the bank account of Mysuru Deputy Commissioner. The authorities will await directions from the Chief Minister on what to do with the unspent money, he added.

Giving a break-up of Dasara expenditures, Somashekar said Rs.2,05,83,167 was spent under a total of 23 categories, with the highest amount of Rs.44,78,000 spent on cultural programmes and payment of remuneration to artistes and musicians.

The other expenses included Rs.35 lakh for Dasara elephants, which is the lowest on this account in recent years, Rs.41.08 lakh for erecting stages, including the one at Chamundi Hill for the inauguration on Oct.17, Rs.40 lakh as honorarium to erstwhile Mysore Royal family, Rs.16.94 lakh for Jumboo Savari within the Palace premises on Oct.26, Rs.5,70,683 for live telecast of Jumboo Savari, Rs.5.9 lakh for live relay of cultural programmes through Internet, Rs.4.1 lakh for making two tableaux that were part of the Dasara procession and  Rs.12,32,484 for miscellaneous expenses, he pointed out.

When asked whether the Royal family members had to be paid Rs.40 lakh when the Dasara was a simple one this year, Somashekar clarified that the payment of Rs.40 lakh honorarium had been in practice for years and the money was paid in keeping with that practice.

Replying to a query on whether Rs.41 lakh spent for erecting stages was not too high, the Minister said that the expenses for stage erections was paid in accordance with the prevalent rates of Public Works Department (PWD).