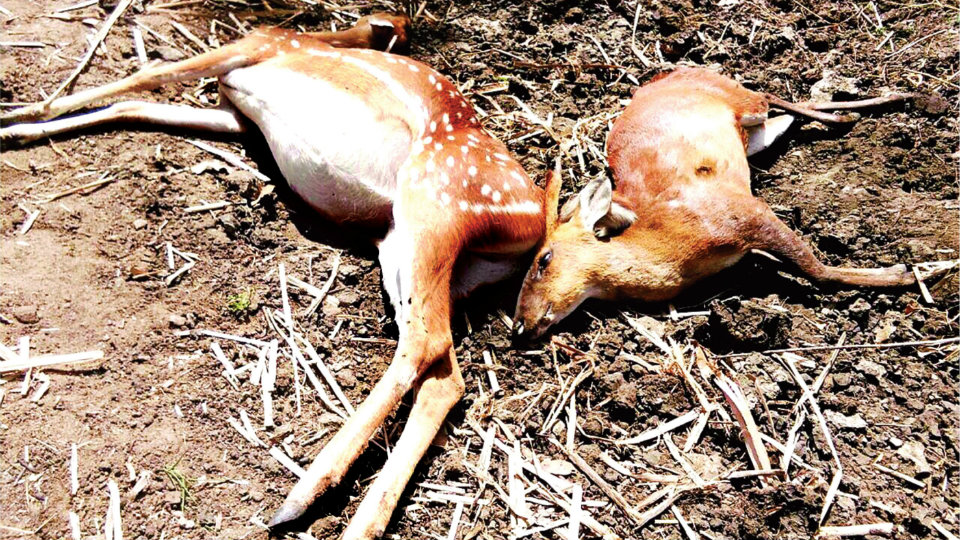 Shockingly, the animals died of poisoning when they drank water-laden with urea from the Hebbala pond in J.M. Halli village that is less than a kilometre from the Nagarahole forests. The incident came to light when Forest Department personnel were on a patrol. While a few animals were found dead inside a plantation, a few were found in a nearby farm.

Conservator of Forest and Director of Nagarahole Tiger Reserve, S. Manikantan suspected that the animals might have died after drinking the water from the pond. While all the five spotted deer were female, four of the seven wild goats were female.

The Nagarahole National Park and the Bandipur Tiger Reserve are reeling under the impact of severe drought and extreme water stress where the animals are crossing the forest boundaries in search of water holes. Though the pond at J.M. Halli is outside the national park boundary limits, the area is frequented by animals as it is part of their migratory path.

Samples of water and the viscera of the carcasses have now been sent to forensic laboratory to ascertain the poison content and according to forest officials, the post-mortem revealed the presence of urea-like substance inside the stomachs of the animals. The pond has been closed with soil as a precautionary measure.

Officials said that some miscreants living at the fringes of the national park liberally sprinkle urea in water bodies as they are frequented by deer and other species of animals to quench their thirst. After the animals drink the poisoned water, miscreants followed them and poach them for meat once they fall exhausted. They also said that plantation owners mix water with urea to avoid animals from drinking scarce water and also to use it as a fertiliser.