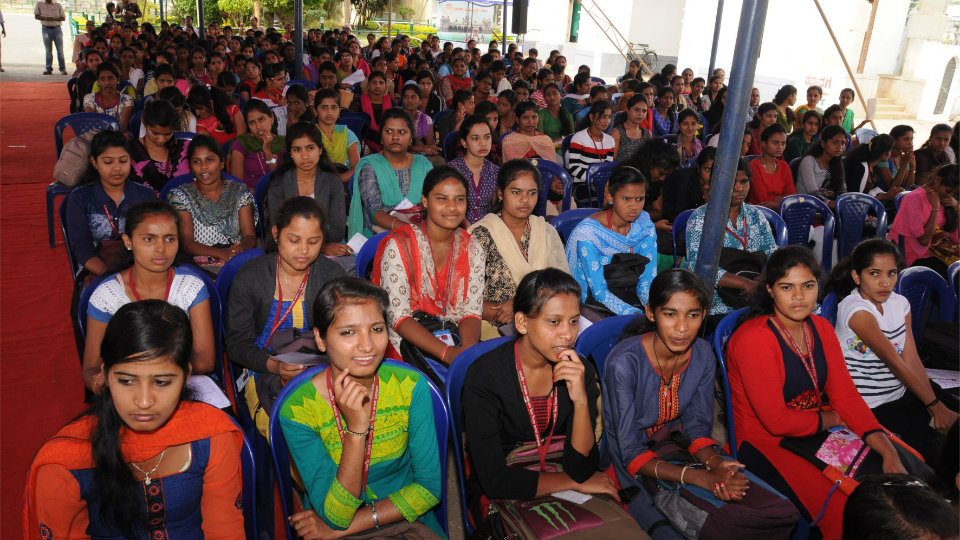 Mysuru: More than 5,000 job-seekers thronged the Dasara Exhibition Grounds where a Mega Job Mela was organised by M.K. Somashekar Abhimanigala Balaga this morning as part of MLA M.K. Somashekar’s birthday.

Job aspirants from Mysuru, Mandya, Chamarajanagar, Nanjangud, T. Narasipur and surrounding places landed at the venue where more than 45 companies are recruiting candidates with qualifications like SSLC, PUC, Diploma, BE, B.Com, M.Com and B.Tech.

Each company has been provided with a separate kiosk and the company representatives were seen conducting interviews at their kiosks.

Vinay Kanagal of the Balaga, speaking to SOM said that to avoid inconvenience to the job seekers who have to go in search of a photo copier, a machine has been set up at the venue and even canteen facility is made where candidates can have food at a low price.

He said that candidates have come even from Gadag, Hubballi and Periyapatna.

Earlier, the job mela was inaugurated by Sugar Minister Dr. Geetha Mahadevaprasad. Speaking on the occasion, she said that MLA Somashekar, who is conducting such events since 20 years, had not limited himself only to his constituency but was doing good work for everyone especially to those seeking jobs.

She said that such melas have become a good platform for youths to get jobs of their choice and called upon the candidates to make best use of it.

MLA M.K. Somashekar, who also spoke said that the Balaga has been conducting Job Melas and other social works in city on his birthday since many years and added that more than 20,000 candidates have been recruited through job melas.

KEA Chairman B. Siddaraju, Mylac Chairman H.A. Venkatesh and others were present.