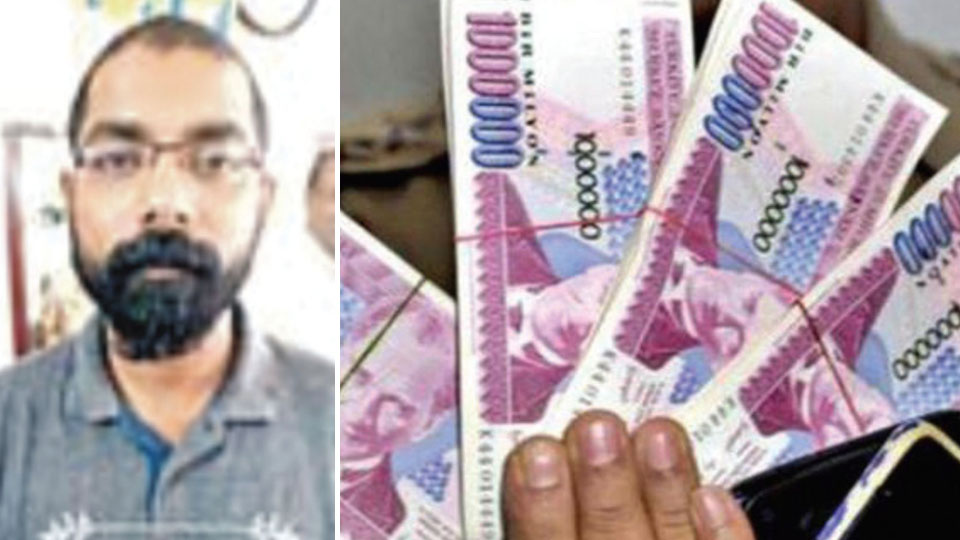 Bengaluru/ Mysuru: A software engineer from Kerala who completed his engineering degree at a prestigious college in Mysuru has been arrested by the RMC Yard Police in Bengaluru for trying to sell high-value (one million) Turkish currency which was banned (demonetised) in 2005.

Thirty-five-year-old Deepesh is a native of Trissur in Kerala and a resident of HSR Layout 11th Cross. He worked as a software engineer at a reputed Multi-National Company (MNC) at Bellandur in Bengaluru. The Police have 100 such notes, worth more than Rs.170 crore.

The Turkish Government had invalidated the one-million Lira bank note in 2005. Effectively, these bills are nothing but worthless pieces of paper.

Deepesh had approached some businessmen near Govardhan Talkies at Yeshwantpur to convince them that he had Turkish Lira and he could be rich overnight by selling them. Starting December 22, 2017, he frequently visited shopkeepers near the theatre in Yeshwantpur. He would tell them he had 100 Liras of the one-million denomination. At the current exchange rate, the notes were worth Rs.170 crore, he claimed and offered to exchange them for a “measly” Rs.30 lakh.

But Deepesh would hide the fact that the currency was demonetised in the wake of hyperinflation in Turkey. Before being banned, a one-million Lira banknote would hardly buy even a scoop of ice cream. One of the shopkeepers clearly saw through Deepesh’s plan. He searched the internet and found out about the demonetisation.

The businessman then alerted the Police and told them that Deepesh had approached him a couple of times and gave a few samples of currency notes.

Raghu Prasad, a Sub-Inspector at the RMC Yard Police Station, formed a team to track Deepesh down.

The sleuths rented a car and went in plain clothes as customers. They told Deepesh they were ready to buy all the Turkish Lira notes from him and asked him to get some more. Deepesh said he had just 100 notes of the one-million denomination and promised to try to get more. The Police immediately arrested him and seized his motorcycle.

Deepesh later told the Police that a man named Farooq Abdullah from Shivajinagar had given him the currency and told to sell it for Rs.30 lakh. He offered him a 20% commission. Farooq’s mobile phone is now switched off, Deepesh said.

The Police suspect Deepesh has links with Channakeshava Reddy, a landlord from Telangana, who was selling the banned Turkish Lira in Karnataka.

Hiriyur Police arrested Reddy in October 2016 and seized Rs.87.69 crore worth of Turkish Lira from him.

Reddy’s associate, Nagaraju, a Constable from Chitradurga, was arrested in June 2017 with Rs.70.25 crore worth of Turkish Lira. The Police are also on the lookout for Farooq.