Home » Columns » Abracadabra By K. B. Ganapathy » 55 Years After: A Memorial to an Indian Martyr 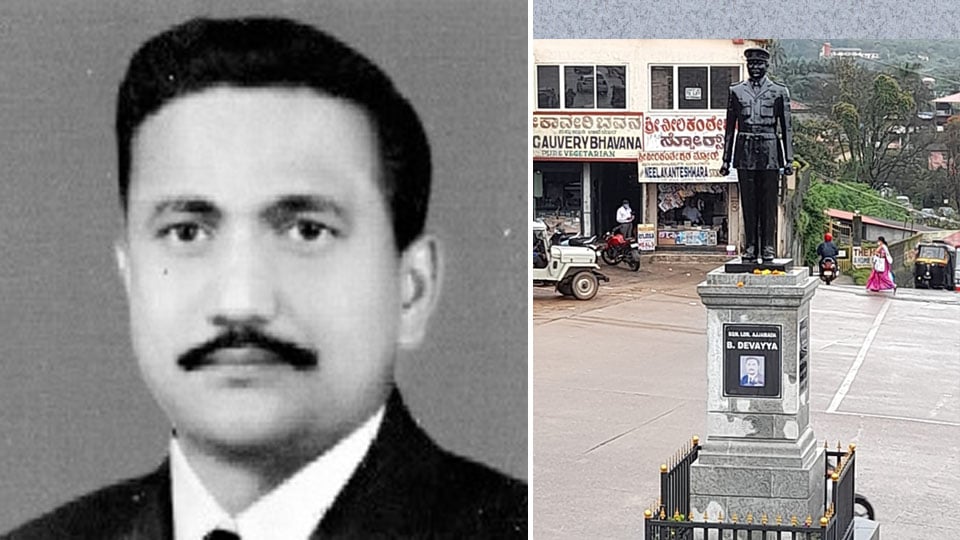 55 Years After: A Memorial to an Indian Martyr

When I read the poem ‘Elegy Written in a Country Churchyard’ by the English poet Thomas Gray (1751) many years ago, I found many quotable quotes in that rather long poem. But the one that remained in my memory and used it in some of my writings about our heroes and achievers who go unrecognised by the society is this particular quotation. I guess those are the four immortal sentences in that poem because, I know, in this world many achievers, geniuses and those who sacrificed their lives for the cause of humanity — gems of purest ray and flowers of great sweetness — are still remaining unknown and unrecognised. Let me quote those four lines:

Full many a gem of purest ray serene,

Full many a flower is born to blush unseen,

And waste its sweetness on the desert air.

I remembered these verses of Thomas Gray’s poem while reading the report on the unveiling of life-size statue of gallant Fighter Pilot Squadron Leader Ajjamada Bopayya Devayya (A.B. Devayya) in Madikeri, Kodagu, on 7th September 2020. He too would have become a ‘gem of purest ray serene’ buried in the ‘unfathomed caves of ocean’ or would have been a flower born to blush unseen, but for the publication of a book titled “Battle for Pakistan” authored by John Fricker, an English journalist, based on interviews he conducted with Pakistan Air Force (PAF) Pilots.

The then Flight Lieutenant Amjad Hussain of PAF had narrated in that interview about the India-Pakistan War of 1965. He told the journalist that after accomplishing a successful raid over Pakistan’s Sargodha Airfield at the appointed time by IAF Fighter Aircraft, all Subsonic Mystere Aircraft, they were returning to their base in India. But the PAF’s Flight Lieutenant Amjad Hussain, who was piloting a superior aircraft to that of India’s, Supersonic Mach 2, F-104 Starfighter Aircraft, intercepted the Indian aircraft   piloted by Squadron Leader A.B. Devayya.

About this incident, a reader of Star of Mysore, a veteran of IAF and the then President of Air Force Friends Association, Mysore, Mandetira N. Subramani, had written an article in Star of Mysore on 27.10.2000 (20 years back). There, in that article, he says “Neither the PAF pilot’s flying skill nor the F-104 Starfighter’s superior fire-power and speed deterred Squadron Leader A.B. Devayya. With single-minded devotion and rare courage,              he ultimately succeeded in shooting down the PAF plane with the pilot Amjad Hussain safely ejecting.”

All the IAF Fighter Pilots, 6 of them, who were involved in the task of bombing the heavily defended Pakistan Airfield, returned to the Indian base at Adampur. But one pilot was listed as “missing in action.” He was  Squadron Leader Ajjamada Bopayya Devayya. And he, apparently remained a “missing in action” officer all the years till the book titled “Battle for Pakistan” was published many years later and aroused the interest of another Indian IAF Officer Group Captain O.P. Taneja, Vir Chakra (retired).

Subsequently, mercifully, the Air Head Quarters conducted a careful investigation and innumerable interviews with the IAF Pilots who flew with Squadron Leader A.B. Devayya to confirm the veracity of what was written about Devayya in that book. Finally, he was conferred the honour of Maha Vir Chakra (MVC) posthumously. A martyr at last recognised. Thanks to people like the English journalist who wrote that book, to Flight Lieutenant Amjad Hussain of PAF for being so honest about a war situation, to Group Captain O.P. Taneja and nearer home our Veteran Sergeant M.N. Subramani  (a retired Senior Non-Commissioned Officer of IAF), who pursued his efforts to get our people here to recognise and properly reward Sqn. Ldr. Devayya.

I am sure, M.N. Subramani must be among the most happy persons to see that statue unveiled on 7th September 2020, 55 years after the War Hero A.B. Devayya was martyred on 7th September 1965. And not to forget, it was M.N. Subramani, presently the President of VeKare Ex-Servicemen Trust (VKET), who was instrumental in naming our city’s Sainik Aram Ghar as Squadron Leader A.B. Devayya Bhavan, despite protests from a section of the people.

I remembered all these events after reading the statue unveiling report. We are fortunate that Sqn. Ldr. A.B. Devayya did not remain a “missing pilot” forever and an Air Force Officer with fame “unknown.” Let us remember the famous epitaph in the  Kohima War Cemetery:

“When you go home

Tell them of us and say

We gave our today.”

2 COMMENTS ON THIS POST To “55 Years After: A Memorial to an Indian Martyr”