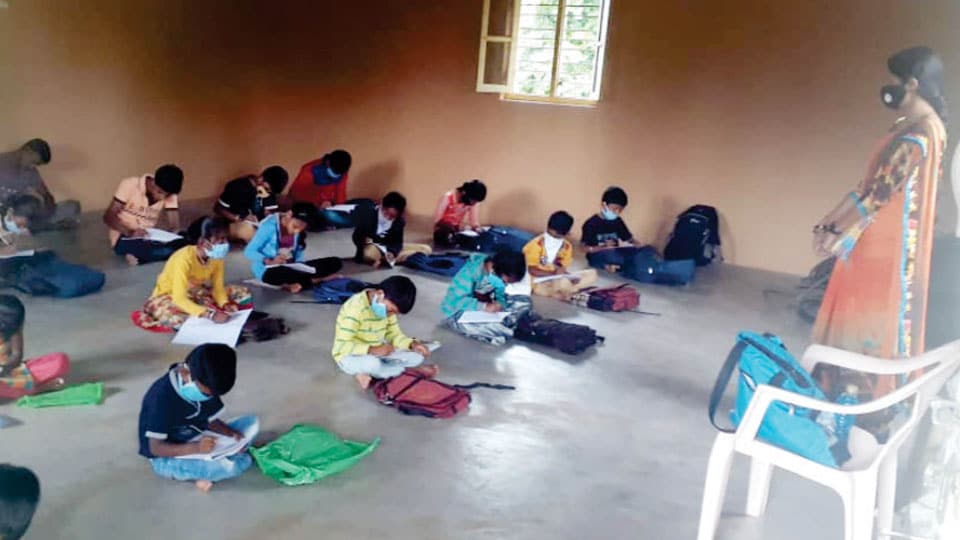 Mysore/Mysuru: In the wake of the COVID-19 pandemic, the Education Department has launched Vidyagama, a continuous learning plan for children. In Mysuru district, the scheme has been implemented in 60 percent of school children.

Under the scheme, every child is covered which also promotes self-learning in children. Special attention is given to out-of-school and specially-abled children while food materials of the midday meal scheme will be sent to the homes of Government and aided school children.

Every school must form a virtual class with 20-25 students and appoint a mentor. Based on the geographical area of their residences, children are grouped from classes 1-5 as one group, 6-8 as another, and 8-10 as yet another. Parents and children are guided to continue their self-learning at home making use of the learning materials provided.

Education Department officials told Star of Mysore that except for areas hit by floods, the rest 60 to 65 percent of the children have been included in the scheme and the ambitious project has been implemented.

Block Education Officers of the respective areas have been successful in convincing parents. Free books have been distributed at cluster level and 90 percent of the task has been completed, said officials.

Children are grouped in different categories — those without any type of technology-based gadgets, including mobile phones, those with mobiles but no Internet access, and those with computers/ tabs/ smart phones with Internet access. Learning process is continued as per the requirement, the officials added.

Mentors are visiting homes of children in their neighbourhood as many times as possible in a week to monitor their progress in learning and co-curricular activities. These meetings are conducted in community centres, houses of village elders and other halls following the norms of social distancing strictly.

In Mysuru, the Vidyagama scheme has been implemented in all the taluks and Periyapatna taluk stands at 55 percent implementation, Hunsur (72 percent), H.D. Kote (60 percent), K.R. Nagar (70 percent), T. Narasipur (65 percent), and Nanjangud (68 percent). In Mysuru city and taluk, 70 percent of the students have been covered under the scheme, officials added.

Hunsur Block Education Officer Nagaraj said that there are over 20,000 students studying from first standard to 10th in the taluk and 72 percent students have been covered under Vidyagama.

“They have already started academic activities. There is a hindrance of bringing students under the scheme in tribal hadis and flood-affected areas. They too will be covered in a couple of days,” he added.