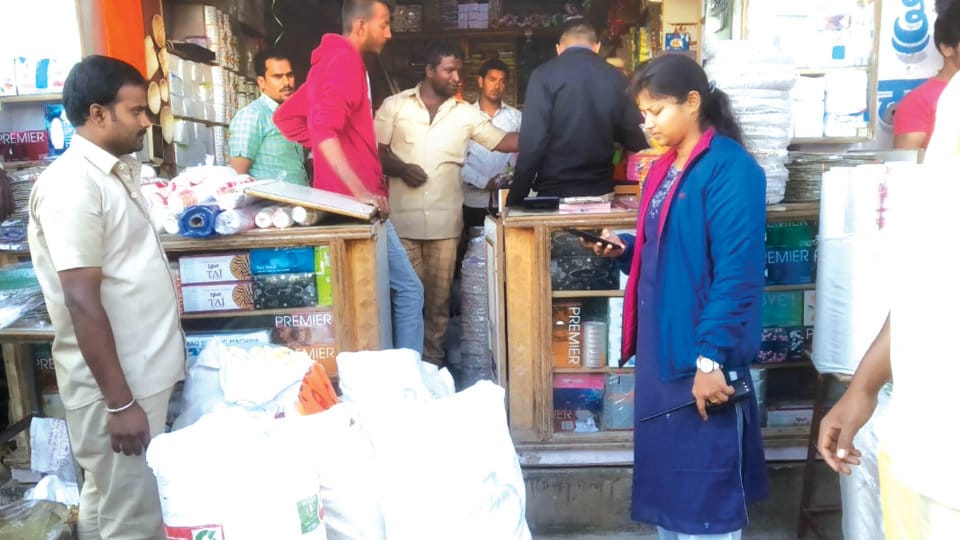 Mysuru/Mysore: Team of Mysuru City Corporation (MCC) officials, lead by Assistant Commissioner Geetha Hudeda and Environment Engineer S. Mythri, along with Abhaya team members, raided Raj Tradings shop in Shivarampet here yesterday and have seized about 90-kg of banned plastic covers and carry bags from the shop and imposed a penalty of Rs.10,000 on the owner of the shop.

The MCC officials had earlier issued warning to the shopkeepers not to sell the banned single-use plastic items in future, failing which stern action would be initiated against them (shopkeepers).

Despite issuing warning to shops and other manufacturing units in city, at least five times to Raj Tradings, they were allegedly selling banned plastic items. Acting on a tip off, MCC officials raided the premises of the trader and imposed a penalty of Rs.10,000 to the owner yesterday.

Authorities have claimed that the raids are a continuous process and strict action will be initiated against the violators.

MCC banned single-use plastic items a few years ago and since then, the raids have been conducted on several shops in many parts of the city, but banded plastic covers are being transported from other cities like Bengaluru, according to authorities.